I measured the Matrix Cinema ANCs using a G.R.A.S. Model 43AG ear/cheek simulator/RA0402 ear simulator with the KB5000 and KB5001 anthropomorphic simulated pinnae, a Clio 10 FW audio analyzer, a laptop computer running TrueRTA software with an M-Audio MobilePre USB audio interface, and a Musical Fidelity V-CAN amp. For measurements in Bluetooth mode, I used a MEE Audio Connect Bluetooth transmitter to get the signal to the headphones. These are “flat” measurements; no diffuse-field or free-field compensation curve was employed. 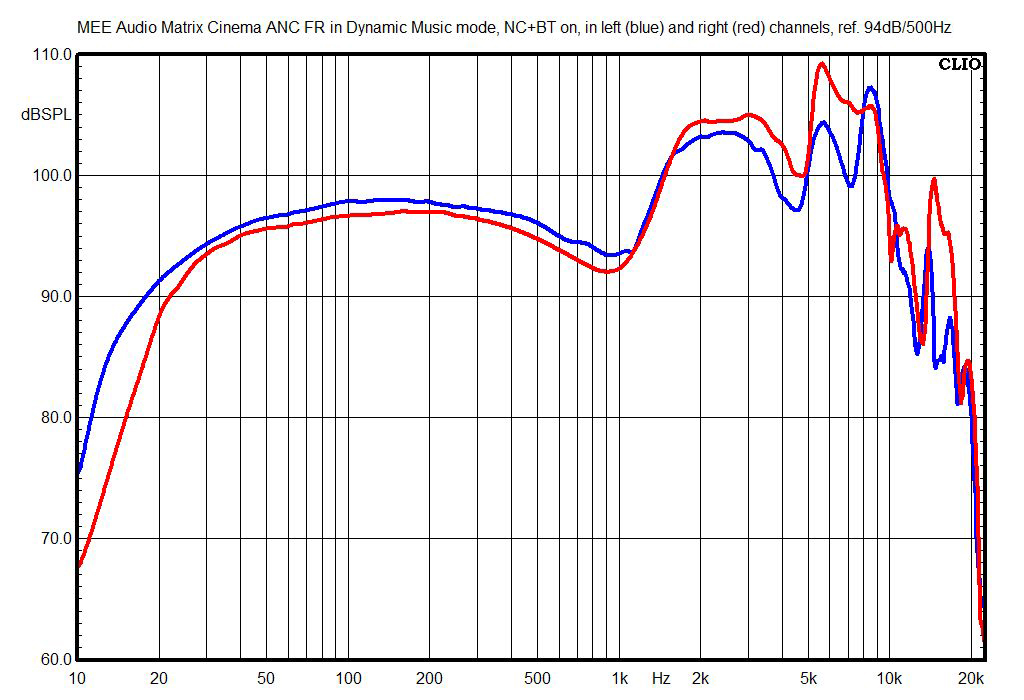 The above chart shows the Matrix Cinema ANCs’ frequency response measured in what I expect will be its most-used mode: Bluetooth and noise canceling on, with the Dynamic Music mode selected. This curve is unusual mostly in that it’s tilted toward the treble, and the broad bass/lower-midrange hump below 1kHz will likely give the bass a somewhat boomy quality. 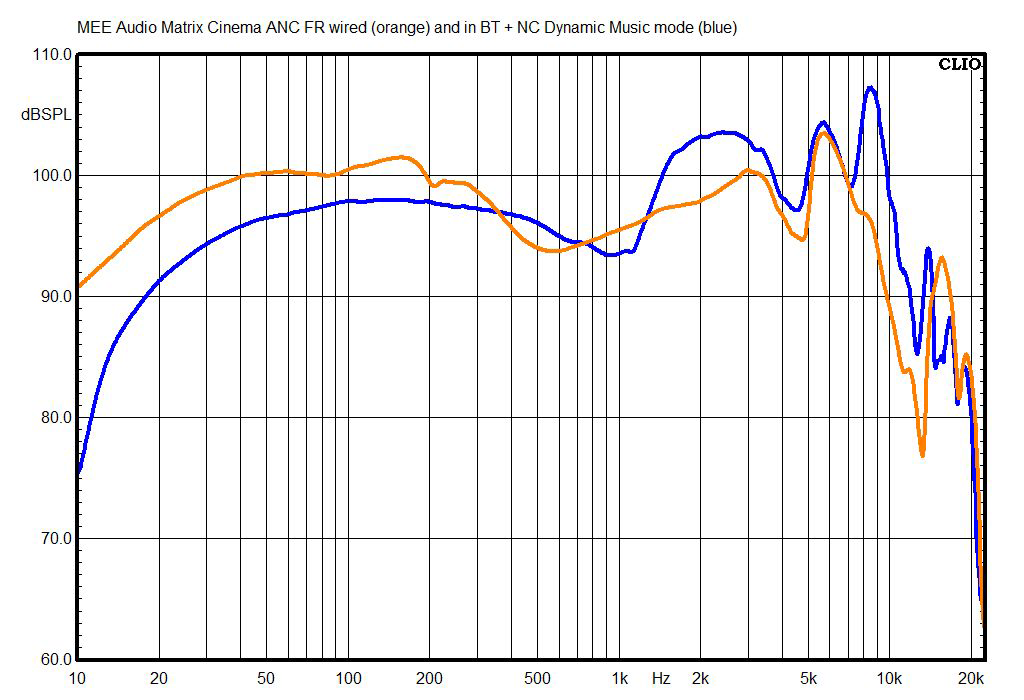 This chart compared the response of the Matrix Cinema ANCs using Bluetooth (with ANC on in Dynamic Music mode) versus using a wired connection with ANC off. As my listening experience suggests, the wired model with the processing off delivers the most balanced frequency-response measurement. 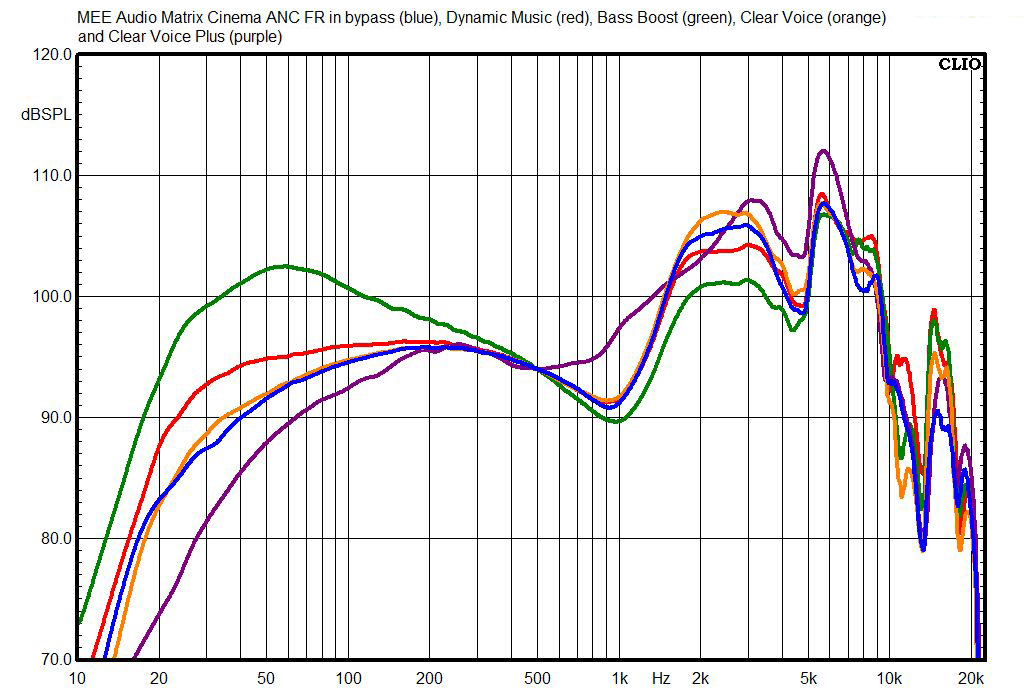 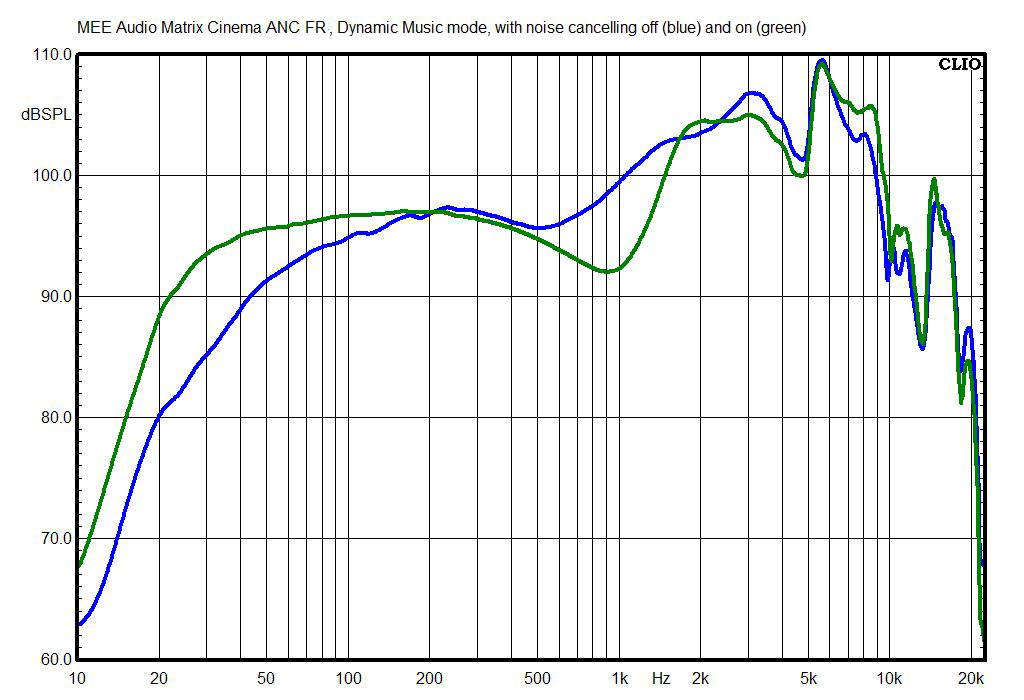 This chart compares the response with Bluetooth on in Dynamic Music mode, with noise canceling on and off. 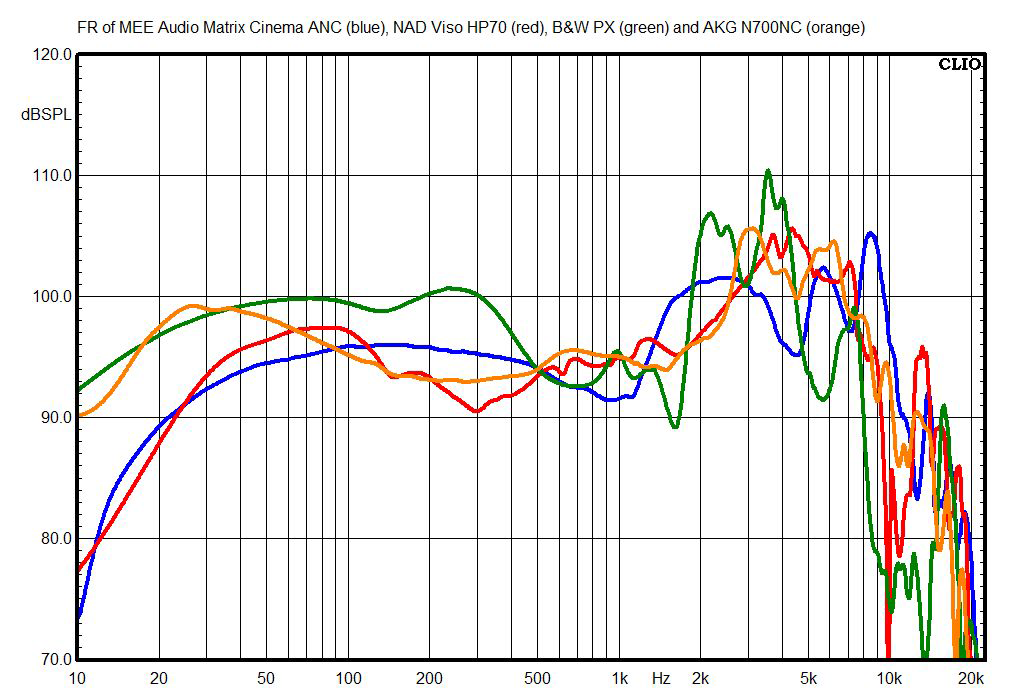 This chart shows the Matrix Cinema ANCs’ right-channel response with Bluetooth and noise canceling on in Dynamic Music mode, compared with other over-ear models (all in Bluetooth mode with noise canceling on). The only anomalous quality of the MEEs is that compared with the other headphones, they have a lot more energy above 5kHz relative to the level of midrange and bass, which should make them sound a little brighter than average. 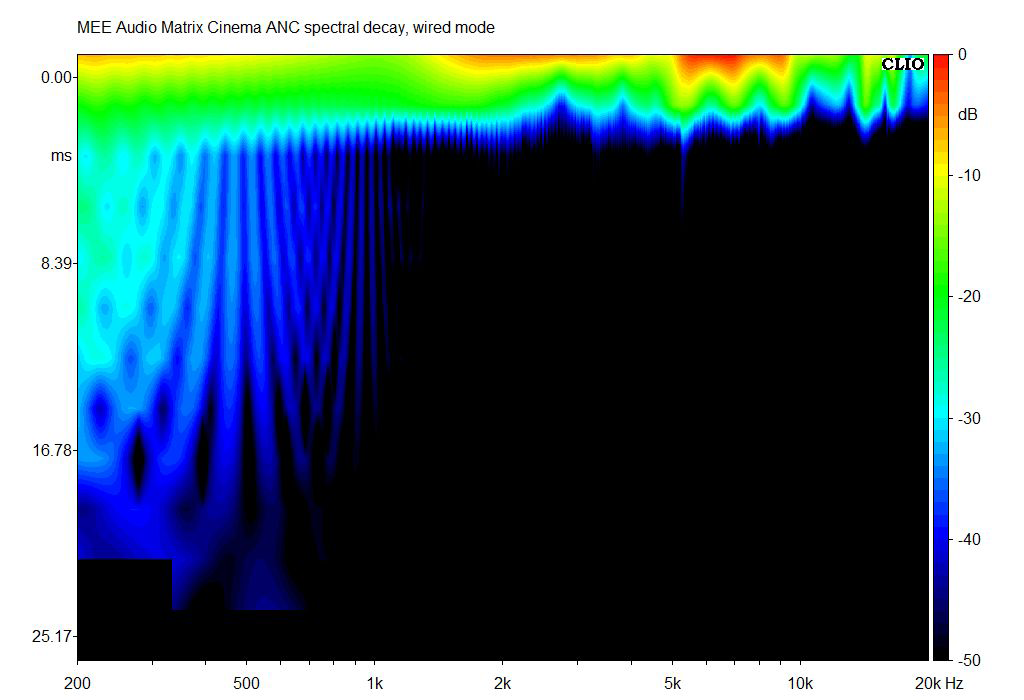 The Matrix Cinema ANCs’ spectral decay (waterfall) chart -- measured with a wired connection because of Bluetooth’s latency -- is free of significant resonances. 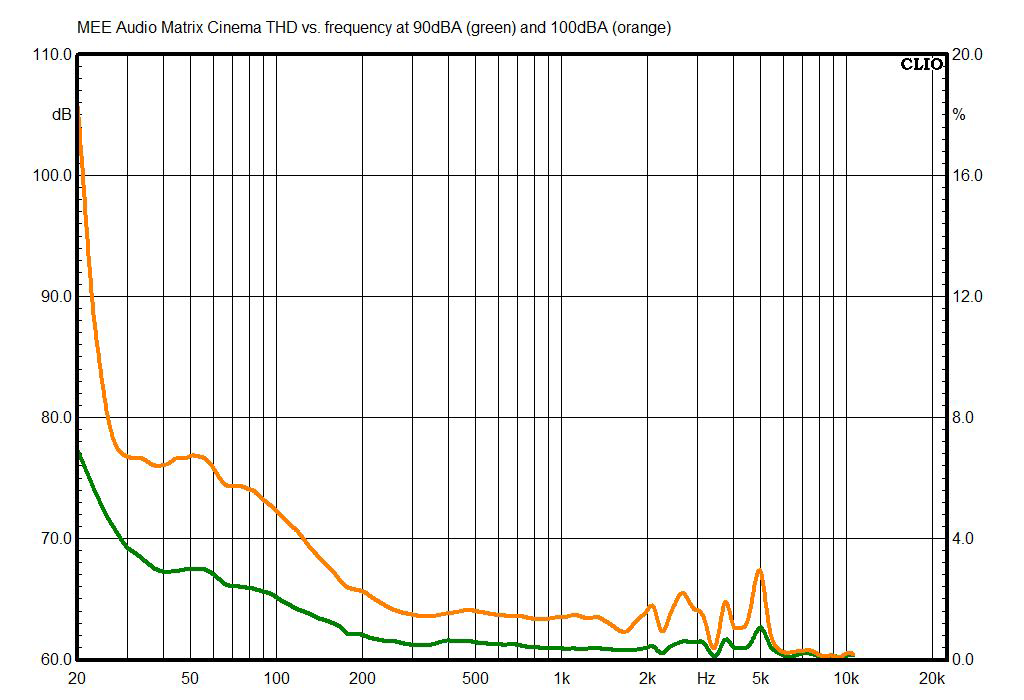 The Matrix Cinema ANCs’ distortion is measured here with a wired connection; the internal amps of the headphones may add some distortion, but my analyzer can’t compensate for Bluetooth’s latency when doing distortion measurements. You can see that the distortion is present but fairly modest at the loud level of 90dBA, hitting about 2.5% at 100Hz and 7% at 20Hz. At the extremely loud level of 100dBA it gets high: 5% at 100Hz and 17% at 20Hz. These levels of distortion may seem scary compared with measured amplifier distortion (which is typically under 0.5%), but distortion in transducers doesn’t seem as noticeable. That said, I did notice some fleeting distortion at times when playing loud, bass-heavy music. 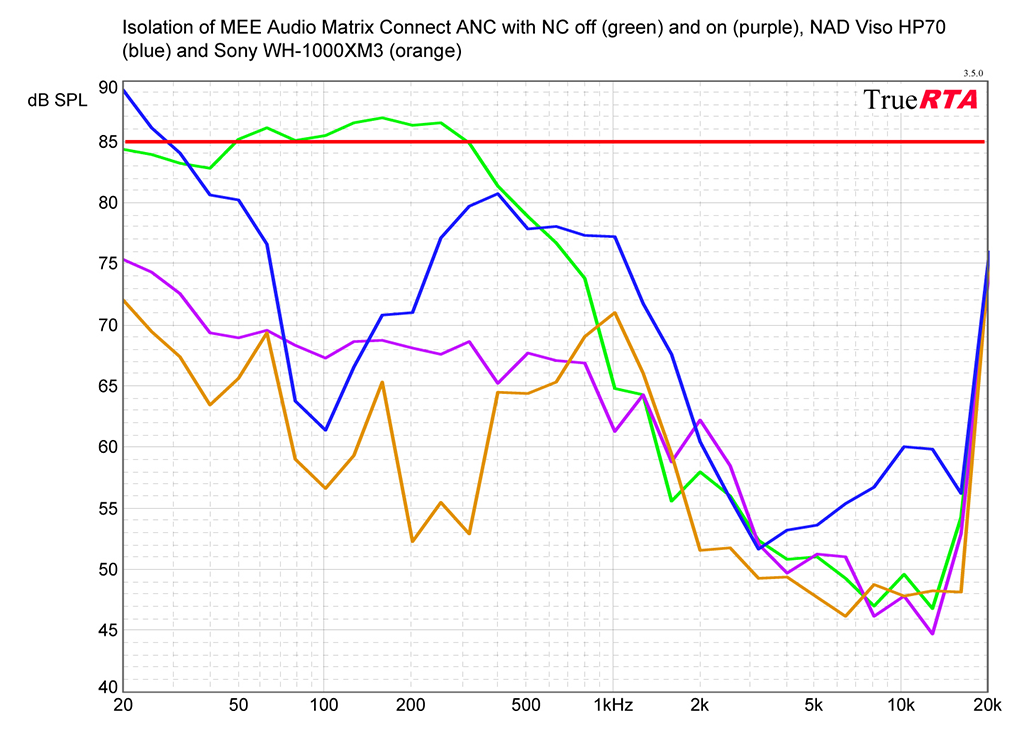 In this chart, the external noise level is 85dB SPL, and numbers below that indicate the degree of attenuation of outside sounds. The Matrix Cinema ANCs’ isolation is quite good in the “airplane band” between about 100Hz and 1kHz, reducing noise by an average of 17dB, and delivering surprisingly even noise reduction through this range. 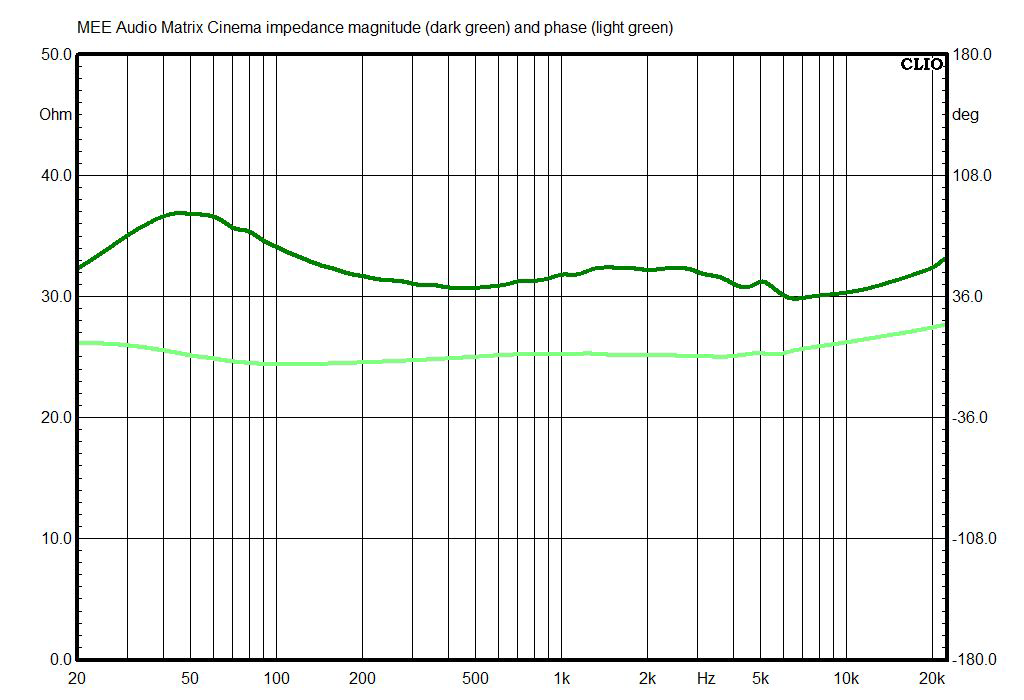 Latency of the Matrix Cinema ANCs used with the MEE Audio Connect transmitter was 34ms, which is typical for headphones using the aptX Low Latency codec. Thus, you will not experience lip-sync problems using them for video or gaming. Sensitivity of the Matrix Cinema ANCs with a wired connection with ANC off, measured between 300Hz and 3kHz using a 1mW signal calculated for the rated 32-ohms impedance is 105.9dB, which will deliver plenty of volume when you plug into an airliner’s inflight entertainment system.