I measured the BT One headphones using a G.R.A.S. Model 43AG ear/cheek simulator/RA0402 ear simulator with the KB5000 and KB5001 anthropomorphic simulated pinnae, a Clio 10 FW audio analyzer, a laptop computer running TrueRTA software with an M-Audio MobilePre USB audio interface, and a Musical Fidelity V-CAN amp. For measurements in Bluetooth mode, I used a MEE Audio Connect Bluetooth transmitter to get the signal to the headphones. These are “flat” measurements; no diffuse-field or free-field compensation curve was employed. 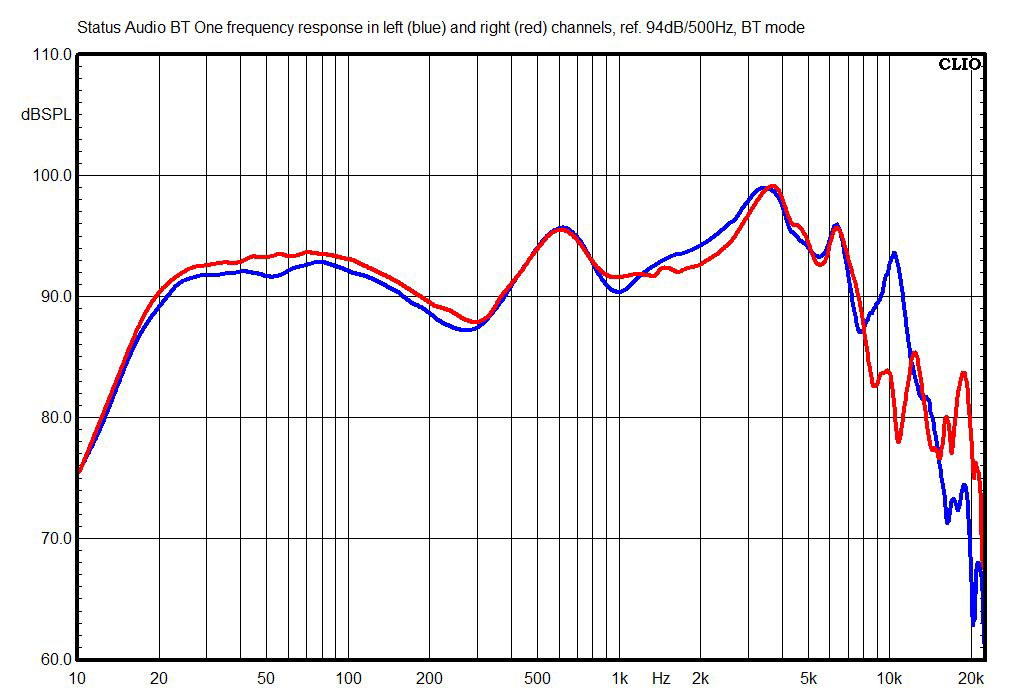 The above chart shows the BT Ones’ frequency response measured in Bluetooth mode. This is an unusual result in many ways. The elevated plateau in the bass response from about 25 to 150Hz is reminiscent of the bass bump found in the Harman target curve. The midrange bump centered at 600Hz is extremely unusual; I’m sure I’ve measured a headphone with a similar peak at some point, but I sure can’t remember which one it might have been. The response peak centered at 3.5kHz is a common feature of headphone response, although about 500Hz higher in frequency than I usually expect to see it. 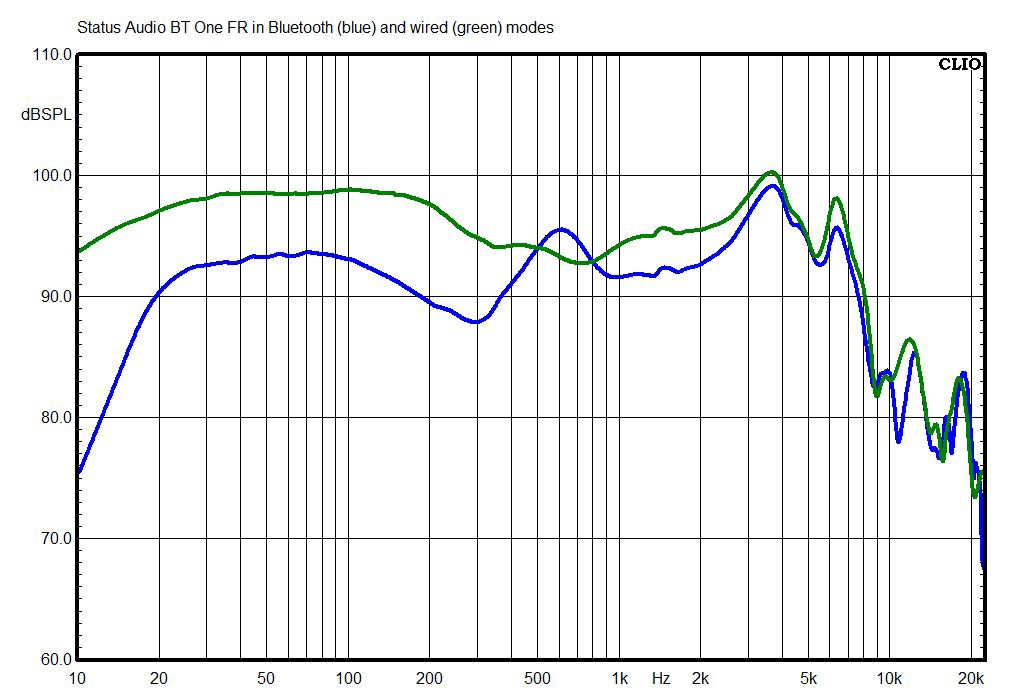 This chart compared the response of the BT Ones using Bluetooth versus using a wired connection. Interestingly, the midrange bump seen in BT mode vanishes in wired mode, and the response looks more typical. 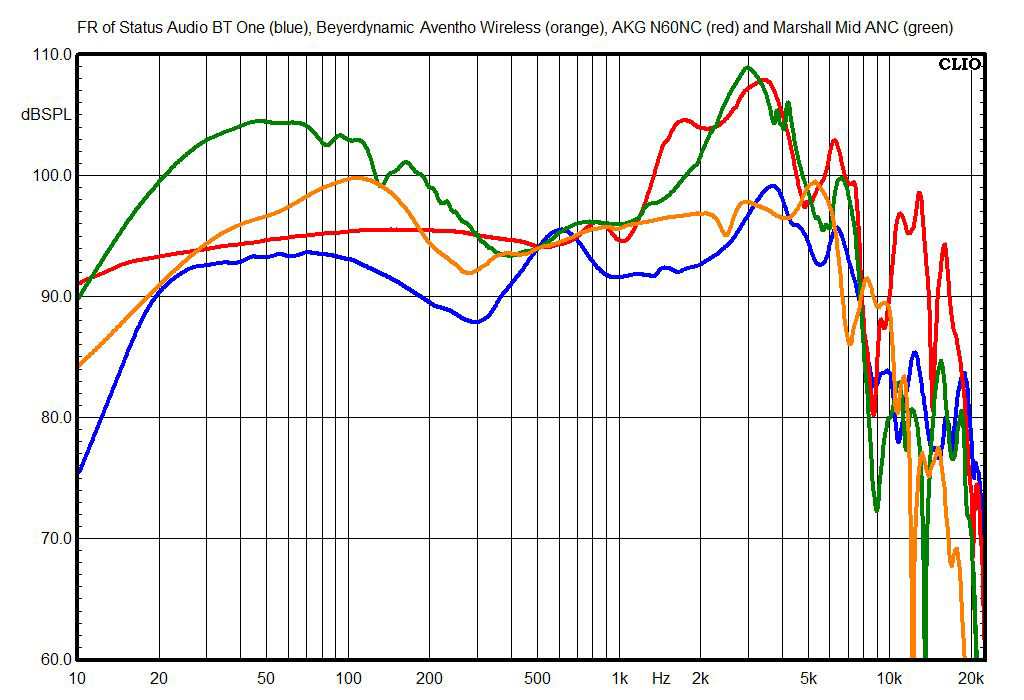 This chart shows the BT Ones’ right-channel response compared with other over-ear models, including the AKG N60NCs (shown with noise canceling on; thes headphones come fairly close to the Harman target curve), the Beyerdynamic Aventho Wirelesses, and the Marshall Mid A.N.C.s (also with noise canceling on). These curves are normalized at 500Hz; if you elevated the BT Ones’ curve by a few dB, it would look a lot more like the others, except for its unusual peak at 600Hz. 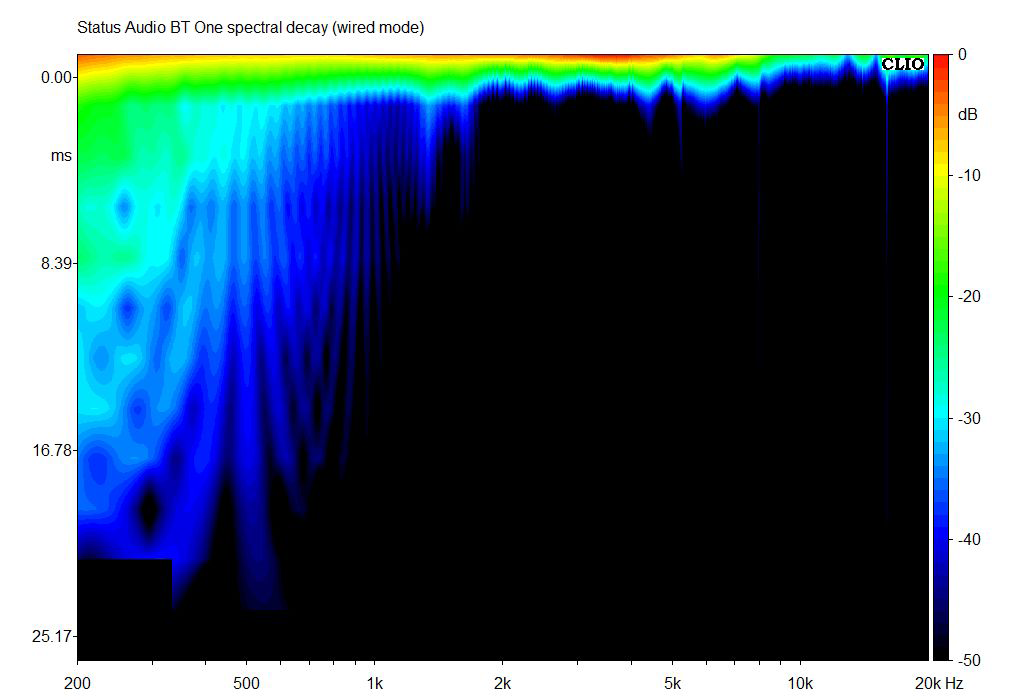 The BT Ones’ spectral decay (waterfall) chart looks mostly free of resonances, except for a little bit below 400Hz. 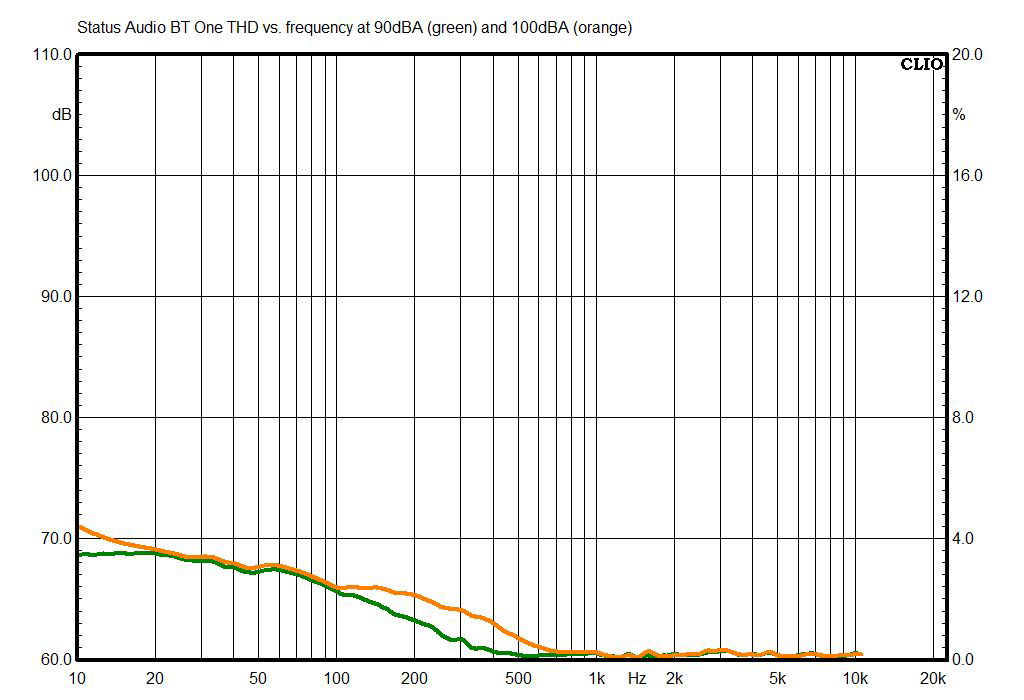 The BT Ones’ distortion is measured here with a wired connection; the internal amps of the BT Ones may add some distortion, but my analyzer can’t compensate for Bluetooth’s latency when doing distortion measurements. You can see that the distortion is a little higher than average, hitting about 2.5% at 100Hz and 3.5% at 20Hz. Surprisingly, the distortion didn’t increase all that much when I went from 90dBA to 100dBA; it rose by an additional 1% on average between 100 and 600Hz. Note that distortion of headphones and speakers is not as audible as distortion of amplifiers, so it’s unlikely you’d notice this distortion unless you had the BT Ones cranked up all the way with bass-heavy material that features a lot of dynamic range compression. 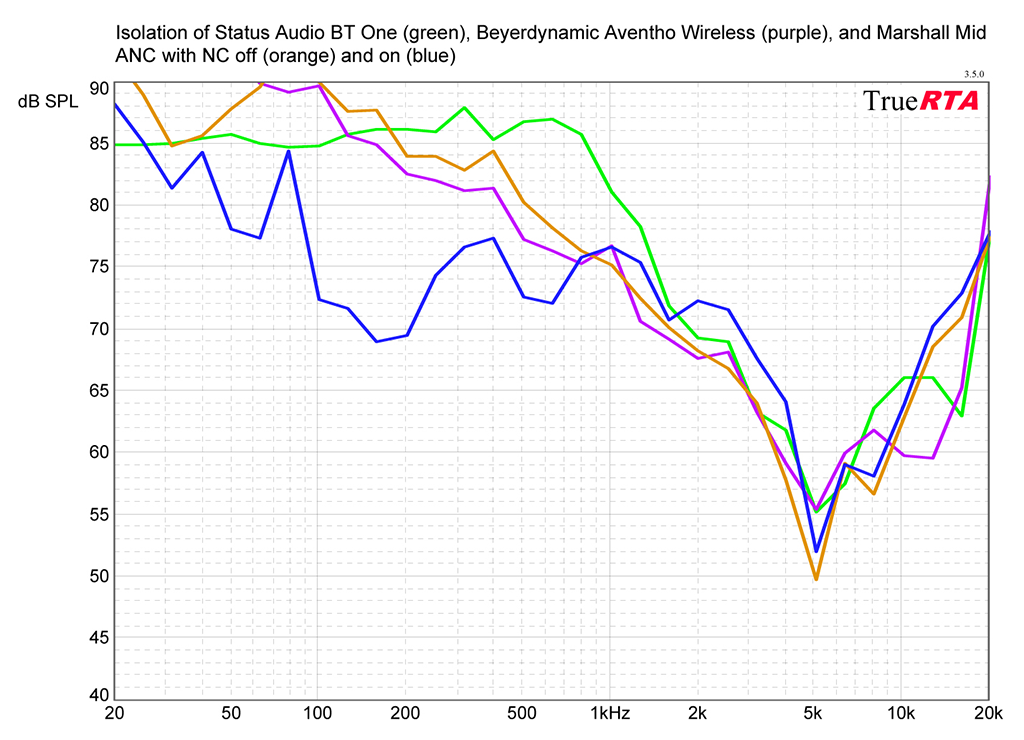 In this chart, the external noise level is 85dB SPL, and numbers below that indicate the degree of attenuation of outside sounds. The BT Ones’ isolation doesn’t quite match that of the other on-ear headphones I included on the chart, but for small, non-noise-canceling headphones, it’s OK. 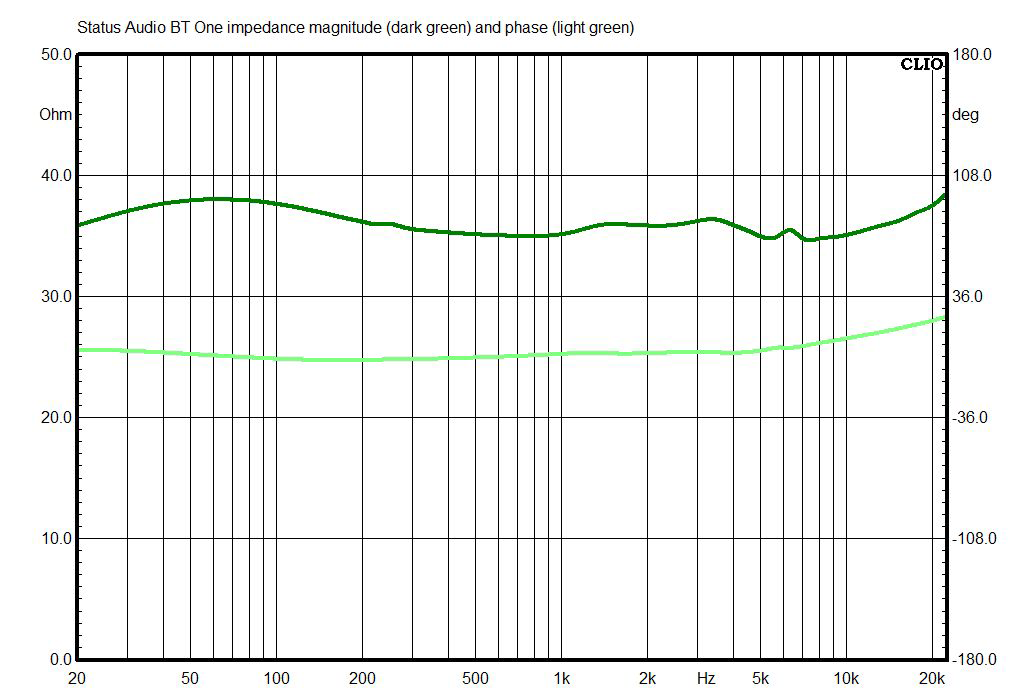 The BT Ones’ impedance response in wired mode is close to flat, averaging 37 ohms and with essentially flat phase response.

Latency of the BT Ones used with the MEE Audio Connect transmitter was 34ms, indicating that they include the aptX Low Latency codec, even though it’s not specifically stated on the BT Ones’ webpage. Thus, you will not experience lip-sync problems using them for video or gaming, provided you use a source device that has aptX LL. Sensitivity of the BT Ones with a wired connection, measured between 300Hz and 3kHz using a 1mW signal calculated for the rated 32-ohms impedance, is 109.0dB, so you are sure to get plenty enough volume when you plug into an airliner’s inflight entertainment system.