I measured the AH-D7200s using laboratory-grade equipment: a G.R.A.S. Model 43AG ear/cheek simulator/RA0402 ear simulator with KB5000/KB5001 simulated pinnae, and a Clio 10 FW audio analyzer. For isolation measurements, I used a laptop computer running TrueRTA software with an M-Audio MobilePre USB audio interface. The headphones were powered using a Musical Fidelity V-CAN and an Audio-gd NFB-1AMP. These are “flat” measurements; no diffuse-field or free-field compensation curve was employed. If you’d like to learn more about what our measurements mean, click here. 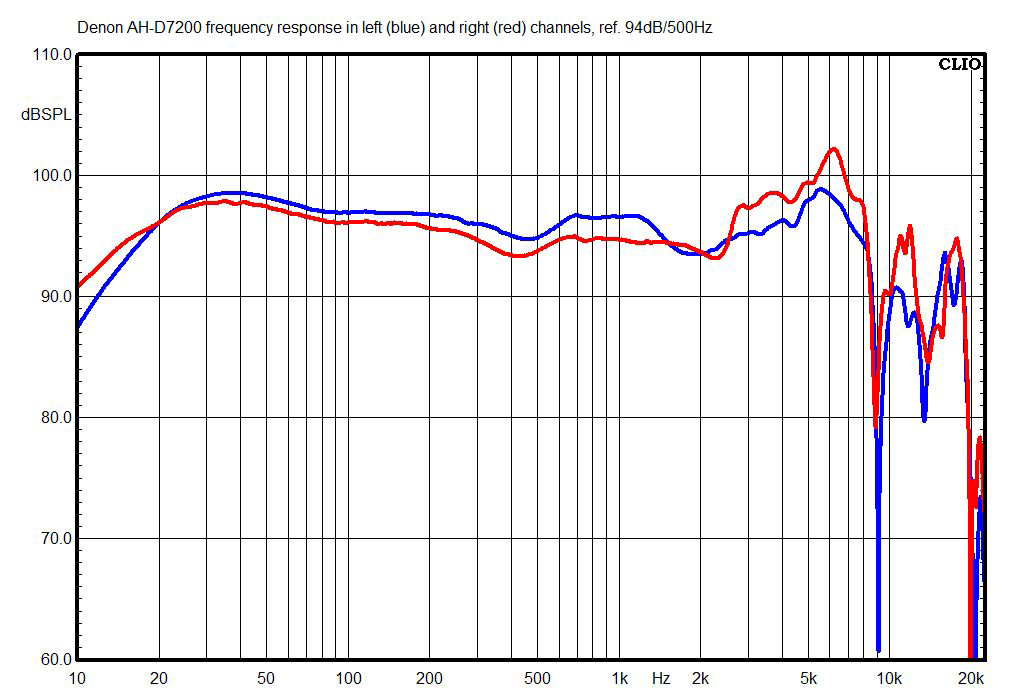 The above chart shows the AH-D7200s’ frequency response. This is unusual in that there’s little or none of the usual peak centered near 3kHz that we see in almost all headphones. This peak is generally considered necessary to create a reasonable simulation of hearing real speakers in a room. Without such a peak, headphones are unlikely to create a natural sense of space, and are likely to sound dull. Note that these measurements are the ones that were most typical (i.e., roughly average) of numerous measurements taken of each channel with the earcups in slightly different positions on the ear/cheek simulator. In the right channel, I was occasionally able to measure a mild peak of a few dB in the 3kHz range, but in most measurements it didn’t show up. I never got it to appear in the left-channel measurements no matter how I positioned the earcups. 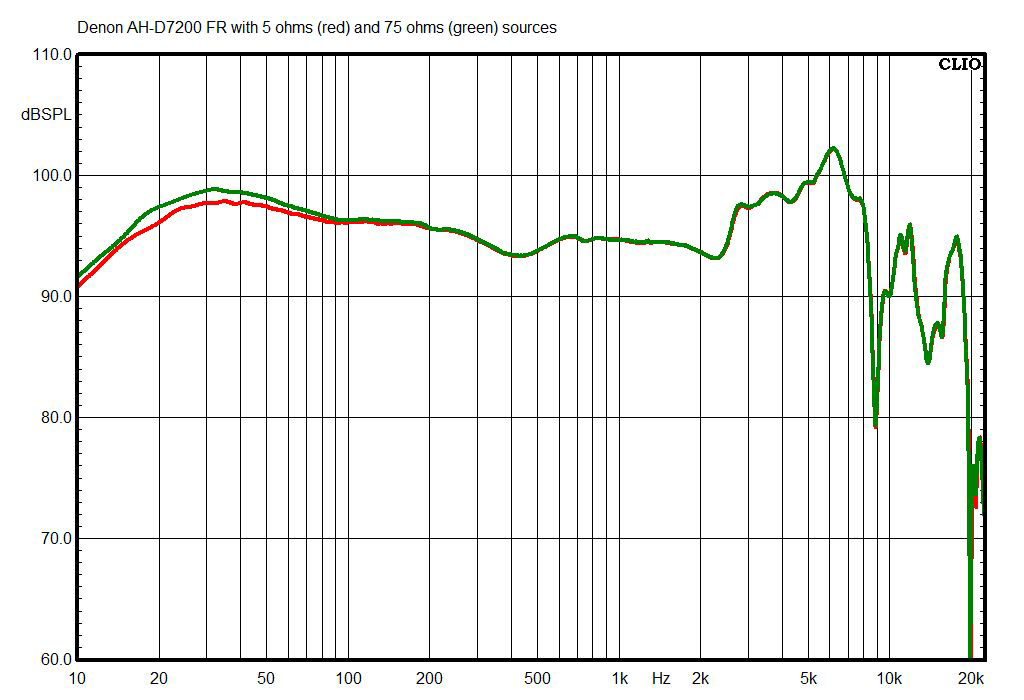 This chart shows how the AH-D7200s’ tonal balance changes when they’re used with a high-impedance (75 ohms) source, such as a cheap laptop or some cheap professional headphone amps. Using the higher-impedance source produces a slight extra kick in the bass -- a boost of about 1dB centered at 30Hz. 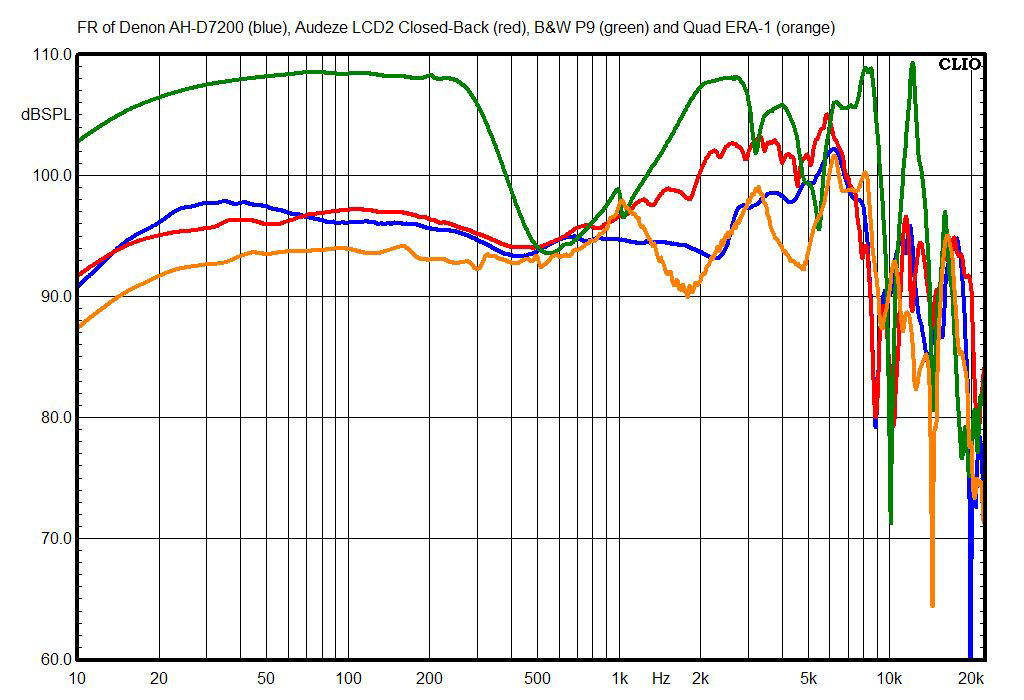 This chart shows the AH-D7200s’ right-channel response compared with two other high-end closed-back headphones (Audeze LCD2 Closed-Backs and Bowers & Wilkins P9s) and the Quad ERA-1s, which I consider a semi-open-back (or semi-closed-back, if you prefer) design. While the AH-D7200s are similar in many ways to the Audeze LCD2 Closed-Backs, they have 4 to 8dB less energy between 1.3 and 4kHz. 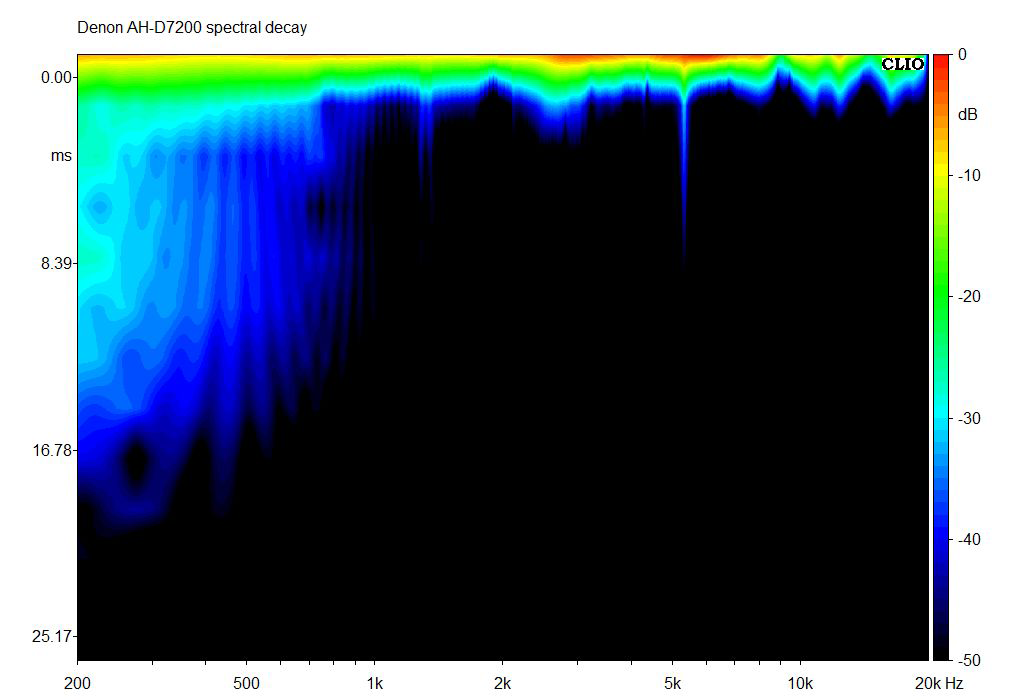 The AH-D7200s’ spectral decay (waterfall) chart shows practically no resonance at all across the entire audioband. There’s one resonance at 5kHz, but considering that it’s extremely narrow, and that it’s down to -40dB within about 2ms, it’s highly unlikely to be audible. 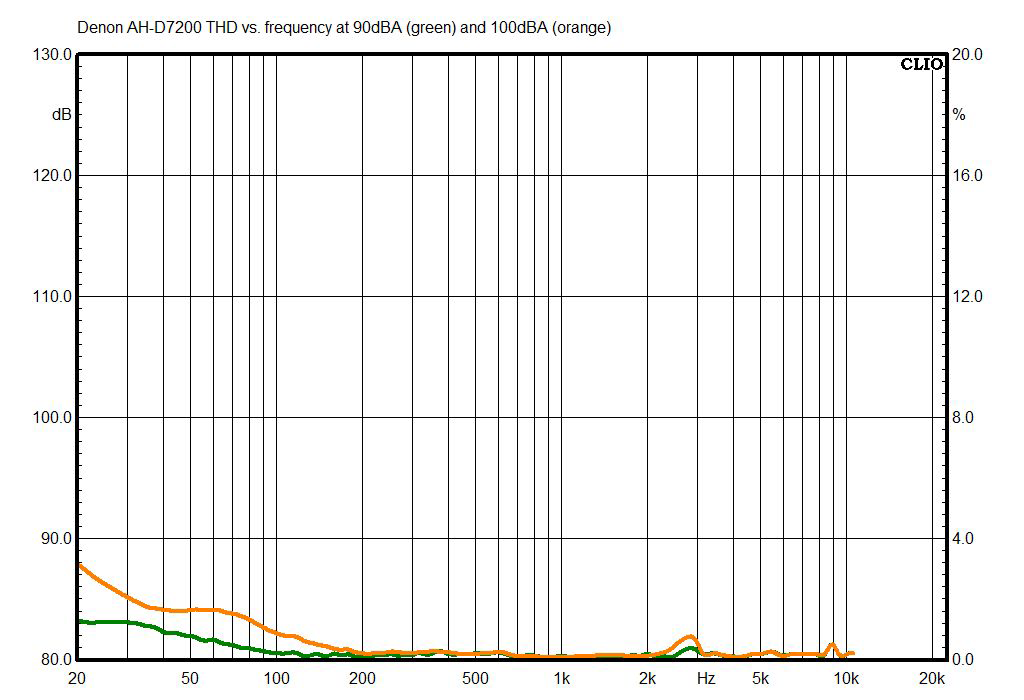 The AH-D7200s’ measured total harmonic distortion (THD) is near zero above 100Hz at the loud listening level of 90dBA, rising to just 3% at 20Hz. Predictably, there’s more at the crazy-loud level of 100dBA -- 2% at 100Hz, rising to 4% at 50Hz and 8% at 20Hz -- but because the distortion is limited to the bass, the distortion harmonics will be low in pitch and probably won’t be troublesome, especially considering that your ears will be begging for mercy at that listening level, anyway. 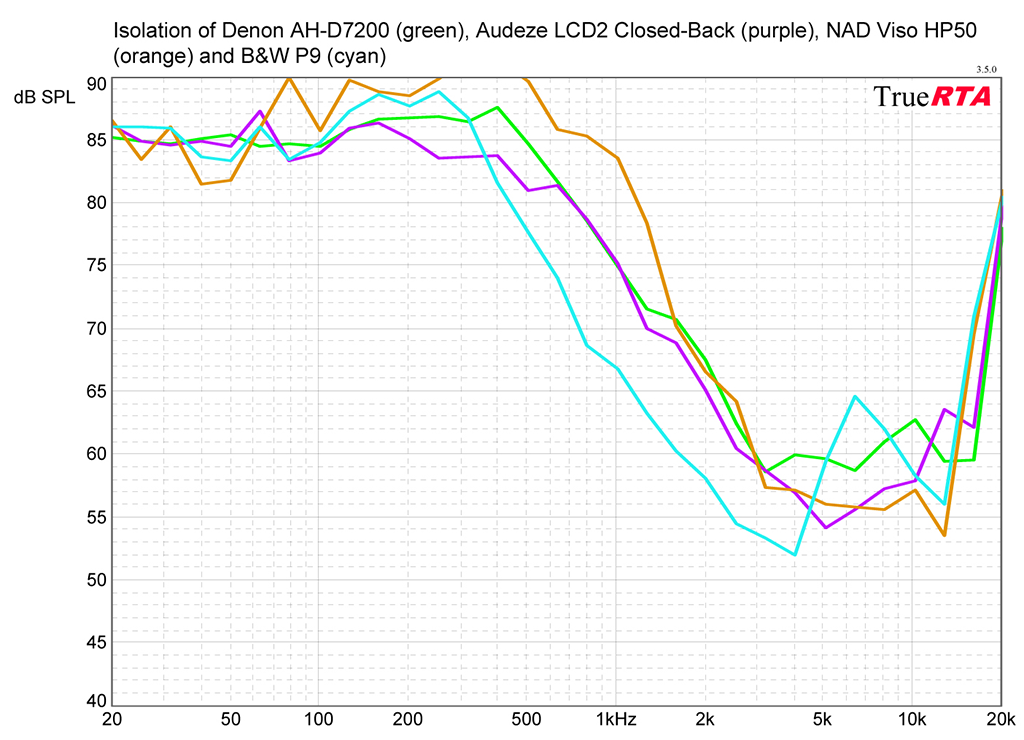 In this chart, the external noise level is 85dB SPL, and numbers below that indicate the degree of attenuation of outside sounds. Isolation of the AH-D7200s is comparable to that of the other closed-back models shown, and adequate to block most office chatter and light background music. 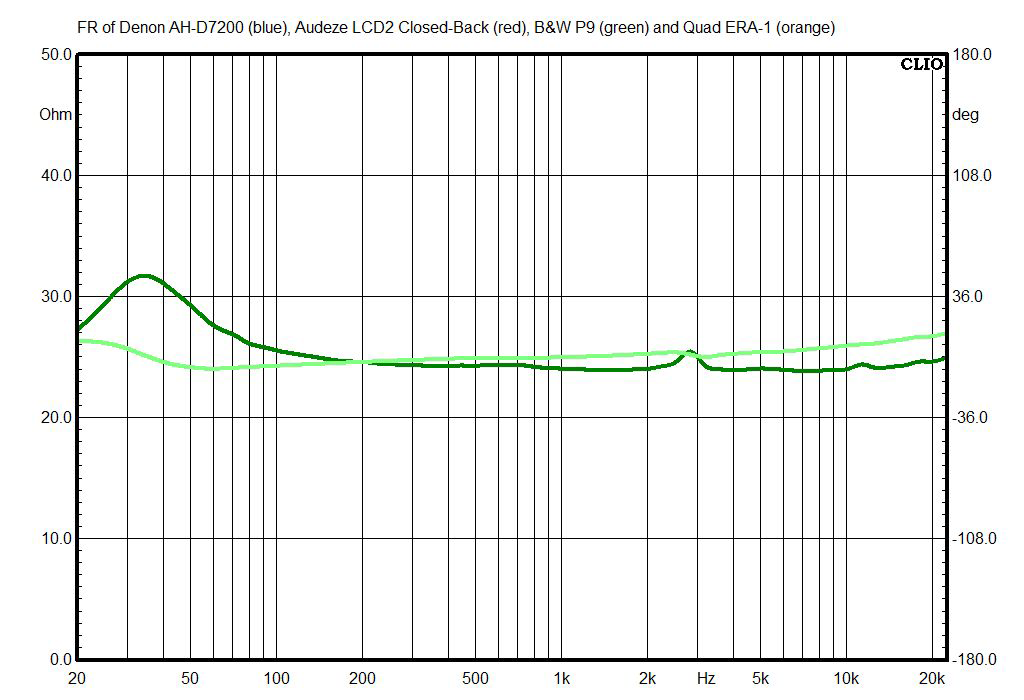 The impedance magnitude of the AH-D7200s is mostly flat at or near the rated 25 ohms, with a small rise to 32 ohms centered at 34Hz. That little rise is why the bass response varies with different source impedances. The impedance phase is very close to flat.

Sensitivity of the AH-D7200s, measured between 300Hz and 3kHz, using a 1mW signal calculated for 25 ohms rated impedance, is 99.7dB. That’s about 5dB below the rated sensitivity, but still sensitive enough that you can get plenty of volume when plugging the AH-D7200s straight into a smartphone or tablet.