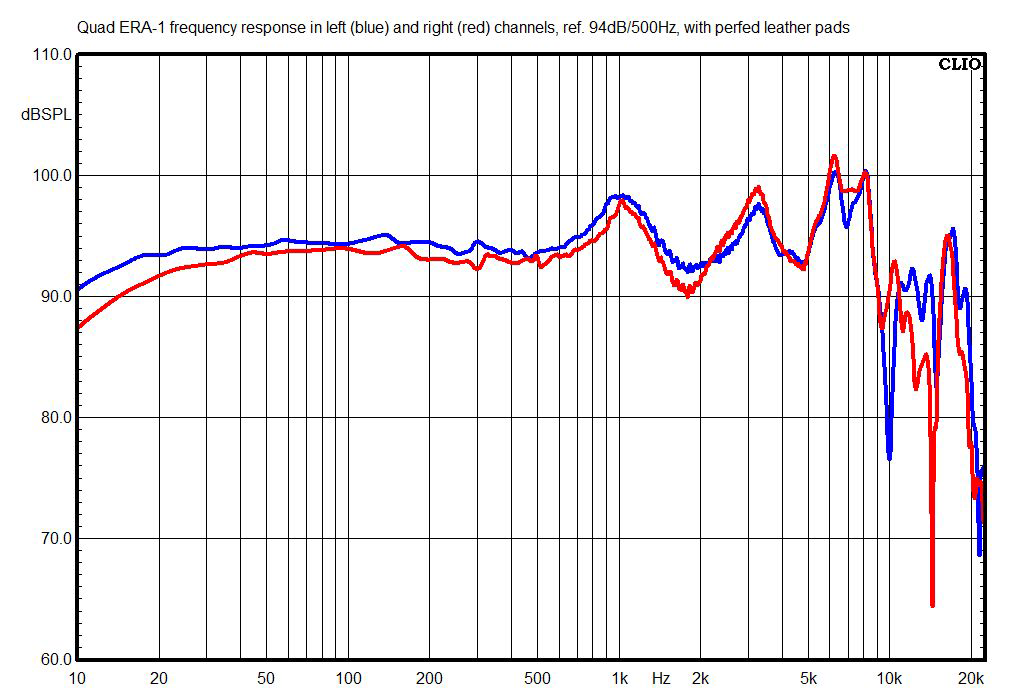 The above chart shows the ERA-1s’ frequency response with the perfed leather pads. What’s unusual here is the small peak centered at 1kHz, and the fact that the peak at 3kHz is lower in magnitude than usual; typically, the peaks in a headphone’s response between 5 and 10kHz are a few dB lower than the 3kHz peak. 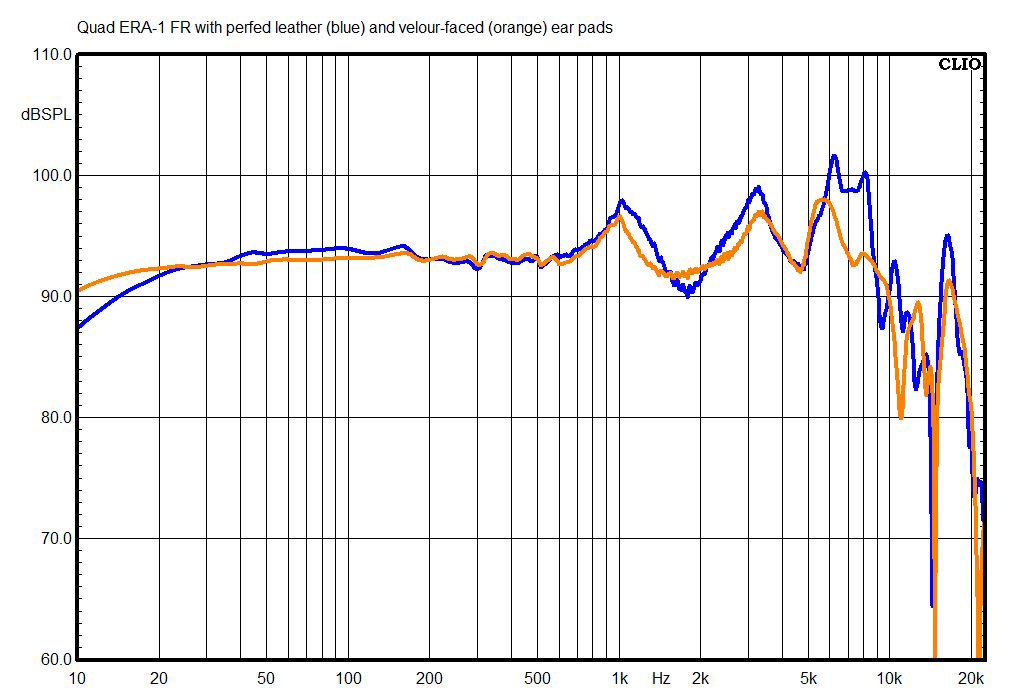 This chart shows the acoustical effects of the perfed leather and velour pads. The velour pads should deliver a softer treble and a fuller tonal balance, at the likely expense of perceived treble detail and spaciousness. 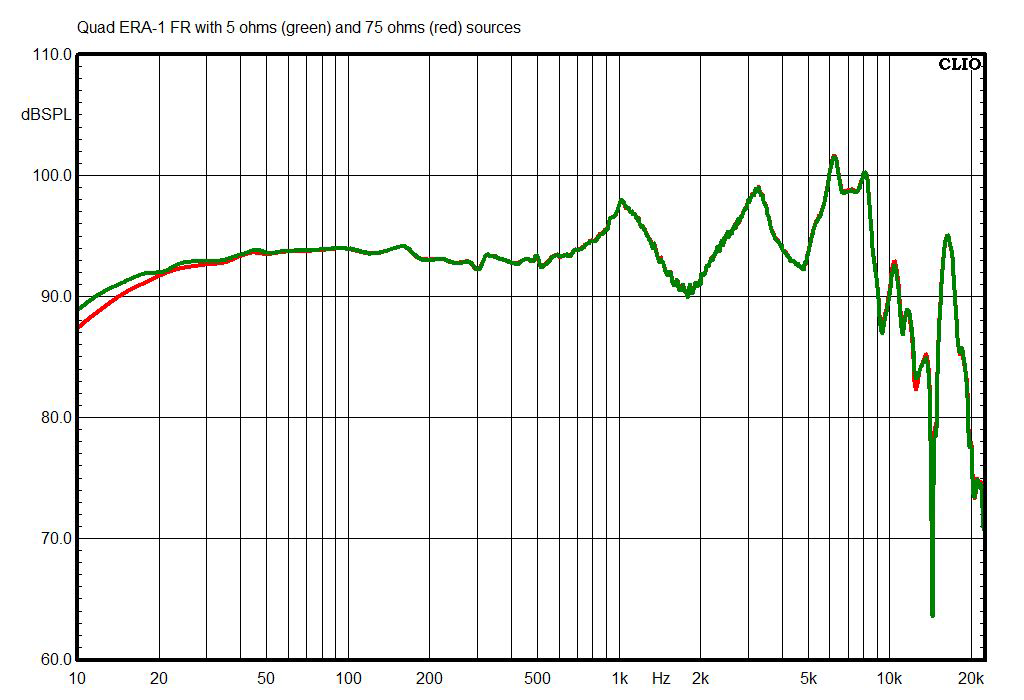 This chart shows how the ERA-1s’ tonal balance changes when they’re used with a high-impedance source, such as a cheap laptop or some cheap professional headphone amps. With the high-impedance source, there’s just a barely measurable (and not audible) reduction in bass of a fraction of a decibel from 20 to 30Hz. 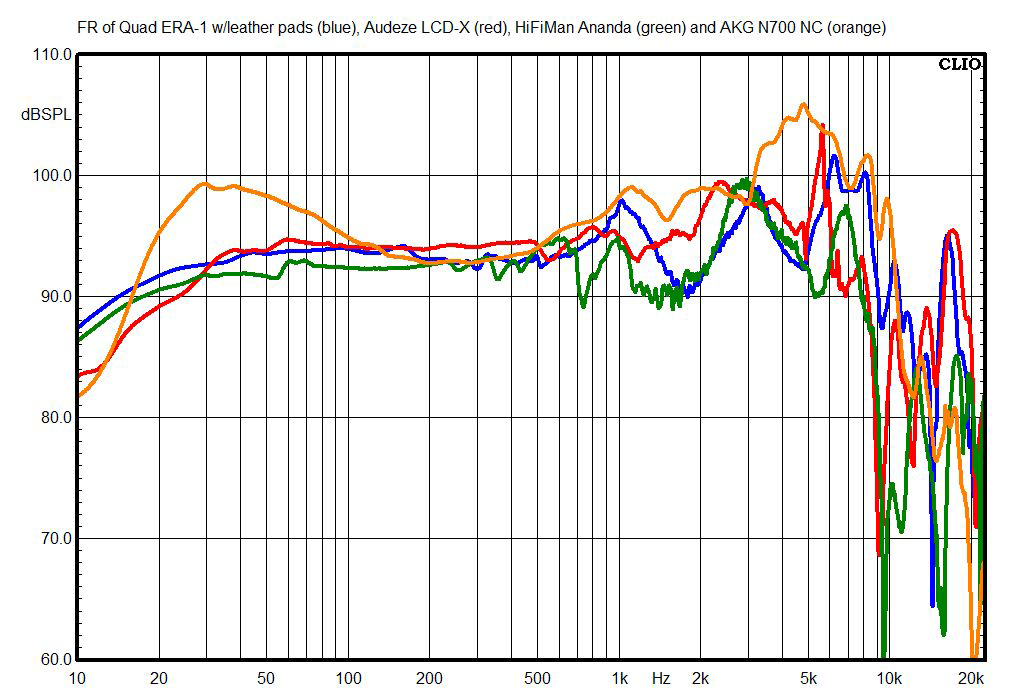 This chart shows the ERA-1s’ right-channel response compared with two other open-back planar-magnetic models (the HiFiMan Anandas and the Audeze LCD-Xes), as well as the AKG N700NCs, a closed-back model said to deliver response very close to the “Harman curve,” shown in research by Harman International to be the preferred over-ear headphone response for most listeners. The ERA-1s are generally similar to the other planar magnetics. 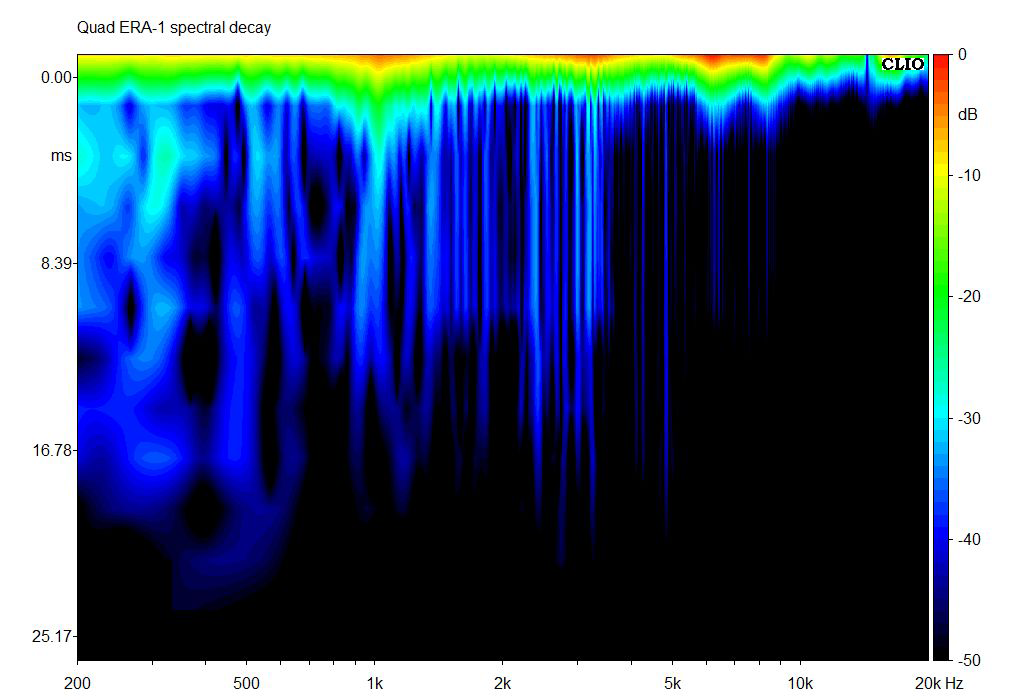 The midrange hash (very narrow, high-Q resonances) shown in the ERA-1s’ spectral decay (waterfall) chart is typical of planar-magnetic headphones, although the ERA-1s’ hash covers a wider band than most. 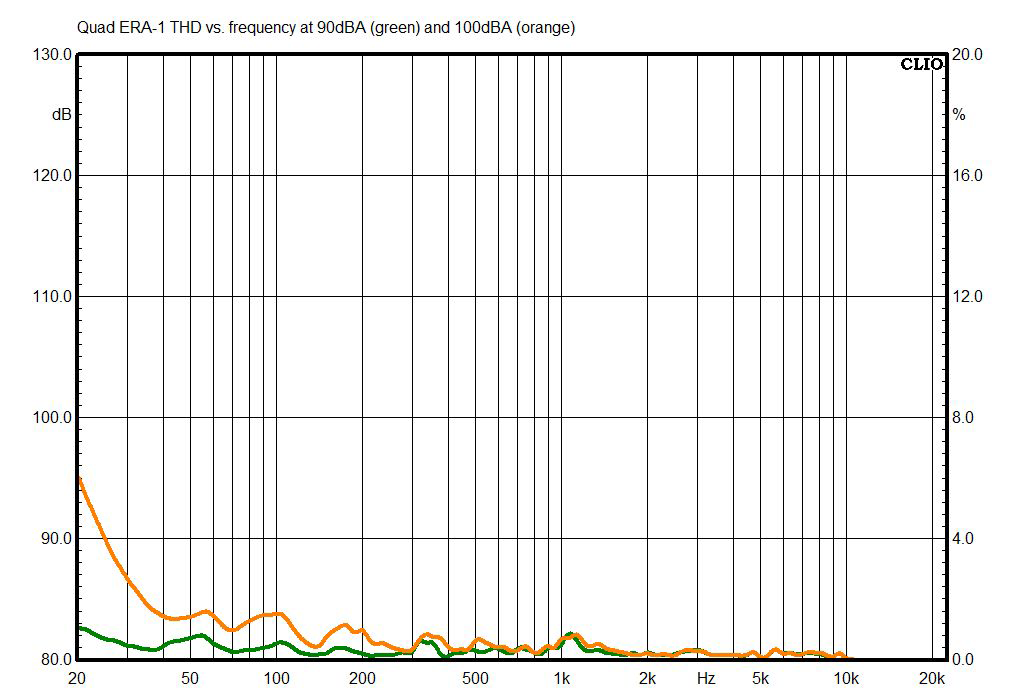 The ERA-1s’ measured total harmonic distortion (THD) is generally low, although actually slightly higher than I typically measure from planar-magnetic headphones. It reaches an audible level only in the bottom octave of bass (20-40Hz), and at an extremely loud level, but most music has little or no content in that range, and most of the distortion harmonics are so low in pitch that they’ll be hard to hear. 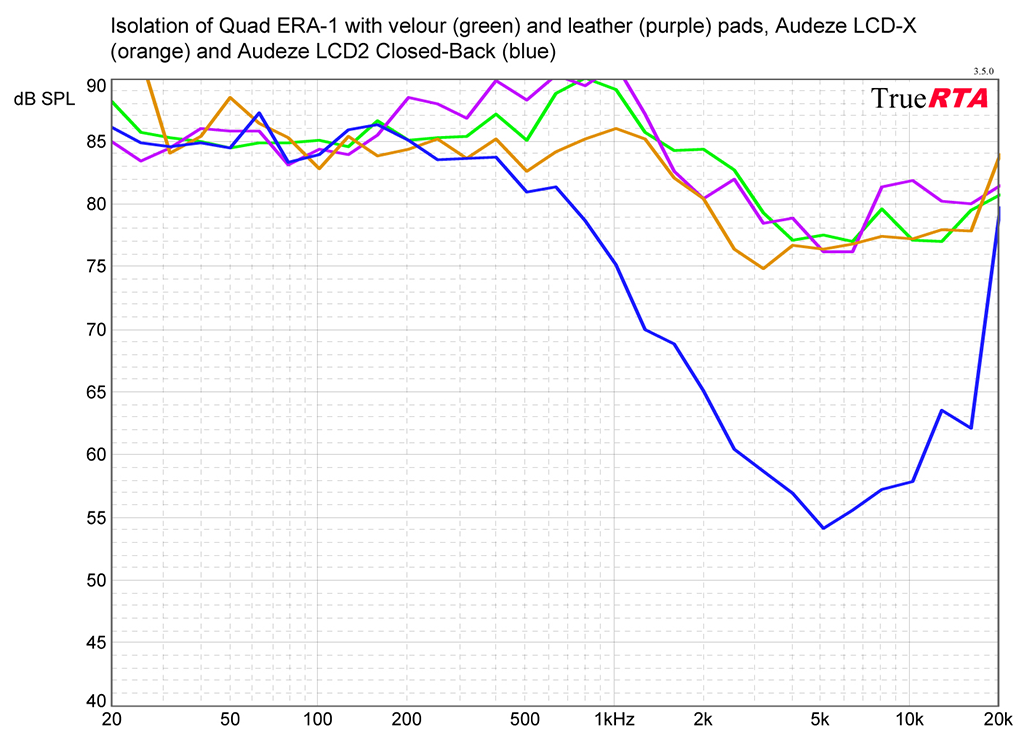 In this chart, the external noise level is 85dB SPL, and numbers below that indicate the degree of attenuation of outside sounds. Like almost all open-back models, the ERA-1s offer little isolation from outside sounds -- much less than that of the Audeze LCD2 Closed-Backs also shown here. 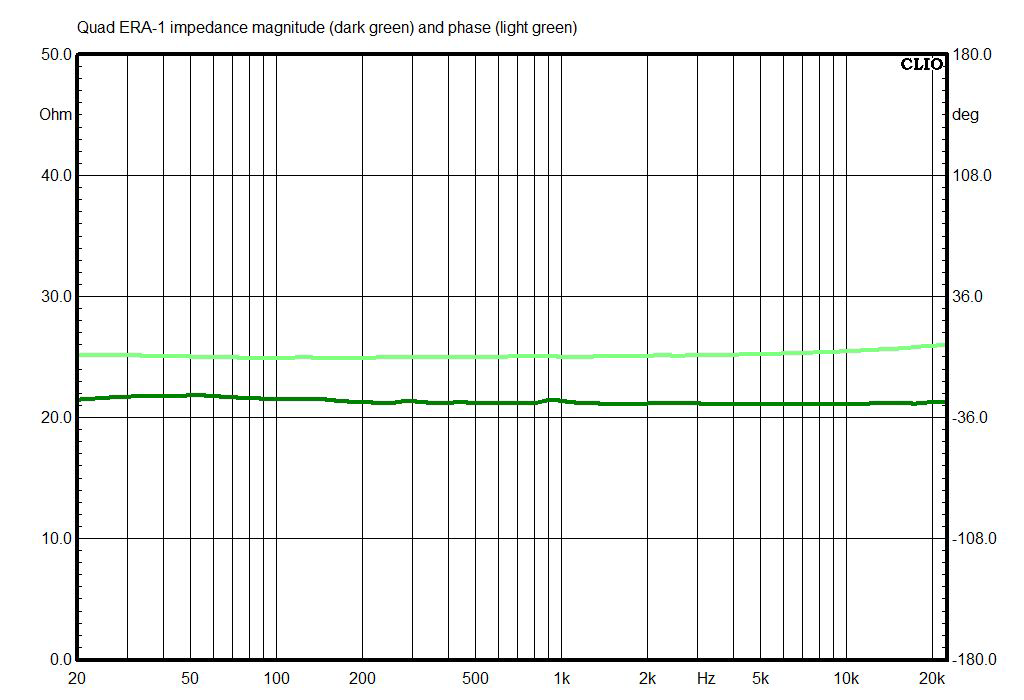 As usual with planar-magnetic headphones, the ERA-1s have an almost perfectly flat impedance curve, running about 21 ohms through the entire audio range, and impedance phase is similarly flat.

Sensitivity of the ERA-1s, measured between 300Hz and 3kHz, using a 1mW signal calculated for 20 ohms rated impedance, is 93.4dB with the perfed leather pads and 96.1dB with the velour pads. This means that while you will likely get usable volume if you plug the ERA-1s straight into a smartphone, you’ll get the best performance from the ERA-1s if you use a high-quality portable music player or amplifier.