I measured the AR-E010s using a G.R.A.S. Model 43AG ear/cheek simulator/RA0402 ear simulator, a Clio 10 FW audio analyzer, a laptop computer running TrueRTA software with an M-Audio MobilePre USB audio interface, and a Musical Fidelity V-CAN amp. On the Model 43AG, I used the new KB5000 and KB5001 anthropomorphic simulated pinnae for most measurements, and the stainless-steel coupler included with the RA0045 for certain other measurements as noted. For measurements in Bluetooth mode, I used a Sony HWS-BTA2W Bluetooth transmitter to get the signal to the earphones. These are “flat” measurements; no diffuse-field or free-field compensation curve was employed. 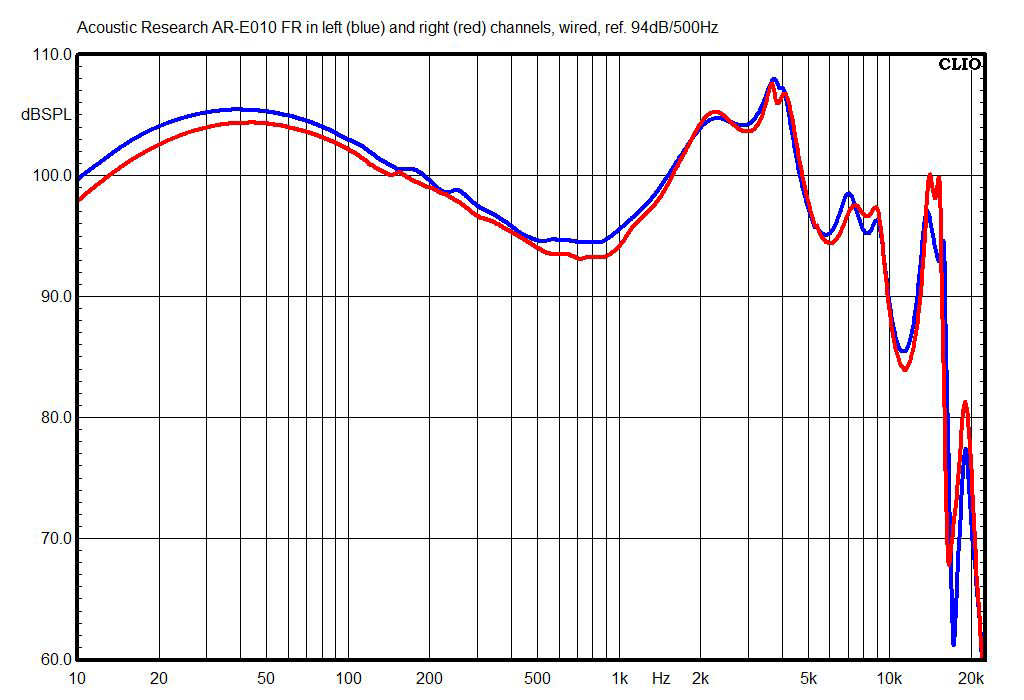 The above chart shows the AR-E010s’ frequency response measured with the new KB5000 and KB5001 anthropomorphic simulated pinnae. This is within the bounds of what I typically measure with good-sounding earphones, with just a little more bass and treble output than average. 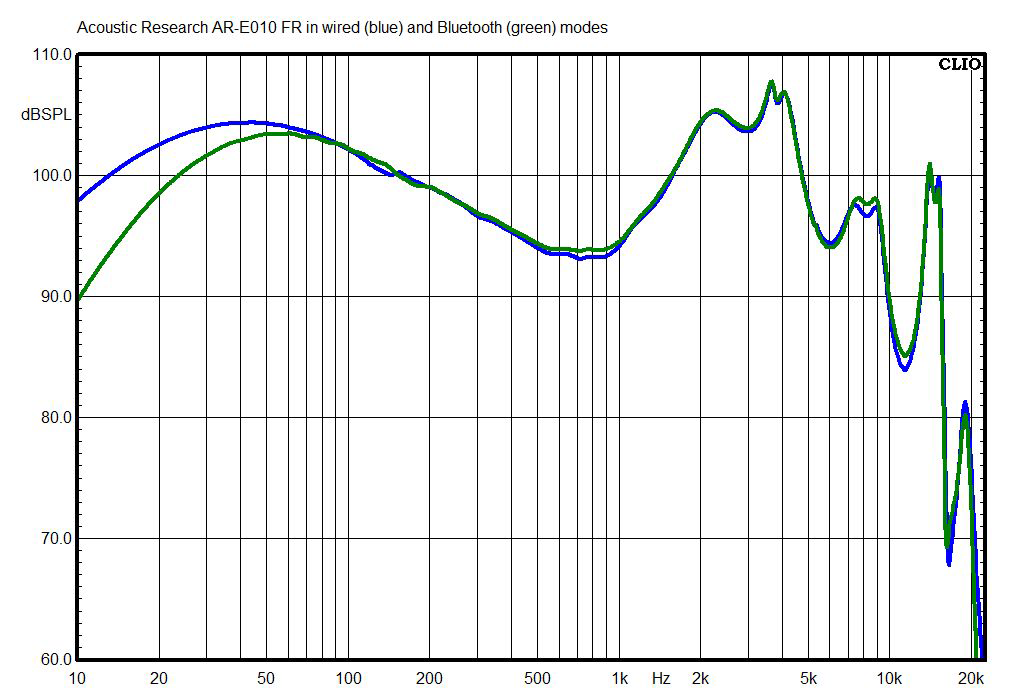 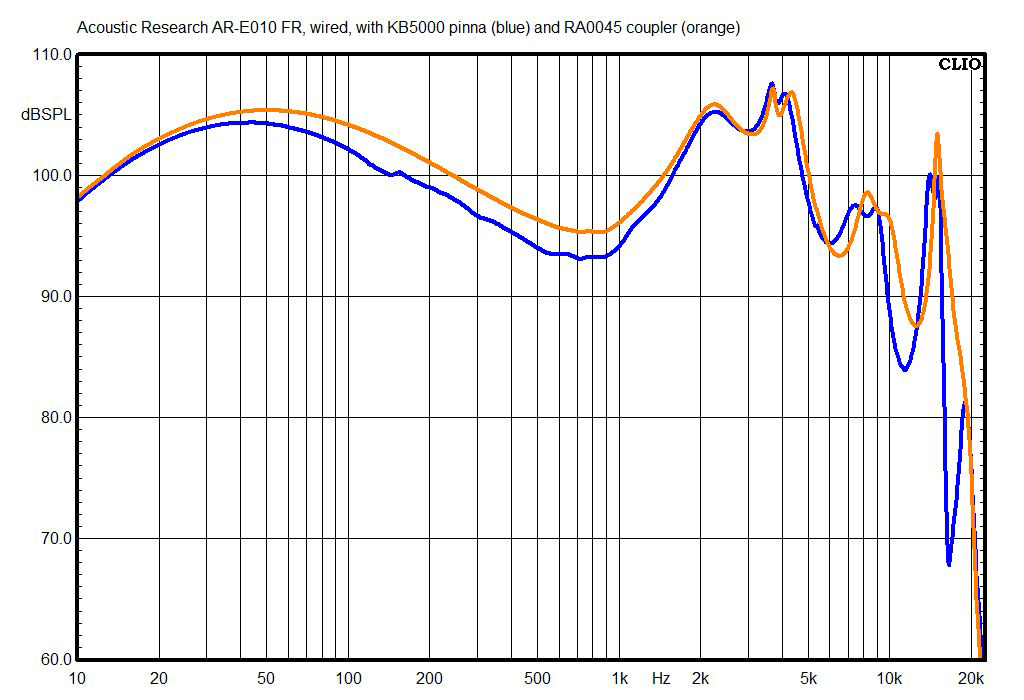 This chart shows the AR-E010s’ right-channel frequency response measured with the RA0045 ear simulator’s stainless-steel coupler (which I’ve used for years) and the new KB5000 simulated pinna, which I recently switched to because it more accurately reflects the structure and pliability of the human ear and provides a more realistic simulacrum of what you’ll actually experience with headphones or earphones. This is just for sake of comparison with older measurements of mine. 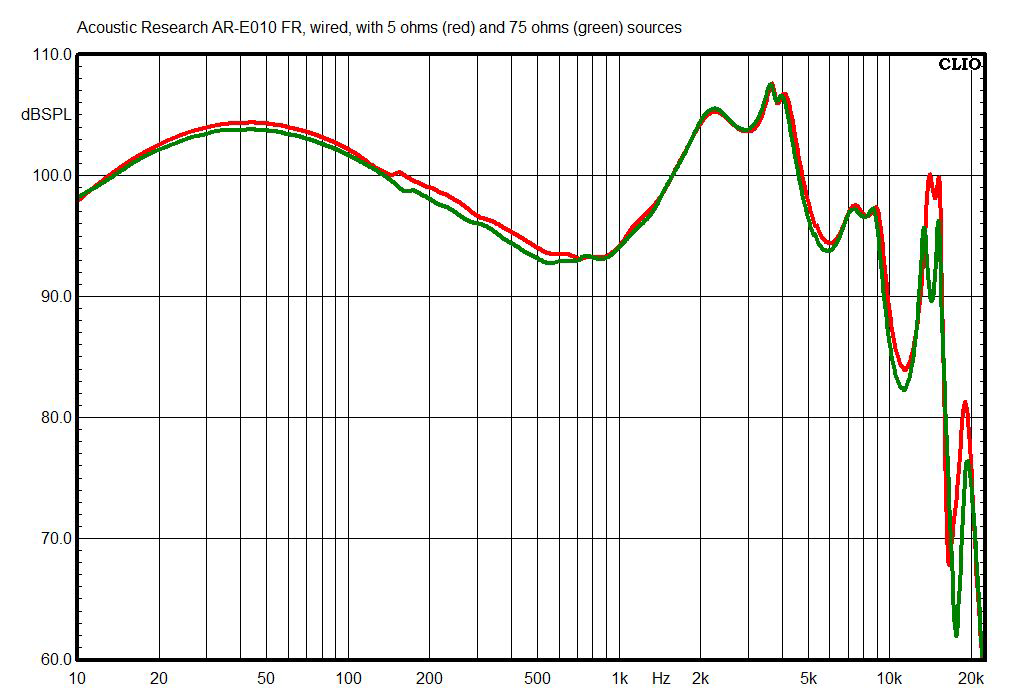 Here you can see how the AR-E010s’ tonal balance changes when they’re used with a high-impedance source, such as a cheap laptop or some cheap professional headphone amps. For hybrid earphones, this is an extremely impressive result -- the sound barely changes with the source impedance. Most earphones using balanced armatures show a big difference on this test. 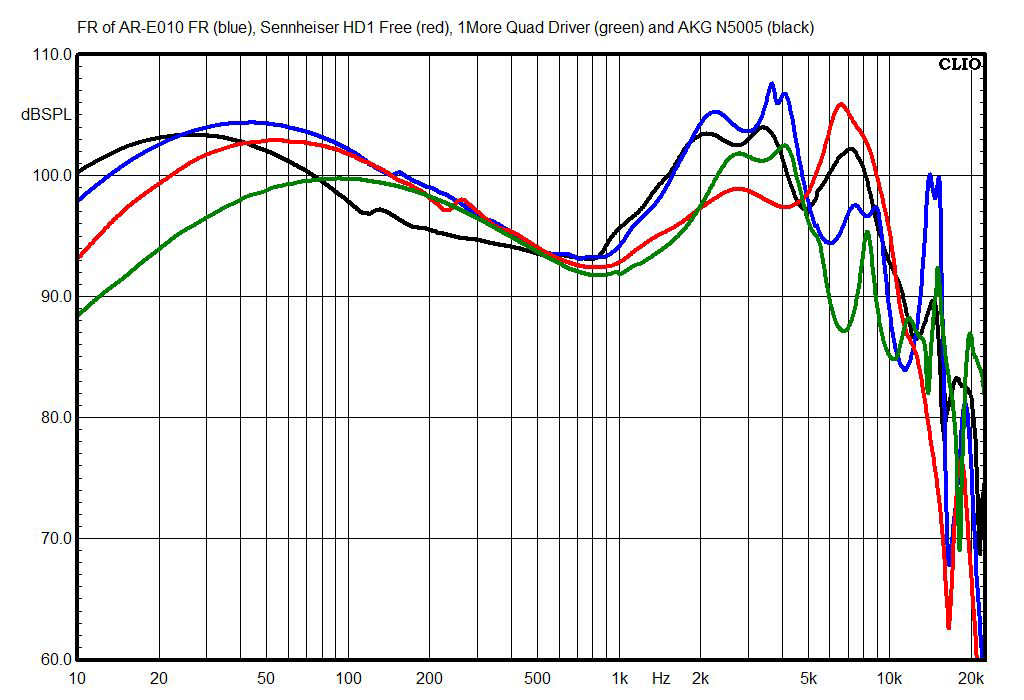 This chart shows the AR-E010s’ right-channel response compared with a few other midpriced earphones: the Sennheiser HD 1 Free Bluetooth earphones, the 1More Quad Drivers, and the AKG N5005s, the earphones that currently best conform to the “Harman curve,” shown in research by Harman International to be the preferred in-ear headphone response for most listeners. The AR-E010s do seem to have a couple dB of extra treble and bass. I suspect that the little extra oomph in the bass centered at 45Hz is what made us think the midbass sounded a bit muted. 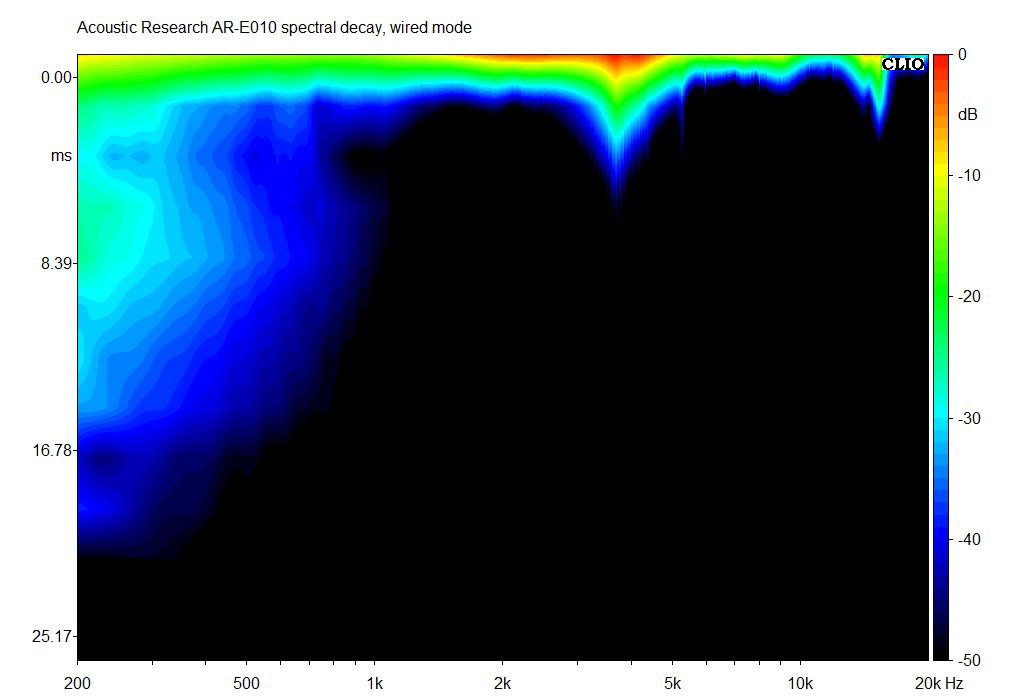 The AR-E010s’ spectral decay (waterfall) chart shows significant resonance only at about 3.6kHz, which corresponds with the earphones’ response peak, but it lasts only about 3ms. 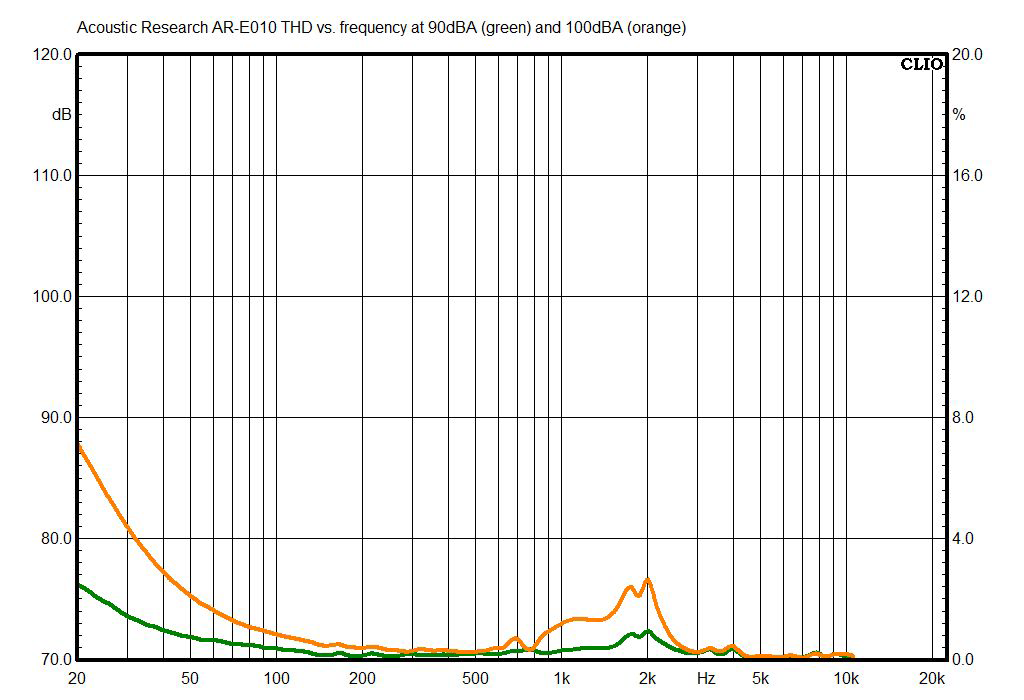 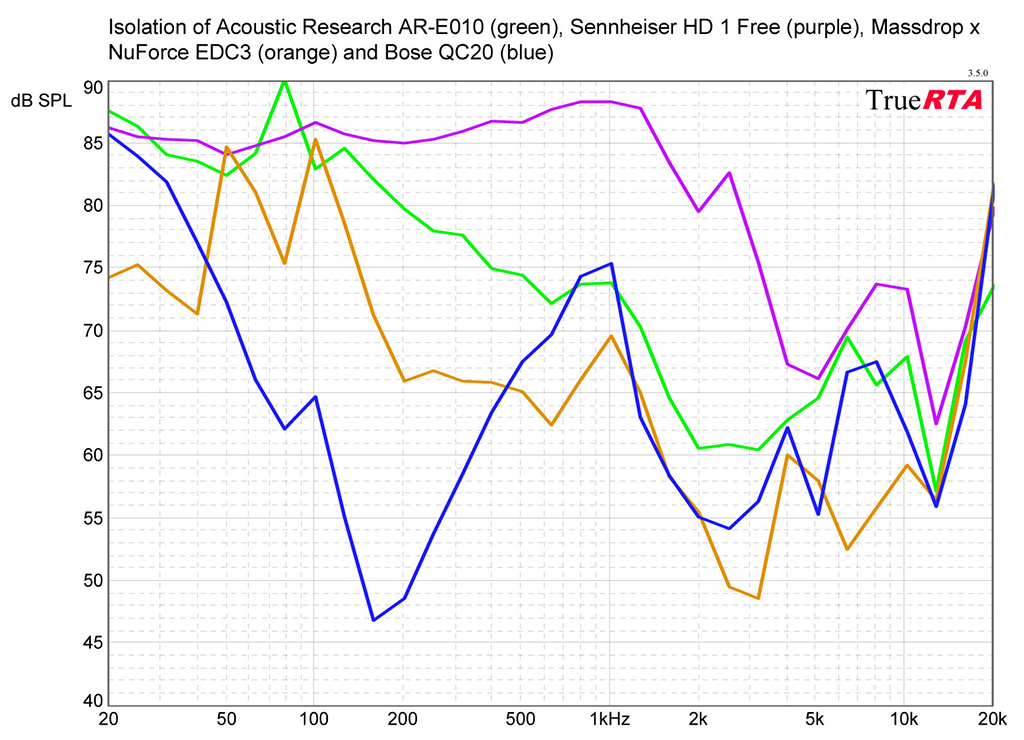 In this chart, the external noise level is 85dB SPL, and numbers below that indicate the degree of attenuation of outside sounds. The AR-E010s’ isolation is better than average for non-noise-canceling earphones, although not as good as I measured from the Massdrop x NuForce EDC3 earphones, which have smaller earpieces that fit more snugly into the ears. 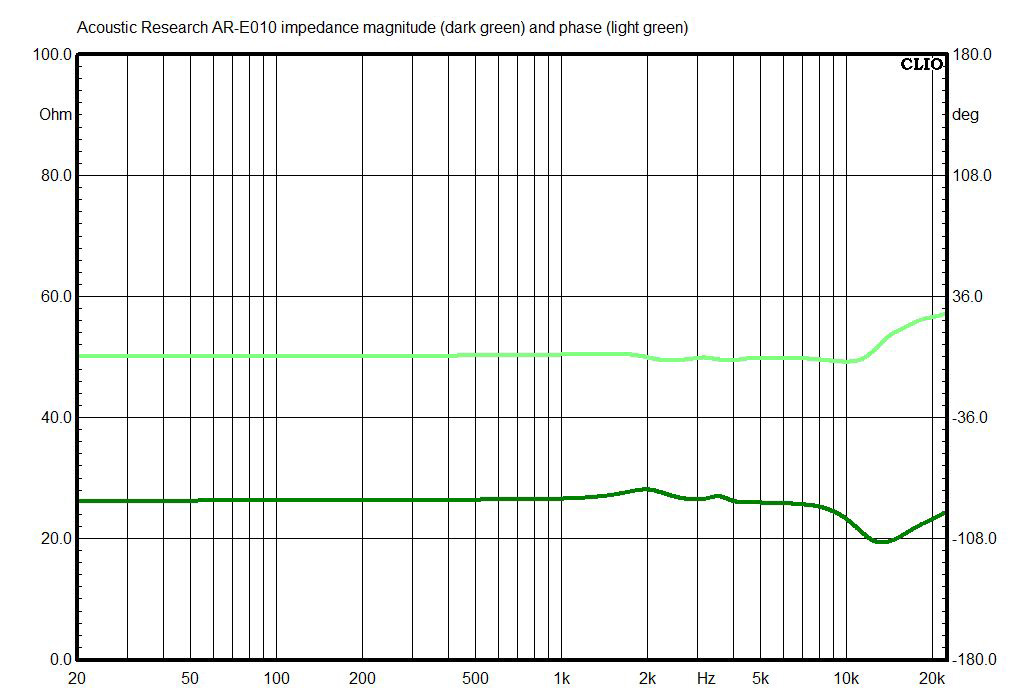 The AR-E010s’ impedance response is essentially flat at 26 ohms, with just a little wiggle above 6kHz. This is extremely impressive for a hybrid earphone; most earphones with balanced armatures show large impedance swings in the treble.

Sensitivity of the AR-E010s, measured between 300Hz and 3kHz using a 1mW signal calculated for 26 ohms impedance (my impedance measurement -- the rated impedance is not listed on the website or in the manual), is 110.4dB, adequate to achieve very loud volumes from any source device.