I measured the Fidue Virgos using a G.R.A.S. Model 43AG ear/cheek simulator (including the RA0402 high-resolution ear simulator), a Clio 10 FW audio analyzer, a laptop computer running TrueRTA software with an M-Audio MobilePre USB audio interface, and a Musical Fidelity V-CAN headphone amplifier. I used the RA0402 as a direct coupler for most measurements, adding the Model 43AG plus the G.R.A.S. KB5000 simulated pinna for certain measurements, as noted. I used the included medium-size silicone tips for measurements with the coupler, and the Comply foam tips for measurements with the ear/cheek simulator. These are “flat” measurements; no diffuse-field or free-field compensation curve was employed. 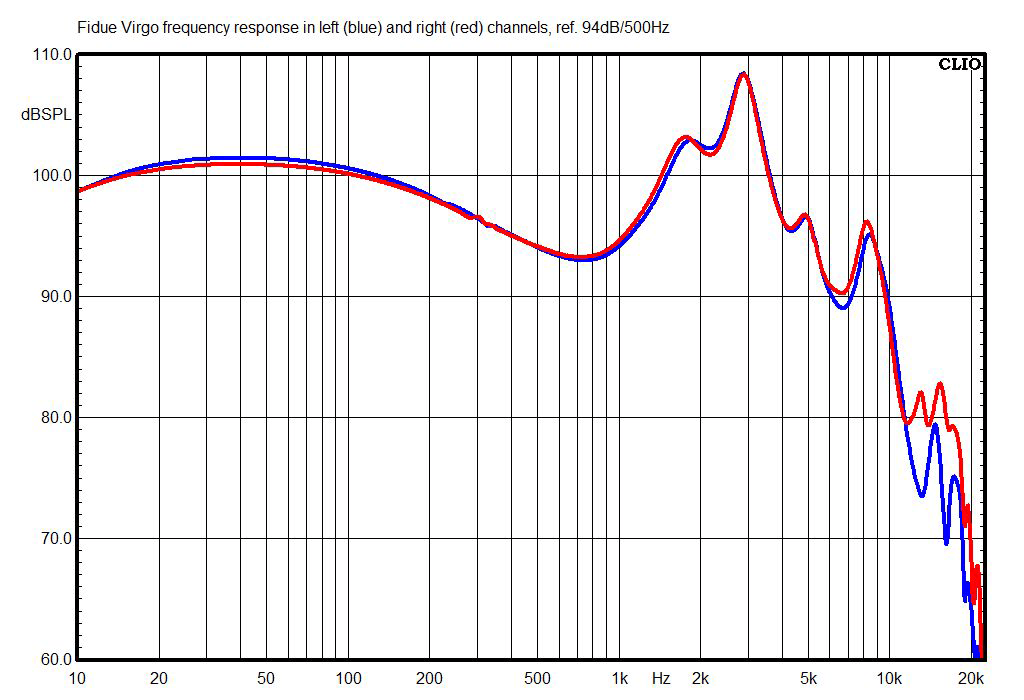 The most prominent feature of the Virgos’ frequency response is that their peak in the 3kHz region -- generally considered to mimic ear-canal resonance and to let earphones deliver a decent simulation of hearing speakers in a room -- is higher in magnitude than usual. This suggests that they’ll sound a little bright. However, the energy above 4kHz is a bit lower than average, which suggests that they might not have as airy or ambient a sound as some competitors. 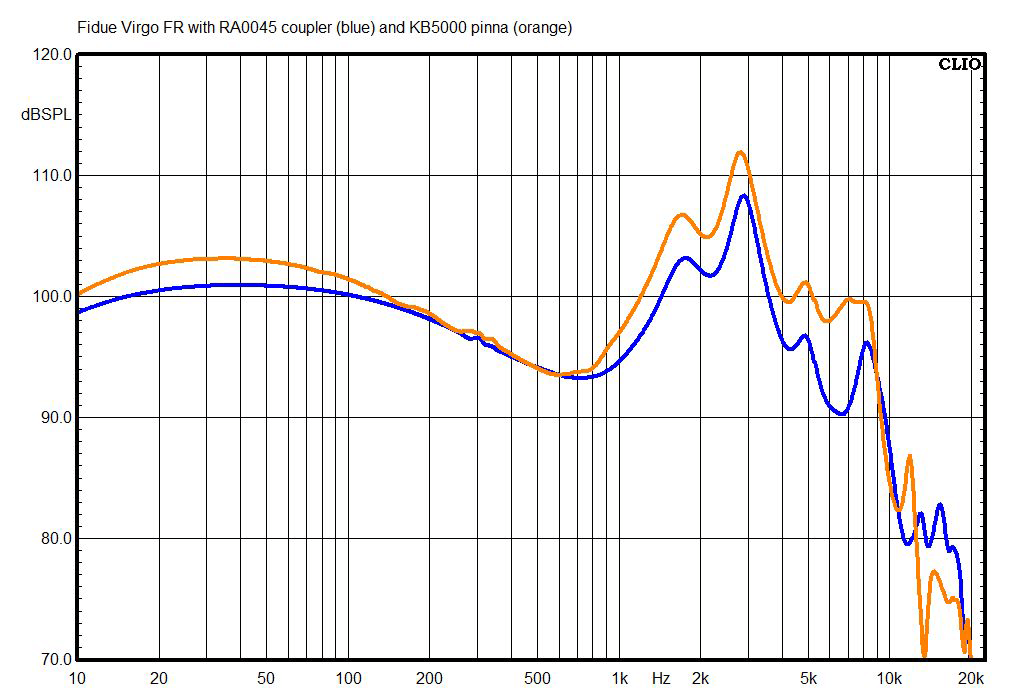 This chart shows the Virgos’ right-channel frequency response measured using only the RA0402 coupler (which has a stainless-steel tube into which earphones fit), and measured using the Model 43AG ear/cheek simulator with G.R.A.S.’s new KB5000 pinna, which I’ll be switching to eventually for my earphone measurements because it’s a more realistic representation of the acoustical environment presented by the human ear. (I include this for future reference; I intend to show both measurements until I begin using only the new pinna.) 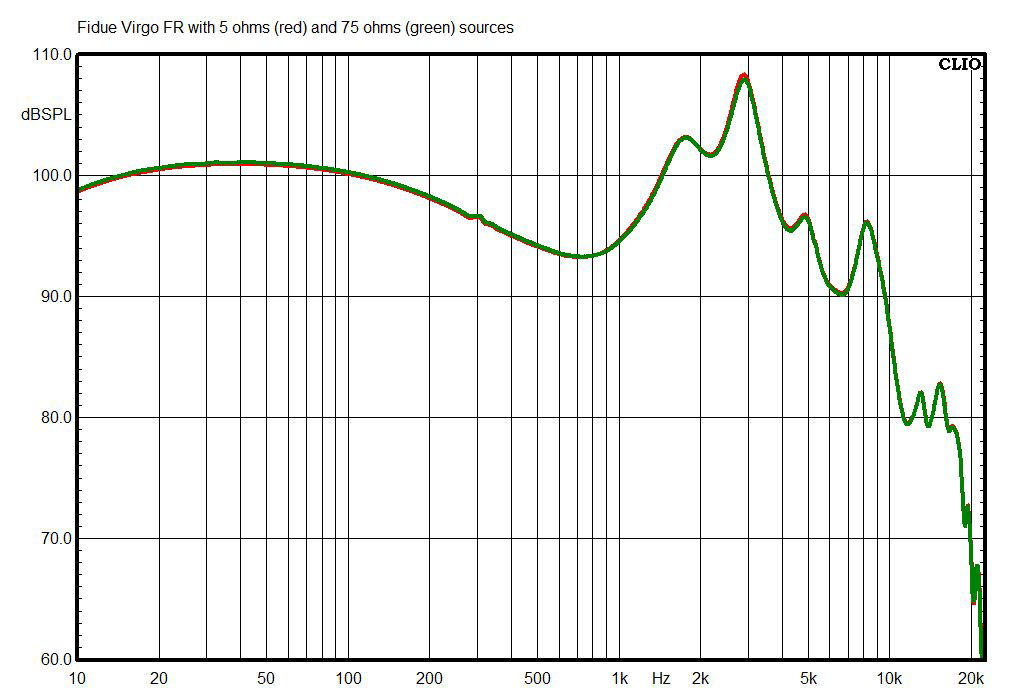 This chart shows the result of adding 70 ohms of output impedance to the V-CAN’s 5 ohms, to simulate the effects of using a typical low-quality headphone amp. Most earphones having one or more balanced-armature drivers per earpiece show a substantial measured difference with this change, but the Virgos show almost none. This suggests that the Virgos will have the same tonal balance no matter what source device or amp you use them with. 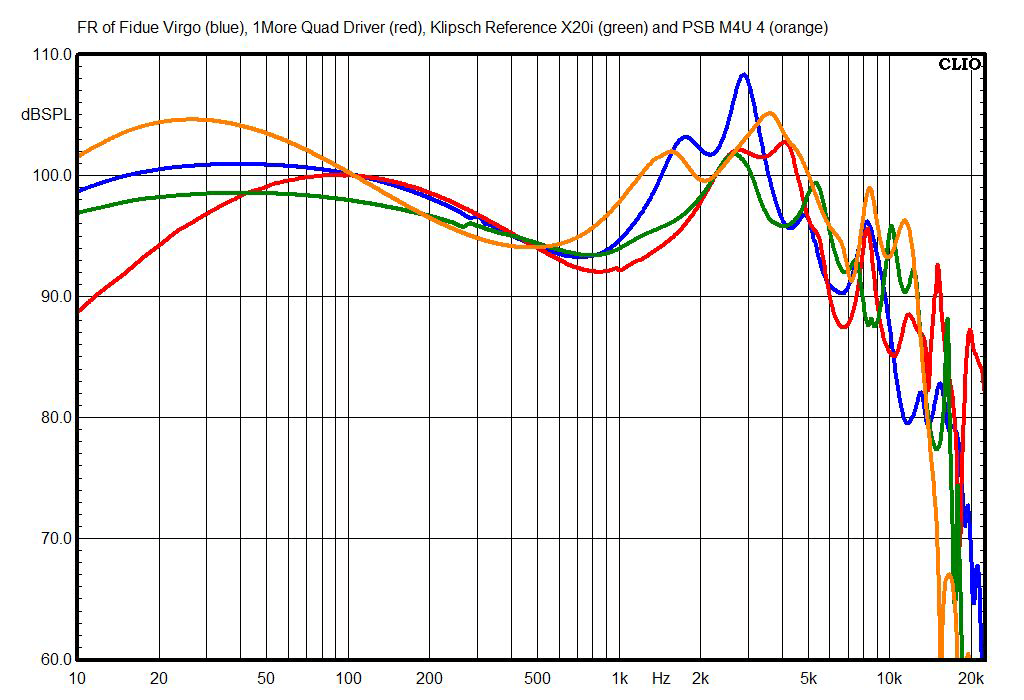 This comparison chart shows that the Virgos’ 3kHz peak is relatively strong; in the competitors, the 3kHz peak is somewhere around the level of the peak in the bass response. 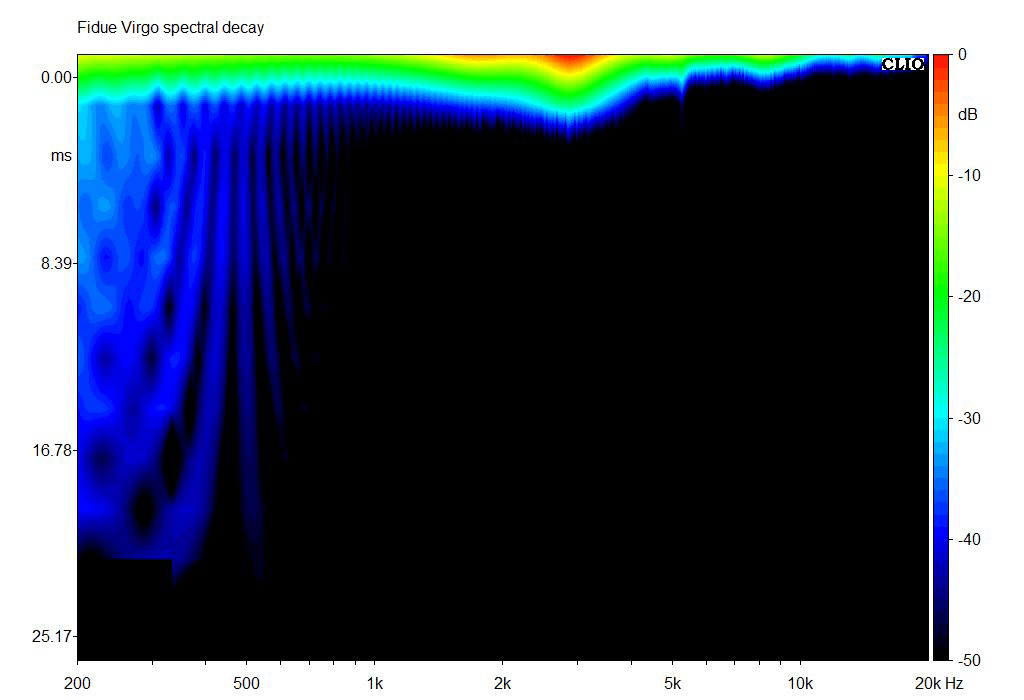 The spectral-decay (waterfall) chart looks clean, with some strong but very-well-damped (i.e., non-ringing) resonance corresponding to that strong 3kHz peak. 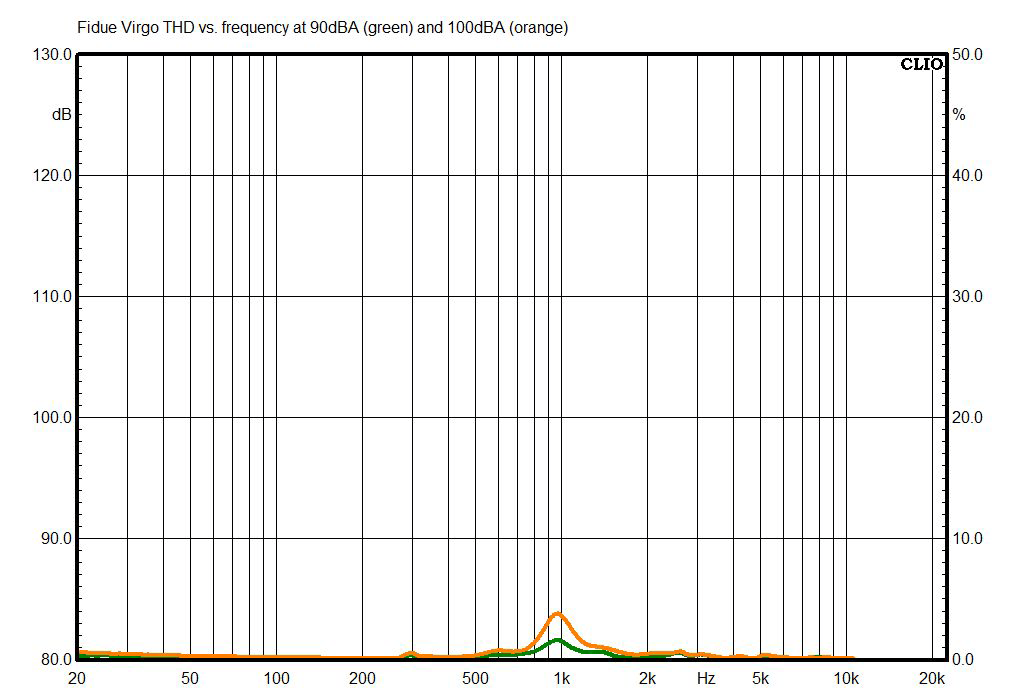 The Virgos’ total harmonic distortion (THD) is low, nearly zero, except for a relatively low-magnitude, high-Q peak near 1kHz. Even at the extremely loud listening level of 100dBA, the peak is narrow and weak enough that it’s very unlikely to be audible. 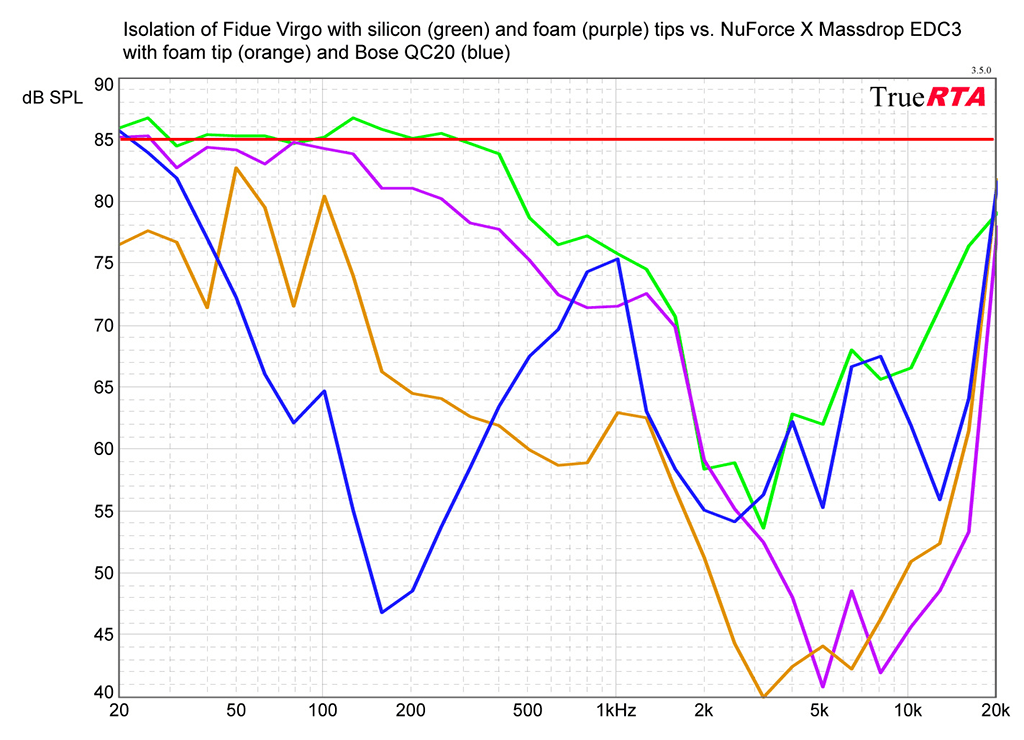 In this chart, the external noise level is 85dB SPL; the numbers below that indicate the degree of attenuation of outside sounds. I included measurements with the silicone eartips and the Comply foam tips because with the Virgos, the choice of tip makes a significant difference. This level of isolation is not as good as I’ve seen from some other earphones with over-ear cable routing, such as the Massdrop x NuForce EDC3; I’d guess that’s because they’re relatively large and don’t nestle as tightly into the ear/cheek simulator’s fake pinna. Your mileage may vary. 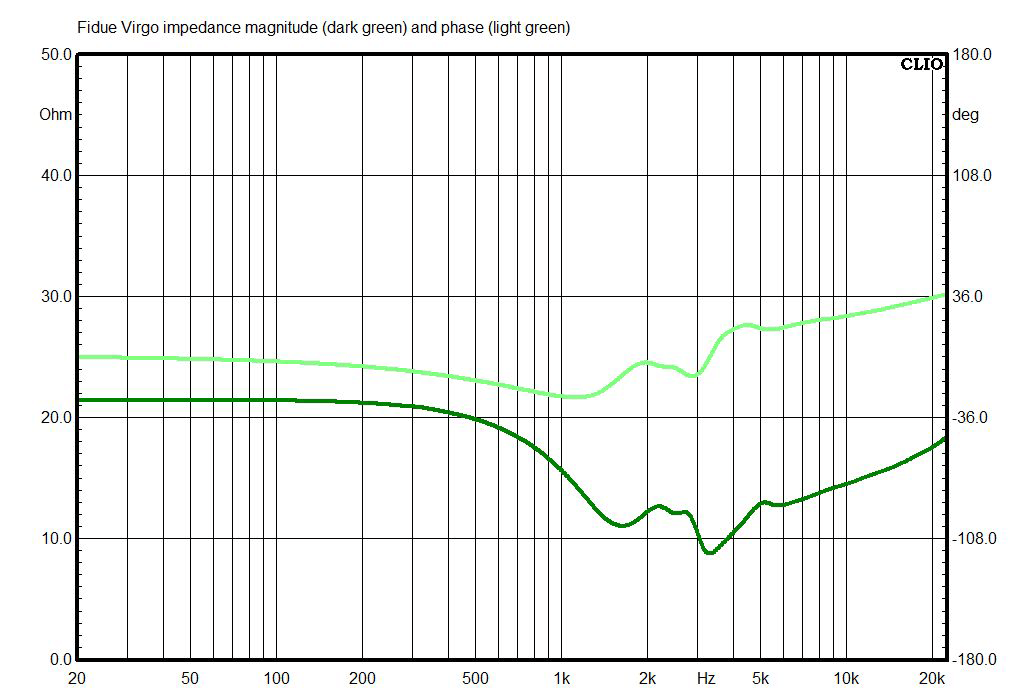 The Virgos’ impedance is unusual for hybrid earphones. Almost all earphones having one or more balanced armatures per earpiece have huge impedance and phase swings in the treble region, but with the Virgos these swings are very mild, more in the range of variance I’d expect to see in earphones having only dynamic drivers. Again, this suggests that the Virgos’ sound will be consistent, regardless of the output impedance of the source device.

The sensitivity of the Virgos, measured from 300Hz to 3kHz with a 1mW signal at the specified 20 ohms impedance, is 111.3dB. You’ll get ample volume from any source device.