I measured the Adante SUB3070’s frequency response using an Audiomatica Clio FW 10 audio analyzer with the MIC-01 measurement microphone. For the frequency-response measurement I used the close-miked technique, with the mike placed as close as possible (about 1/4”) to one of the woofers. For the power-compression measurement I placed the mike on the floor, 2m in front of the sub.

The two sets of measurements I’ve presented here -- CEA-2010 and the traditional method -- are essentially the same. CEA-2010 mandates that no matter how the sub is measured, the results must be scaled to the equivalent of a measurement taken at a distance of 1m using peak values. But the traditional measurement technique used by some audio websites and manufacturers reports results at an RMS equivalent of 2m, which is 9dB lower than CEA-2010. An L next to the result indicates that the output was dictated by the subwoofer’s internal circuitry (i.e., limiter), and not by exceeding the CEA-2010 distortion thresholds. Averages are calculated in pascals. (For more information about CEA-2010, see this article.) 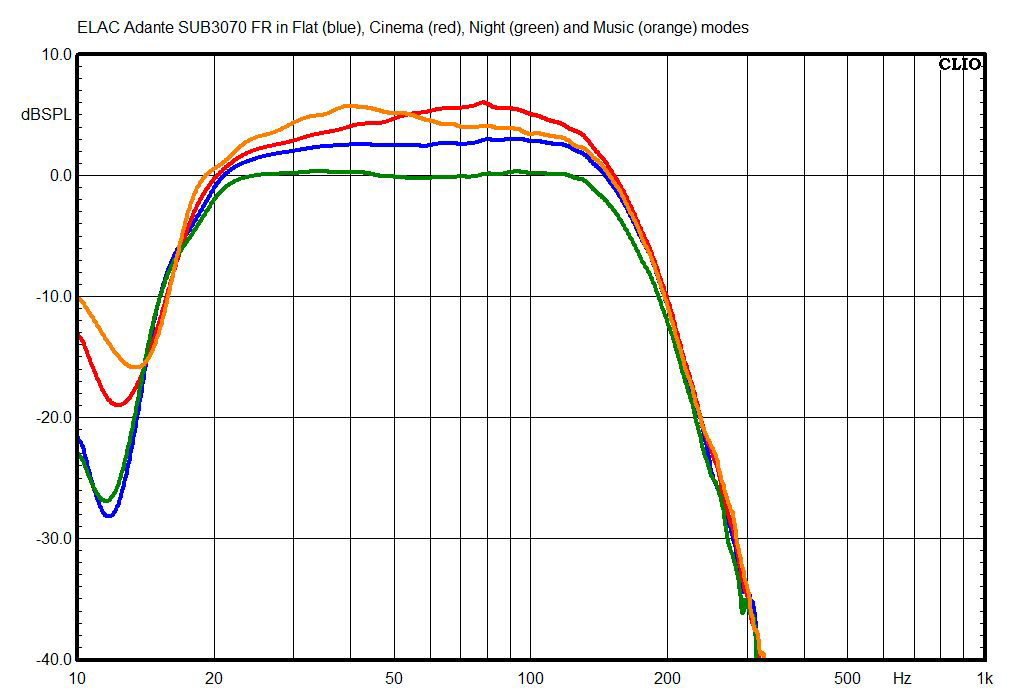 This chart shows the SUB3070’s frequency response with the crossover frequency set to maximum and the sub set for its Flat, Cinema, Night, and Music modes. Flat mode is indeed almost perfectly flat from 30 to 130Hz. Night mode basically lowers the output by about 3dB. Cinema mode boosts output by a maximum of about 3dB, centered at 80Hz. Music mode does the same, but centers the boost at 40Hz. The -3dB point (using the peak of the sub’s response curve as the +3dB reference point) is 18Hz, and the low-pass function of the SUB3070’s crossover is -24dB/octave. 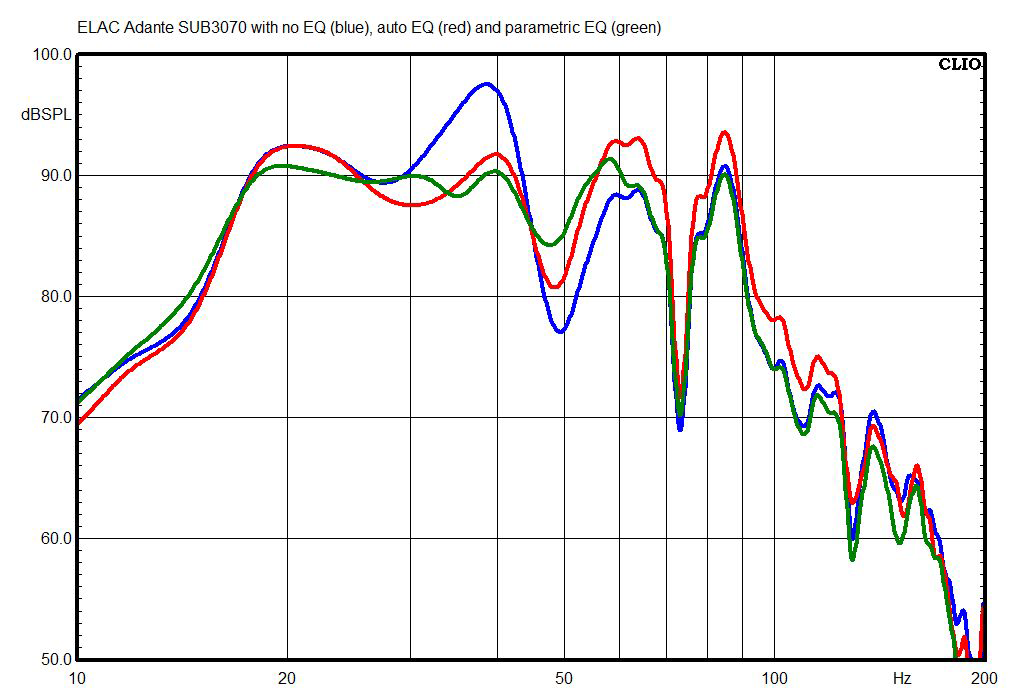 This chart shows the effects of the auto EQ processing with the SUB3070 placed in the corner of my listening room -- not the best spot for a single subwoofer if you want flat response, but it gives the auto EQ circuit a tougher challenge. The mike was placed near my listening position, about 1’ from my head; I placed the smartphone in the same position when I ran the auto EQ. In this case, the auto EQ processing seems to be making some pretty smart adjustments, flattening the response in general and ignoring the suckout at 73Hz, which is impossible for EQ to fill because it’s a cancellation -- the more energy you pump into it, the more will be canceled. Still, I was able to get a flatter curve using the parametric EQ function. 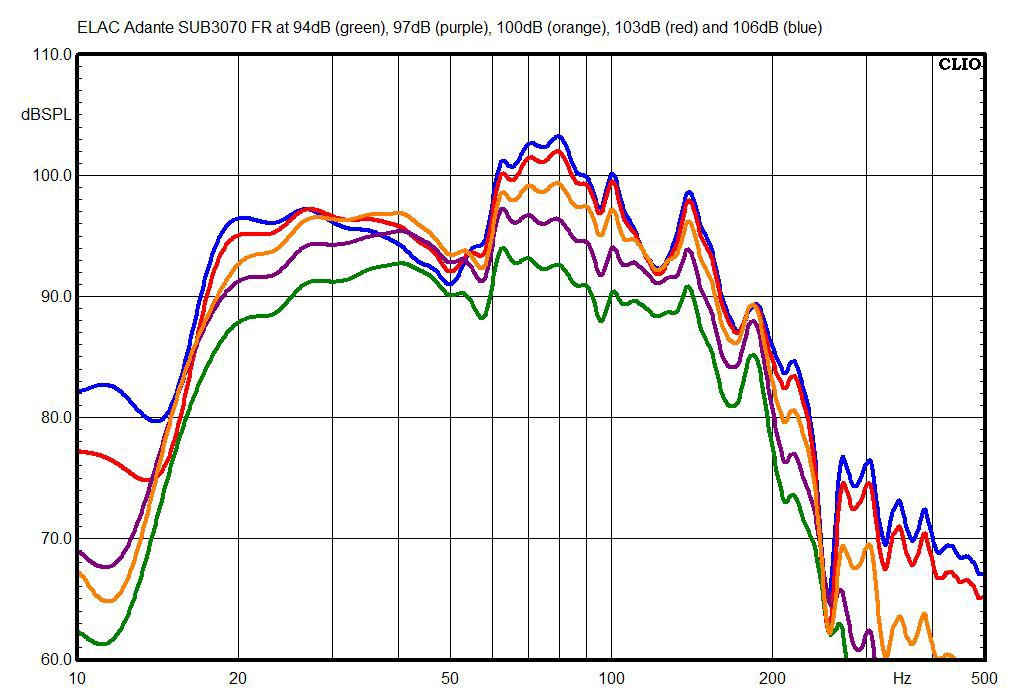 This chart shows how the SUB3070’s frequency response (measured here in Flat mode from 2m) is affected by increases in volume. I measured starting at 94dB, calibrated at 63Hz, then raised the level 3dB for each successive measurement. You can see that the sub’s internal limiter seems to be most restrictive between 30 and 60Hz. 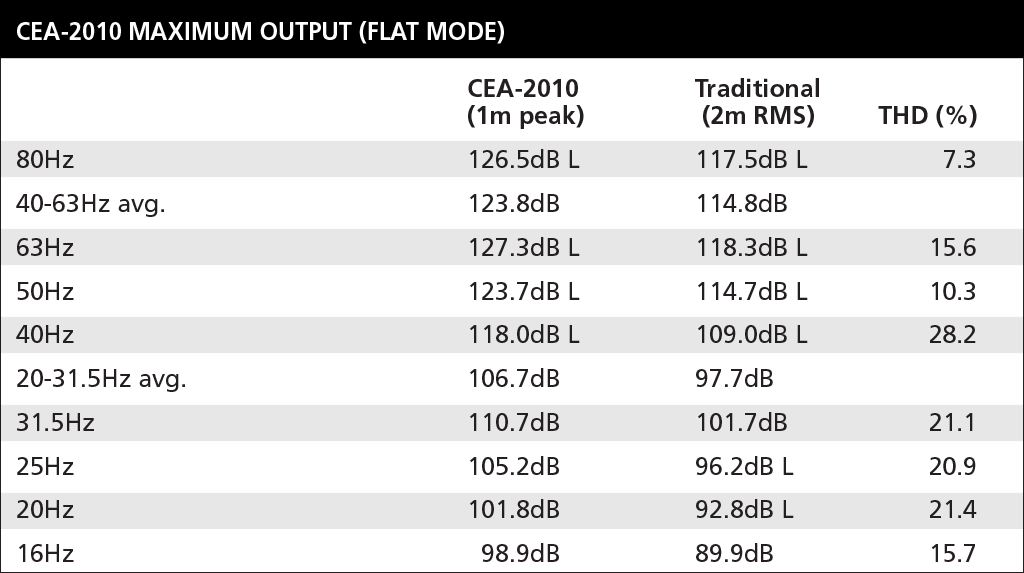 If you’re used to looking at amplifier distortion specs, some of these may look high. But in loudspeakers, and especially subwoofers, much higher distortion levels are the norm, and typically are not audible. The generally accepted threshold for audibility of distortion in subwoofers is 10% THD; CEA-2010 thresholds permit maximum distortion of around 30% THD.

The output of the SUB3070 at 63Hz is, to the best of my recollection, the highest I’ve measured from a sub of this size. However, from there it falls rather quickly, albeit smoothly. Clearly, the SUB3070 is no home-theater bruiser; it focuses more on fidelity with typical music content, which seldom has much going on below 40Hz.

This chart tracks the CEA-2010 results of the SUB3070 (blue trace) and three other subwoofers that are to some extent comparable, though all are less expensive. While at 63Hz the SUB3070 beats even the mighty SVS PC13-Ultra, its bottom-octave output is more akin to that of a typical, less-expensive 12” model.