The two sets of measurements I’ve presented here -- CEA-2010 and the traditional method -- are essentially the same, but the traditional measurement technique used by some audio websites and manufacturers reports results at 2m RMS equivalent, which is -9dB lower than CEA-2010. An L next to the result indicates that the output was dictated by the subwoofer’s internal circuitry (i.e., limiter), and not by exceeding the CEA-2010 distortion thresholds. Averages are calculated in pascals. (For more information about CEA-2010, see this article.) 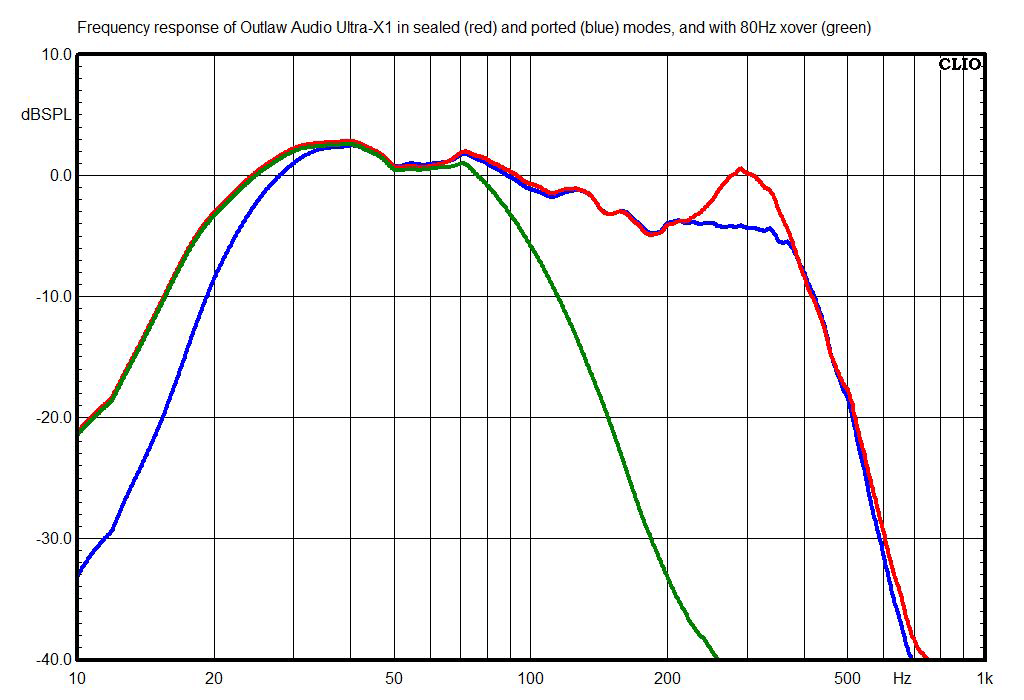 This chart shows the Ultra-X13’s frequency response in sealed and ported modes, and in sealed mode with its internal crossover set to 80Hz. The ±3dB response is 19-161Hz in sealed mode and 24-161Hz in ported mode. The crossover rolloff is -28dB/octave, -4.3dB at the 80Hz setting, which means this control is more accurately calibrated than most subwoofers’ crossover-frequency controls. 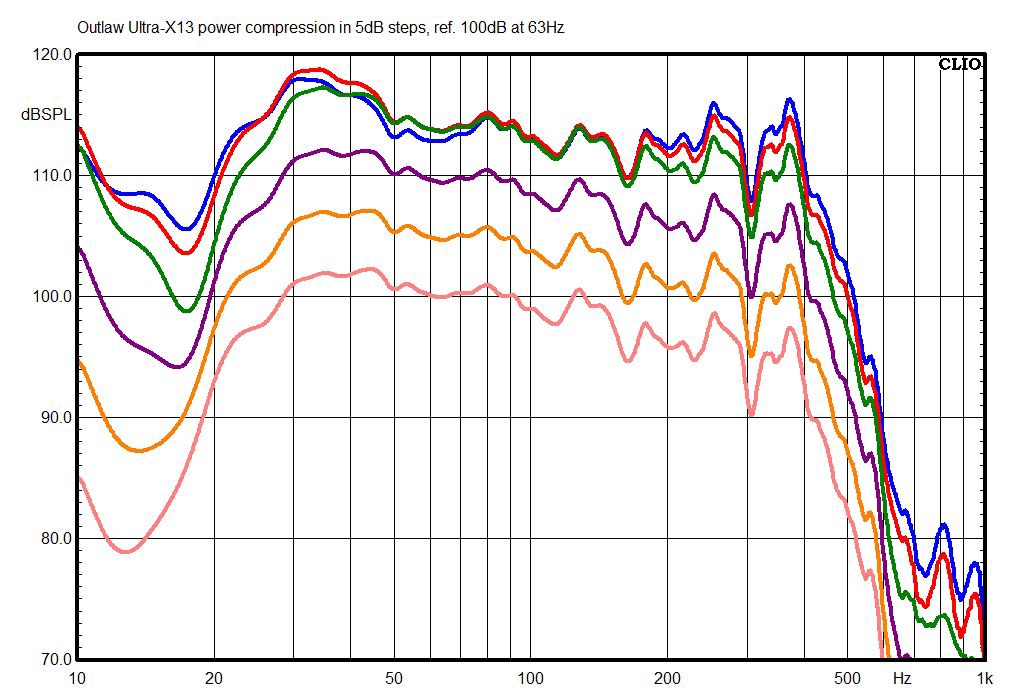 This chart shows how the Ultra-X13’s frequency response is affected by increases in volume. This is an excellent result; with most subwoofers, deep-bass output is greatly reduced relative to midbass output at high levels. I measured this starting at 100dB at 1m, calibrated at 63Hz, then raised the level 5dB for each successive measurement. The frequency response remains essentially consistent at all levels, although because of the limiter, output doesn’t increase much above 120dB (green trace) except at very low frequencies. 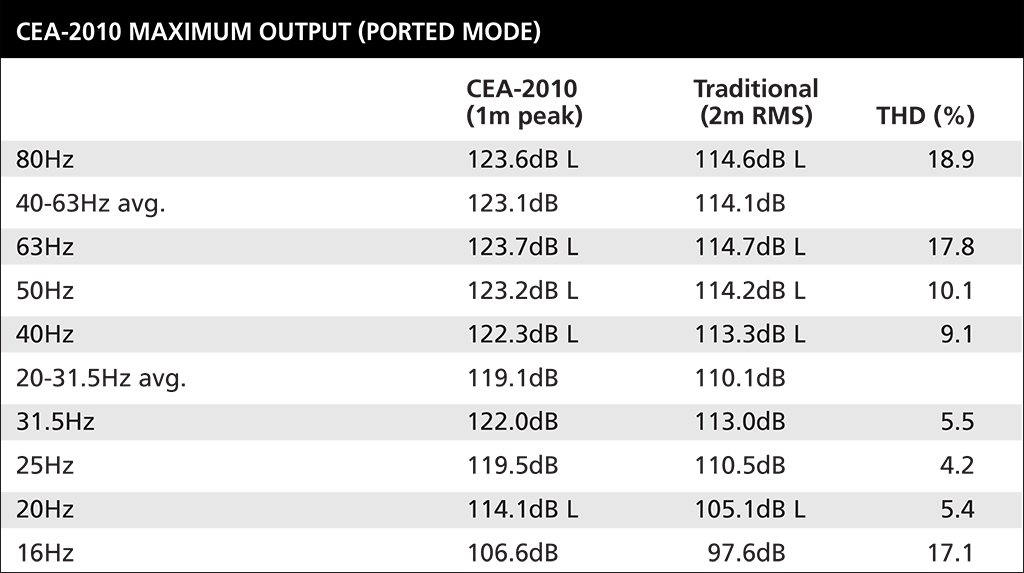 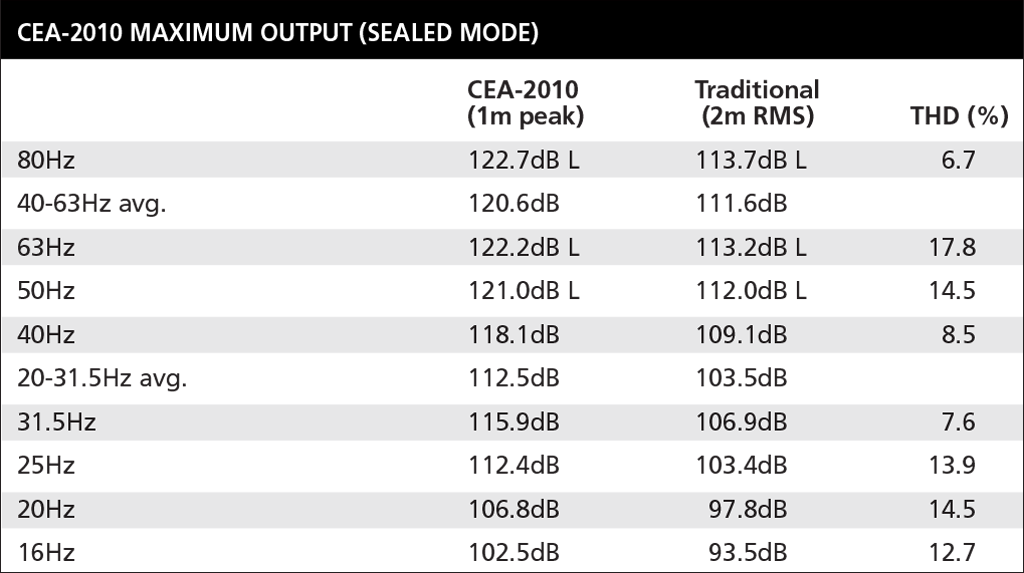 Please note that if you’re used to looking at amplifier distortion specs and haven’t seen subwoofer distortion numbers before, these may look high. But in loudspeakers, and especially subwoofers, much higher distortion levels are the norm, and typically are inaudible. The generally accepted threshold for audibility of distortion in subwoofers is 10% THD, and CEA-2010 thresholds permit maximum distortion of around 30% THD.

The Ultra-X13’s CEA-2010 output numbers are very good, and competitive with the leading subwoofers in its price range. 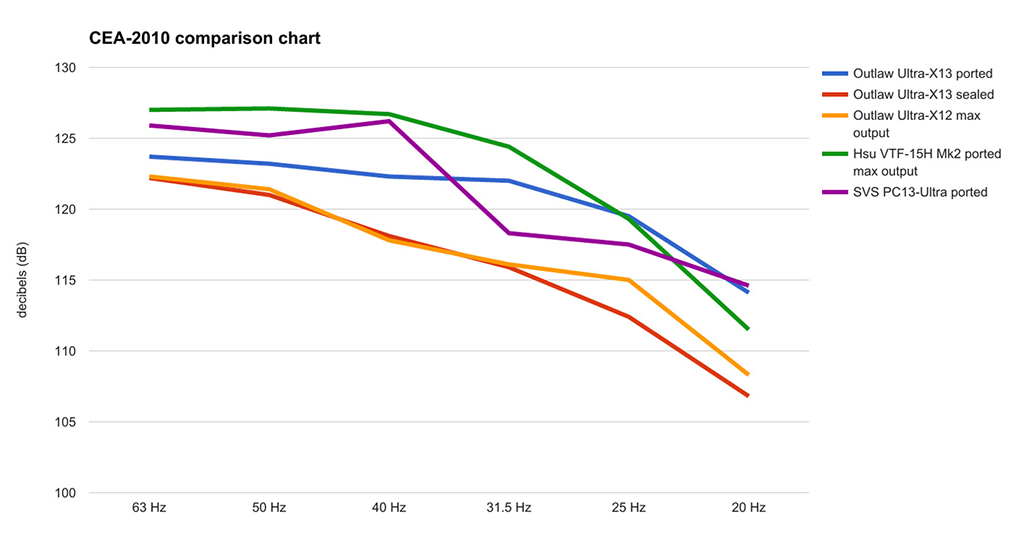 This chart tracks the CEA-2010 results of the Ultra-X13 in ported (blue trace) and sealed (orange trace) modes compared with: the Outlaw Ultra-X12 (red trace, maximum output mode), the SVS PC13-Ultra (purple trace, ported mode), and the Hsu Research VTF-15H Mk2 (green trace). The Ultra-X13 is roughly comparable in ported mode to the SVS PC13-Ultra in ported mode, with a couple dB less output in the middle bass and a couple dB more output in the deep bass.