I measured the performance of the ADL H118 headphones using a G.R.A.S. 43AG ear/cheek simulator, a Clio FW audio analyzer, a laptop computer running TrueRTA software with an M-Audio MobilePre USB audio interface, and a Musical Fidelity V-Can headphone amplifier. Measurements were calibrated for ear reference point (ERP) -- roughly, the point in space where your palm intersects with the axis of your ear canal when you press your hand against your ear, and the place where the front of the headphone’s driver grille will sit when you wear the headphone. This is a “flat” measurement; no diffuse-field or free-field compensation curve was used. I experimented with the position of the earpads by moving them around slightly on the ear/cheek simulator, and settled on the positions that gave the best bass response and the most characteristic result overall. 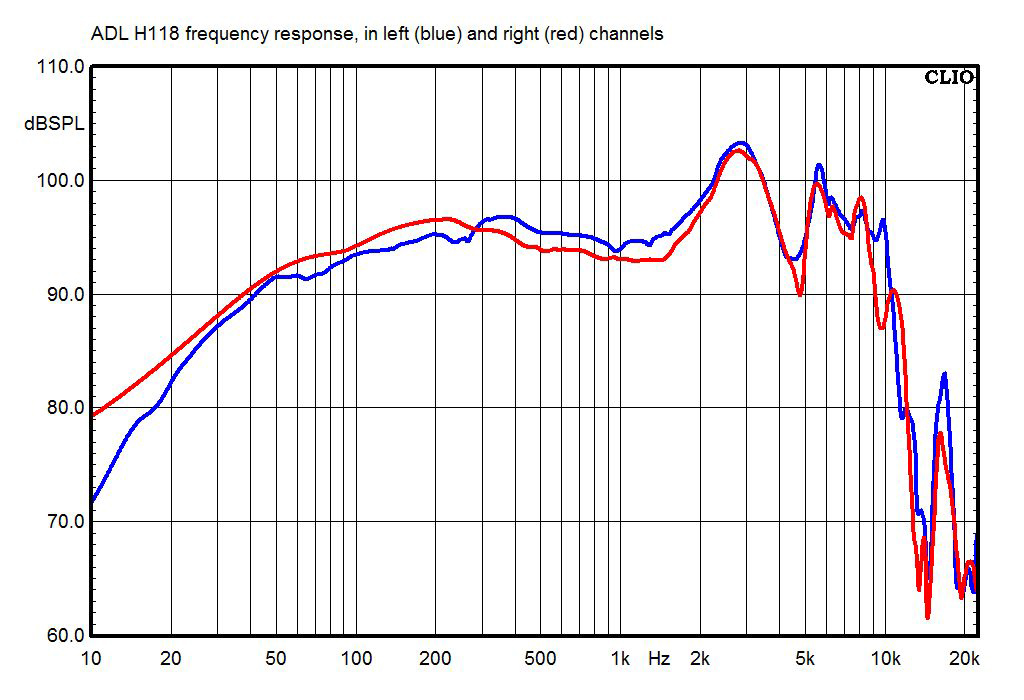 The H118s’ frequency response shows the strong peak centered at 2.8kHz that’s often found in headphone response measurements, as well as a broad, strong boost between 6 and 10kHz. This is similar to the typical diffuse-field equalization used in many headphones. 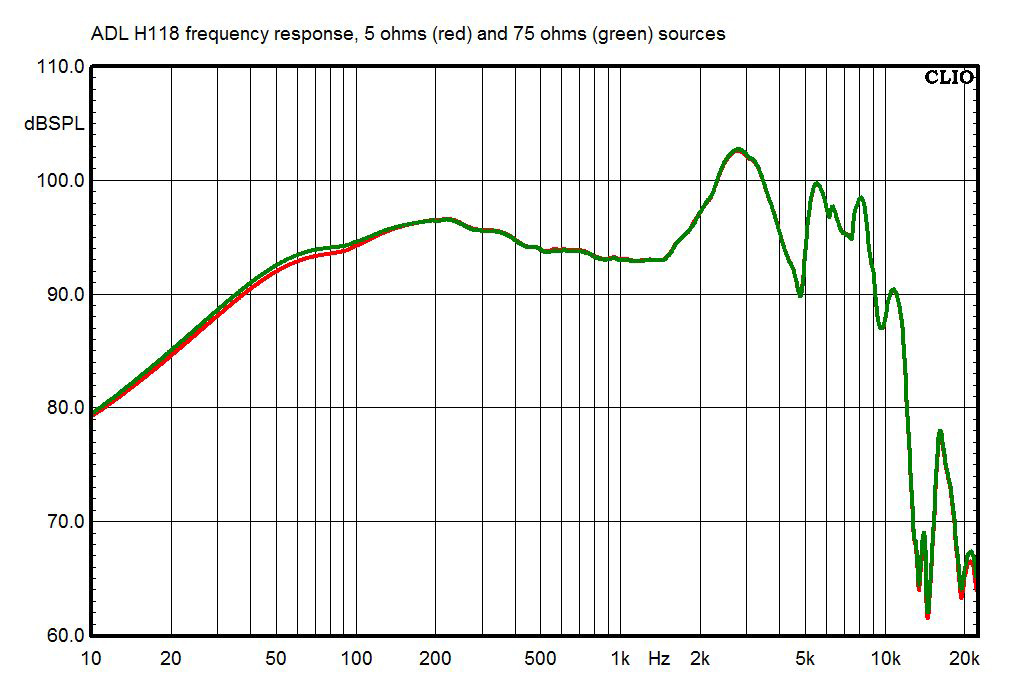 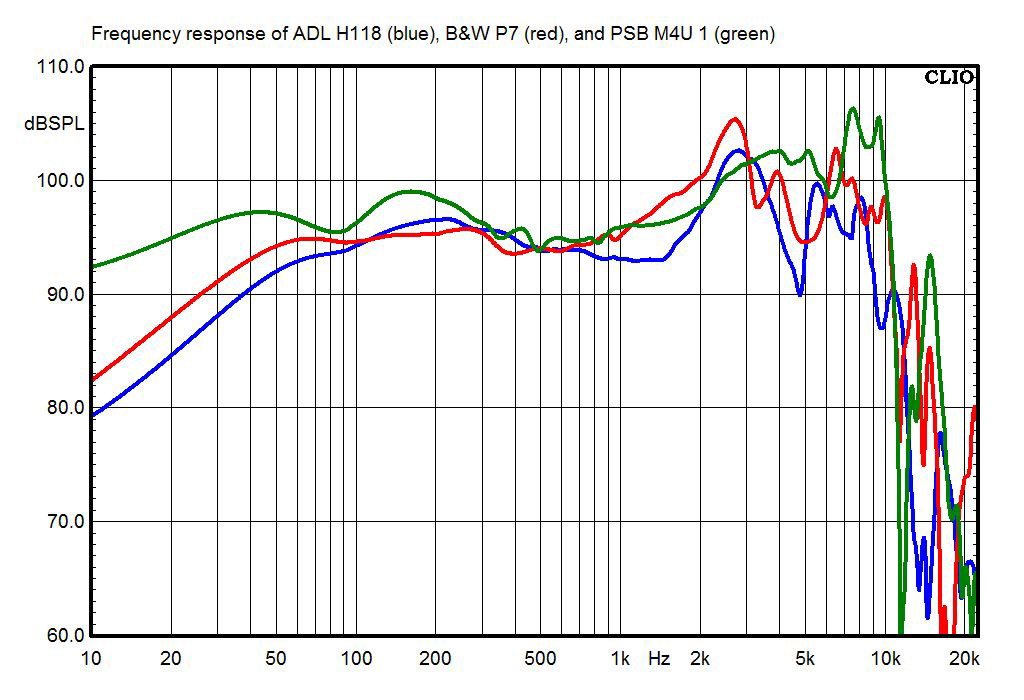 You can see in the chart above that the ADLs’ tonal balance and overall response are quite similar to those of the B&W P7s -- which most reviewers liked. Compared with PSB’s M4U 1 headphones, which some consider to be a reference for a $300 passive design, the ADLs have notably less bass, a little more energy in the 3kHz range (i.e., closer to the classic diffuse-field curve used for many headphones), and less energy in the 8-10kHz range (so probably a bit less “air” than the PSBs). 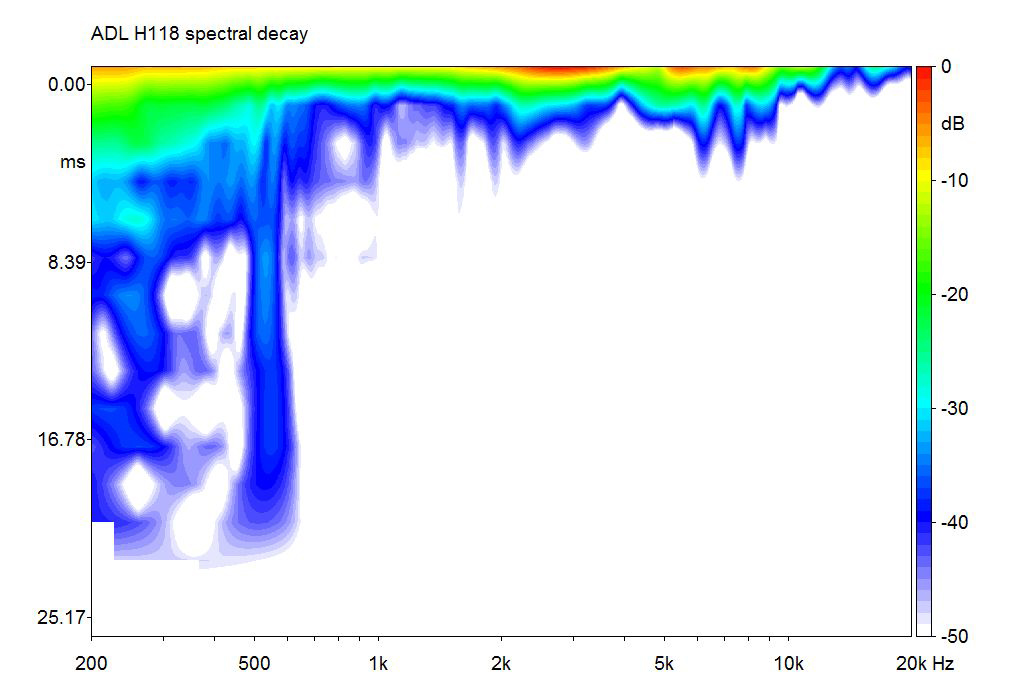 The spectral-decay (waterfall) plot shows a very clean decay above 500Hz, with no noticeable resonances. 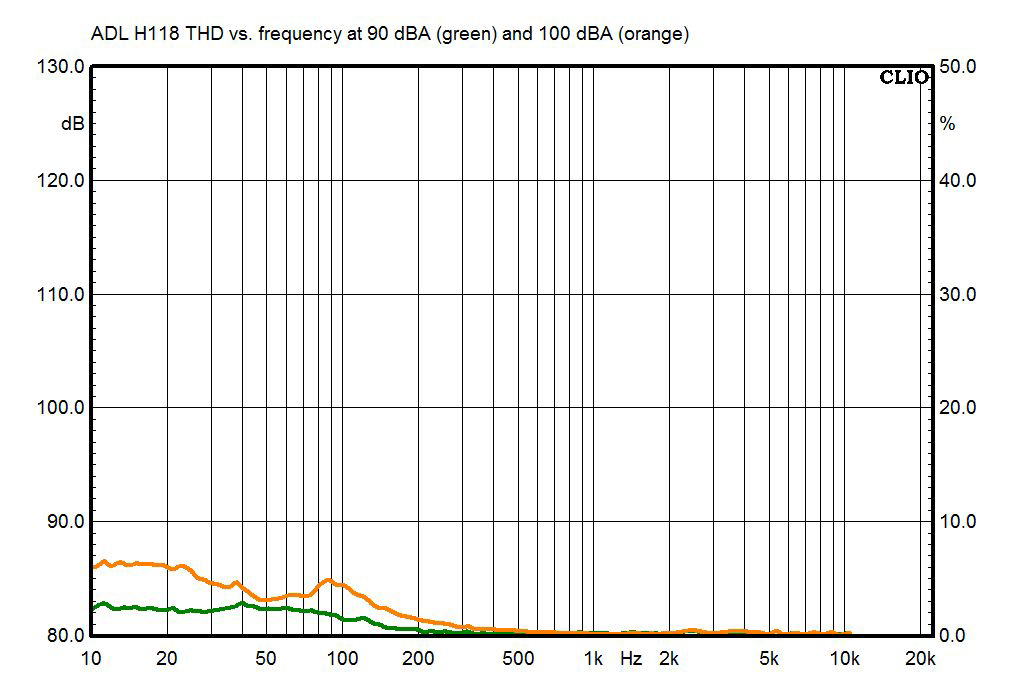 The H118s’ total harmonic distortion (THD) at 100dBA is rather high in the bass, measuring 5 to 8%, and 2 to 3% at 90dBA. You’d probably notice this if you play music with lots of bass at high volumes. 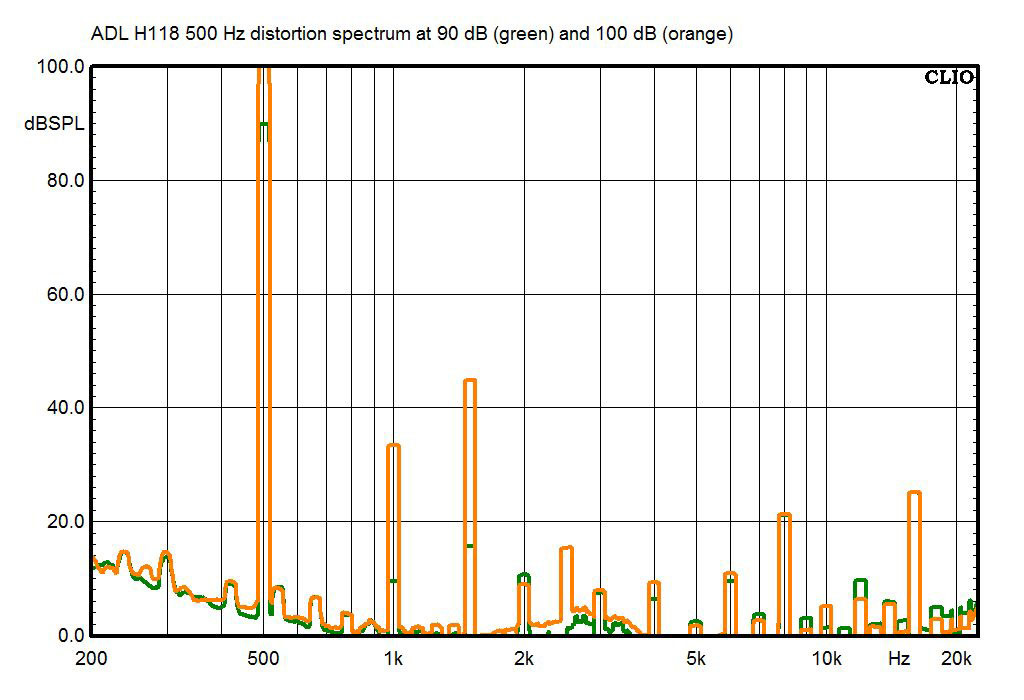 The spectrum of a 500Hz sinewave shows that the distortion is primarily third harmonic (-55dBFS), with a strong presence of second harmonic (-66dBFS) -- it shouldn’t sound terribly objectionable. 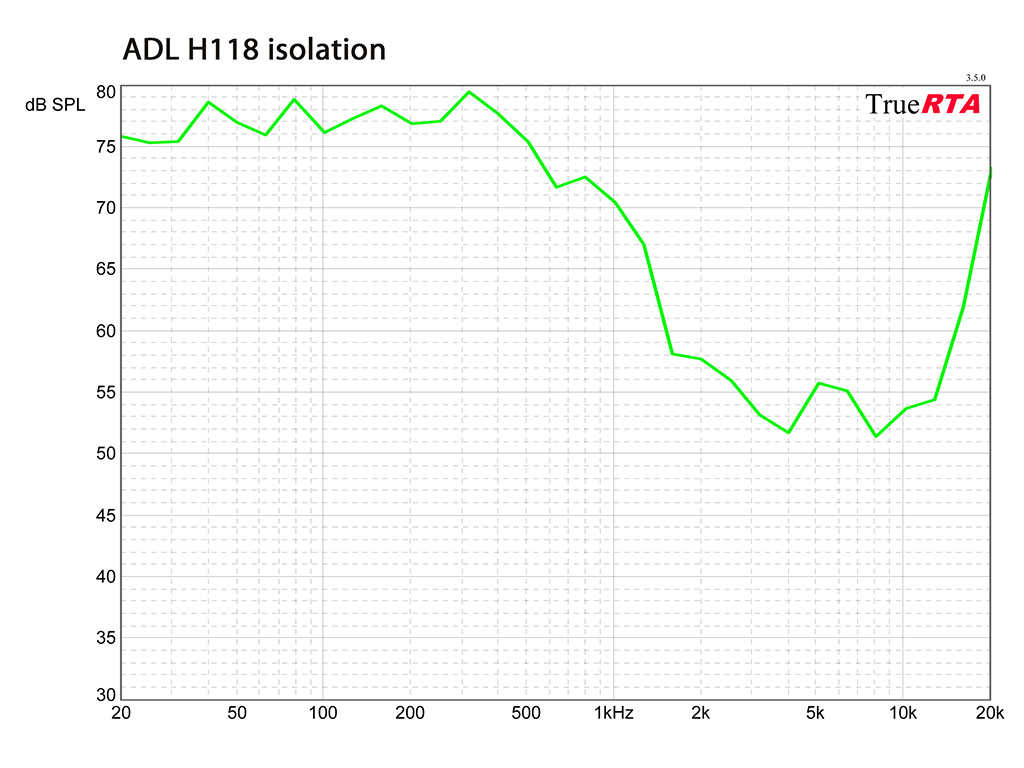 Isolation is a tad less than average for over-ear headphones: -4dB at 1kHz, and typically -20dB at higher frequencies. 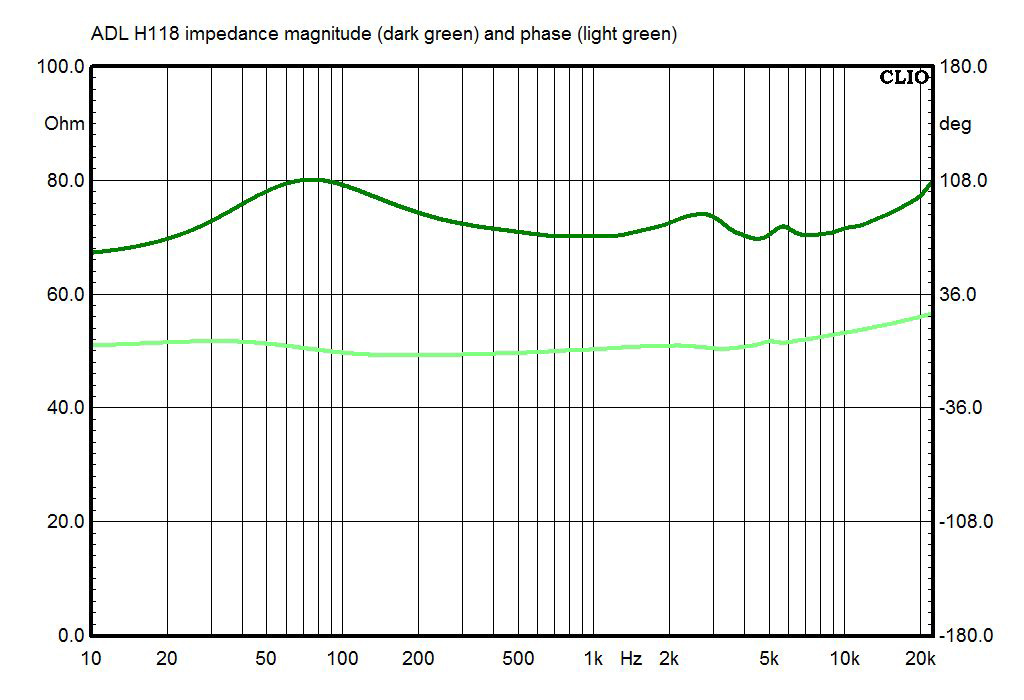