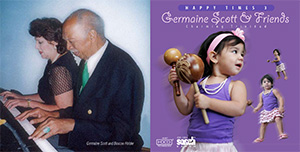 Germaine Scott & Friends has partnered with Sanch Electronix to market and distribute a new CD entitled Charming Trinidad, her third fundraising project in a series entitled Happy Times. Sanch’s managing director, SoundStage! Network contributor Simeon Louis Sandiford, is a lifelong audiophile and recording engineer. Simeon’s latest venture, Pan in Education, is his vision "to create a globally competitive structured music industry that emanates from the classroom." His goal is to raise money for music education in his home country of Trinidad and Tobago.

According to Sandiford, "When Germaine suggested that Happy Times 3 could be used to supplement the initiative, I readily agreed. Furthermore, since the CD would be produced on the Sanch label, listeners would become aware of the mechanical and aesthetic quality that could evolve from small facilities utilizing state-of-the-art equipment and technology for their productions. Additionally, international orders including 24-bit high-resolution digital downloads could be fulfilled from my newly established online shopping facility called The Sanch Marketplace."

Germaine Scott invites you to audition Charming Trinidad, which was launched two days ago on the island. Three of the selections including the title track were composed by her grandfather, George Cabral, circa 1953. He was a former mayor of Port of Spain, the capital city of the Republic of Trinidad and Tobago.