I measured the KZ AZ09 using laboratory-grade equipment: a GRAS Model 43AG ear/cheek simulator/RA0402 ear simulator and an Audiomatica Clio 12 QC audio analyzer. This is not the kind of comprehensive measurements SoundStage! would normally do with audio electronics; it’s merely an attempt to gauge the basic operating parameters and performance limits of the device. All measurements involving earphones are “flat”; no diffuse-field or free-field compensation curve was employed. If you’d like to learn more about what our measurements mean, click here. 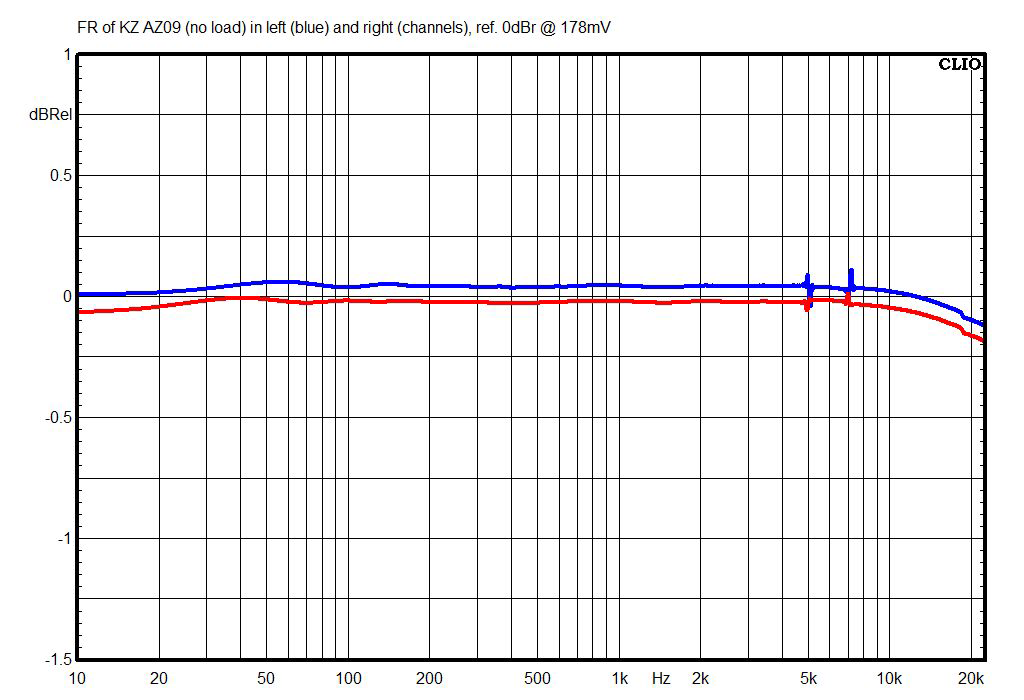 This chart shows the AZ09’s frequency response measured straight into the Clio 12 QC analyzer, with no load. The measurement level was at a “medium” level of 178mV (the drive level required to reach 1mW into a 32-ohm load). Bass rolloff is about -0.1dB at 10Hz; treble rolloff is about -0.3dB at 20Hz—pretty good for a $30 device, and not enough to cause noticeable colorations. There’s a roughly 0.02dB level mismatch between the left and right channels, which will not be audible. The glitches at 5 and 7kHz appeared consistently in both channels; I suspect they are Bluetooth artifacts. They are of too high a Q and too low in magnitude to be audible. 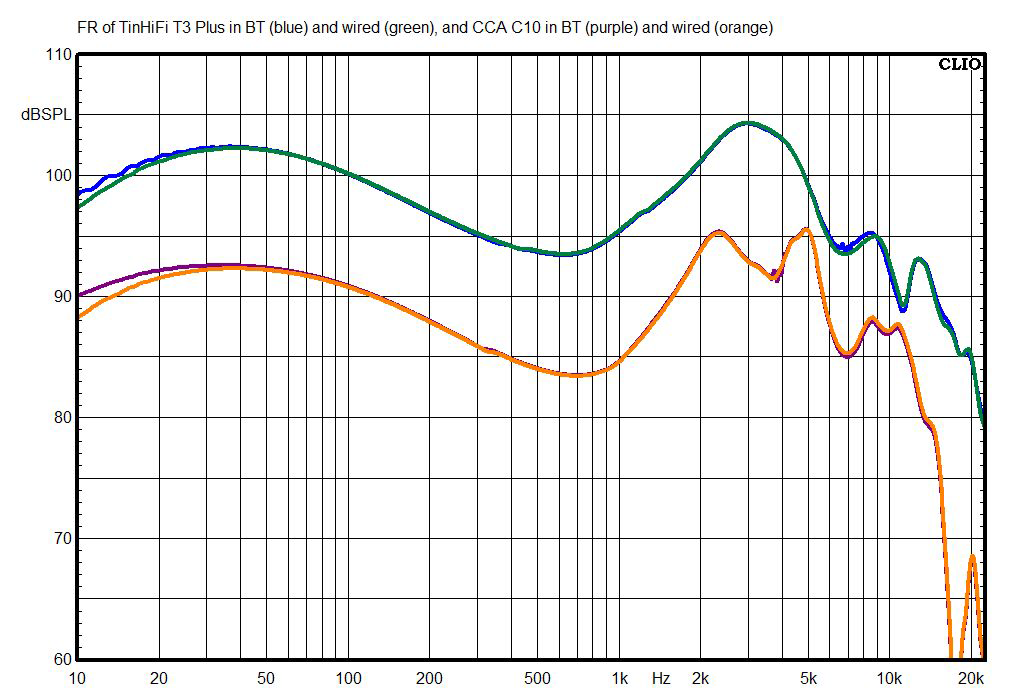 This chart shows how the AZ09 affected the response of the TinHiFi T3 Plus and CCA C10 earphones versus a cabled connection from those earphones to a Musical Fidelity V-CAN headphone amp. With both earphones, the AZ09 produced a tiny bit of extra bass compared with the wired connection: about +1dB at 10Hz for the T3 Pluses, and +1.5dB for the CCA C10s. There are also some tiny differences in the treble, but these are likely due to ordinary measurement-to-measurement variation. 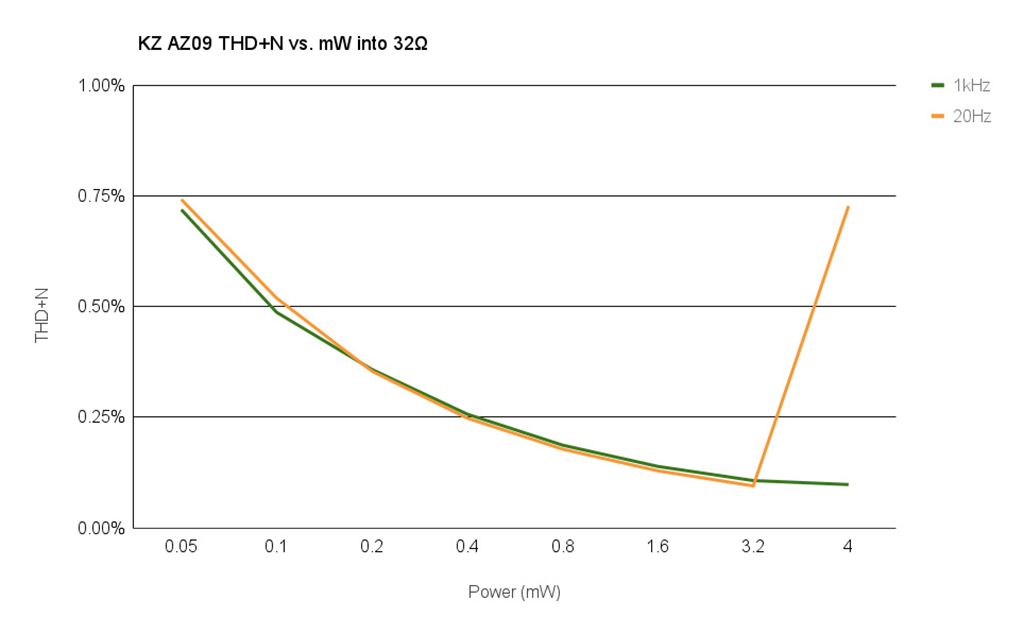 This chart shows the total harmonic distortion plus noise (THD+N) of the AZ09 at gradually increasing output levels, measured into a 32-ohm load. (I would normally measure this into 250- and 600-ohm loads as well, but I have never encountered earphones with such high impedances so the measurement would be irrelevant.) As we see with almost all amplifiers, the signal-to-noise ratio falls as the output increases. Measured at 1kHz, the AZ09 reaches its minimum THD+N at its maximum output of 4.07mW, so at that frequency, it seems impossible to make the AZ09 clip. Wondering if the AZ09 could perform as well in the bass, I reduced the test frequency to 20Hz, and at that frequency, I was able to make the AZ09 clip—although THD+N rose only to 0.73% at the maximum 20Hz output of 4.175mW. That’s not an audible level of distortion at such a low frequency.

Note that the above chart also shows that the AZ09’s output peaks at about 4mW into 32 ohms. That’s not much, but with a typical set of earphones rated at 105dB sensitivity with a 1mW signal, that’ll get you up to 111dB SPL peaks, which is plenty, and enough to damage your hearing if you run the AZ09 at max volume for long periods of time. 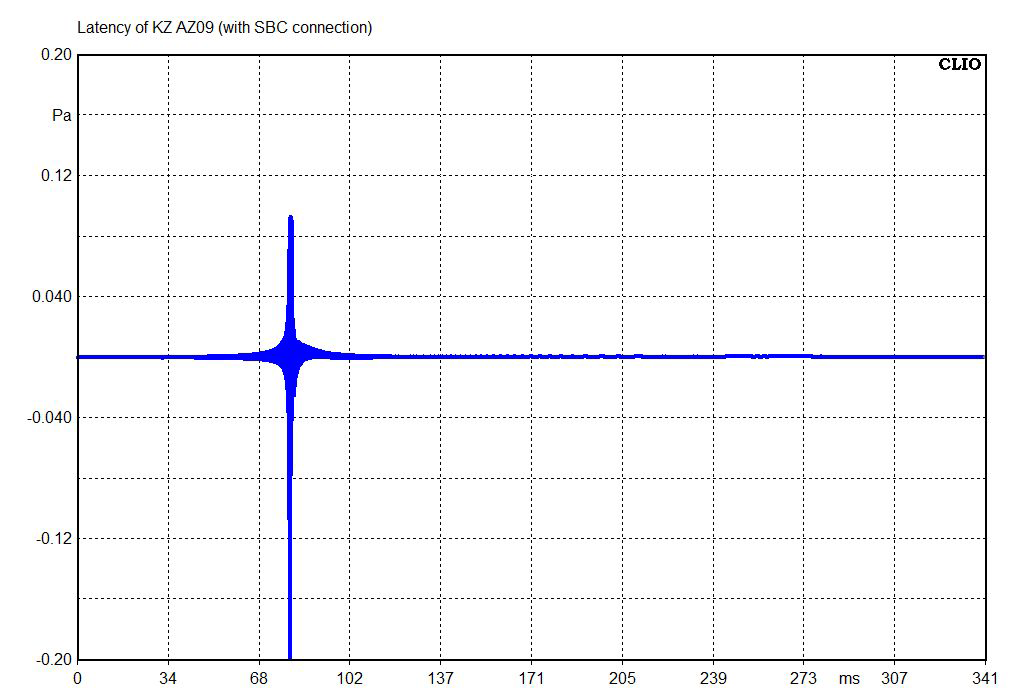 Best-case latency I measured from the AZ09 was about 80ms, which is excellent for a true wireless product, although the latency sometimes jumped up into the 300ms area with some of the measurements I did; that’s more typical for a true wireless product. This is probably irrelevant, though, because latency only matters when you’re watching videos or playing games, and it seems unlikely this product would be used for those purposes.

Output impedance of the AZ09, measured at 1kHz, is 9.1 ohms—which is fairly low compared with other headphone/earphone amps, and probably not high enough to alter the frequency response of any earphones the AZ09 would be used with.

Bottom line: Obviously, the AZ09 has performance limitations compared with a conventional headphone amp or DAC-amp, but it seems well-designed overall, and is unlikely to present any audible problems.