I measured the Topping A50s headphone amplifier using a Clio 10 FW audio analyzer. Note that my focus with these tests is on measurements that confirm these devices’ basic functionality, and that reveal potentially audible problems in an amplifier. 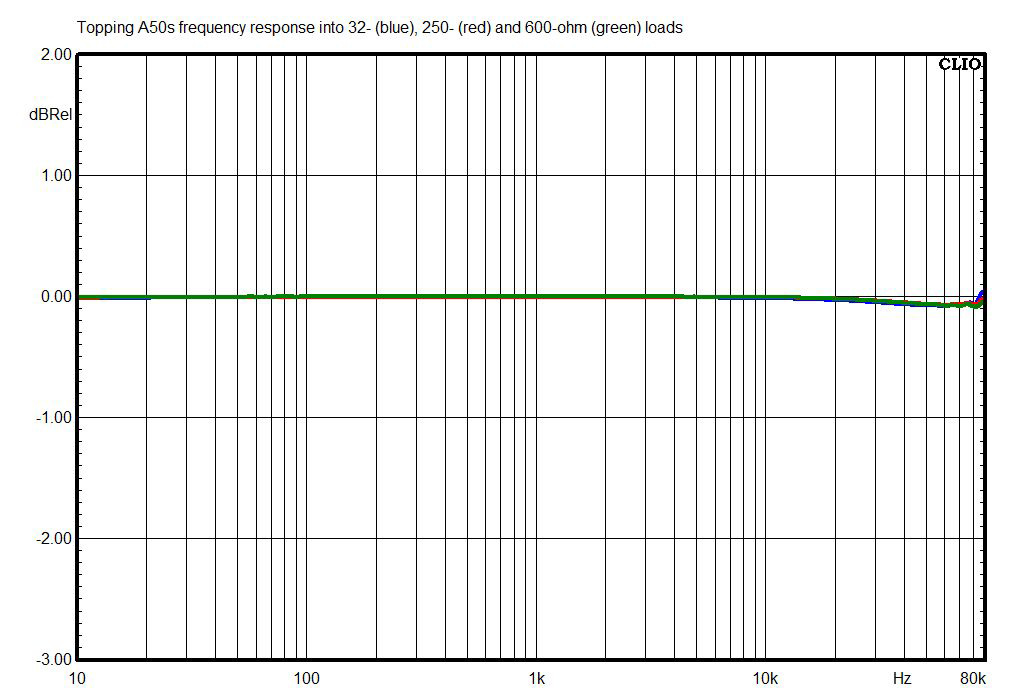 Here you can see the frequency response of the A50s with 32-, 250- and 600-ohm loads, all referenced to 1mW at 1kHz. If memory serves, this is the flattest and most extended response I have measured from a headphone amp. Referenced to 0dB at 1kHz, it’s down 0.019dB at 10Hz, and dips down by 0.0845dB at 60kHz. Channel matching is essentially perfect, and there’s no significant variation as the load changes; any differences would be within the range of accuracy of my test gear. To the best of my memory, this is the first time I haven’t seen any variation in response with load impedance in a headphone amp. 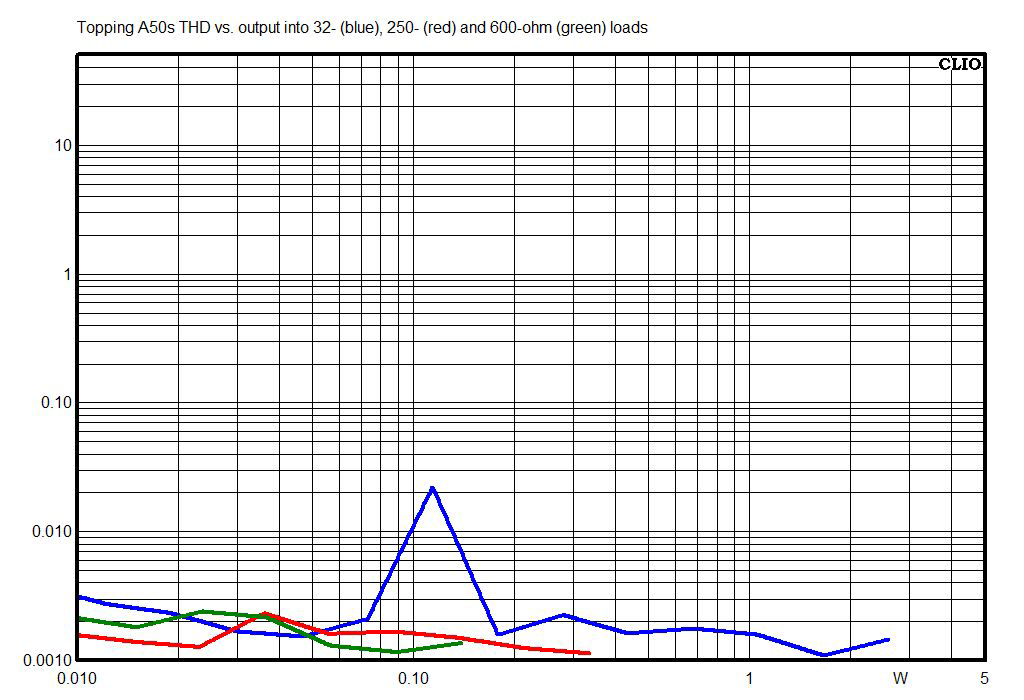 This chart shows the balanced output of the A50s vs. total harmonic distortion (THD) into 32-, 250- and 600-ohm loads at 1kHz. Normally we see a “hockey stick”-shaped trace, with an abrupt rise on the right side of the graph as the amp goes into clipping. But as I noted in the review, the A50s either shuts itself off before producing any significant distortion, or doesn’t have enough gain to produce distortion. Rated power (all with frequency unspecified) is 3500mW into 32 ohms and 760mW into 300 ohms, both at <1% THD. My measurements at 1kHz showed max output into 32 ohms at 2608mW at 0.0014% THD. Into 250 ohms, I measured 332mW at 0.0011% THD, and into 600 ohms, I got 139mW at 0.0013% THD. (Note that the Clio analyzer’s maximum output is 15Vrms, much higher than most DACs put out.) That little spike into 32 ohms at about 110mW does not appear to be a measurement anomaly—it appeared consistently in repeated measurements—but the THD rises only to 0.022%, so it’s of no concern. 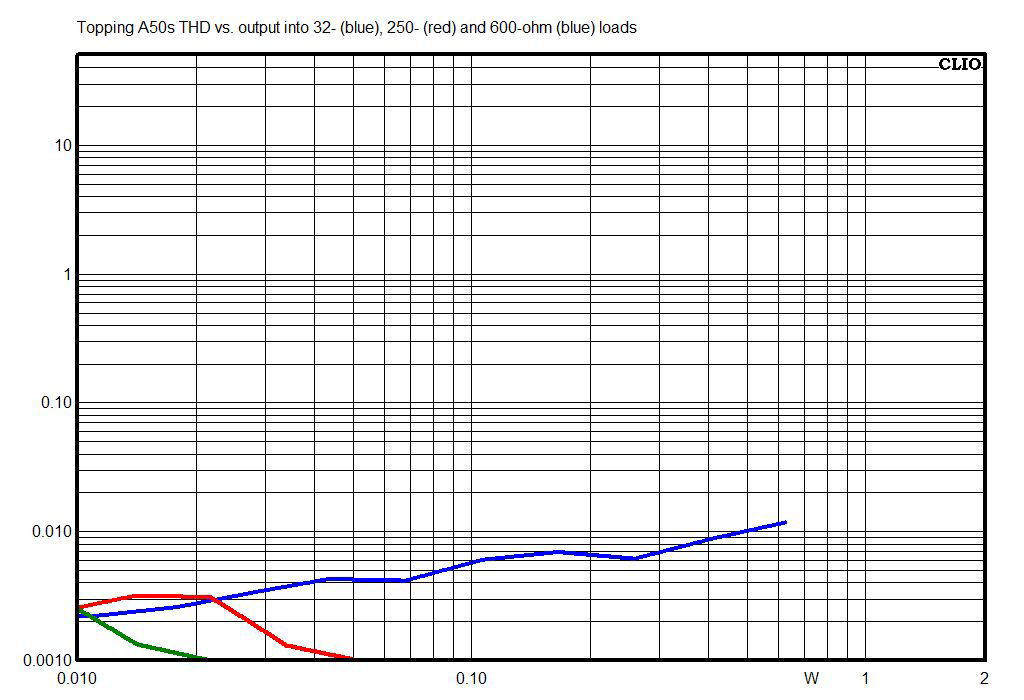 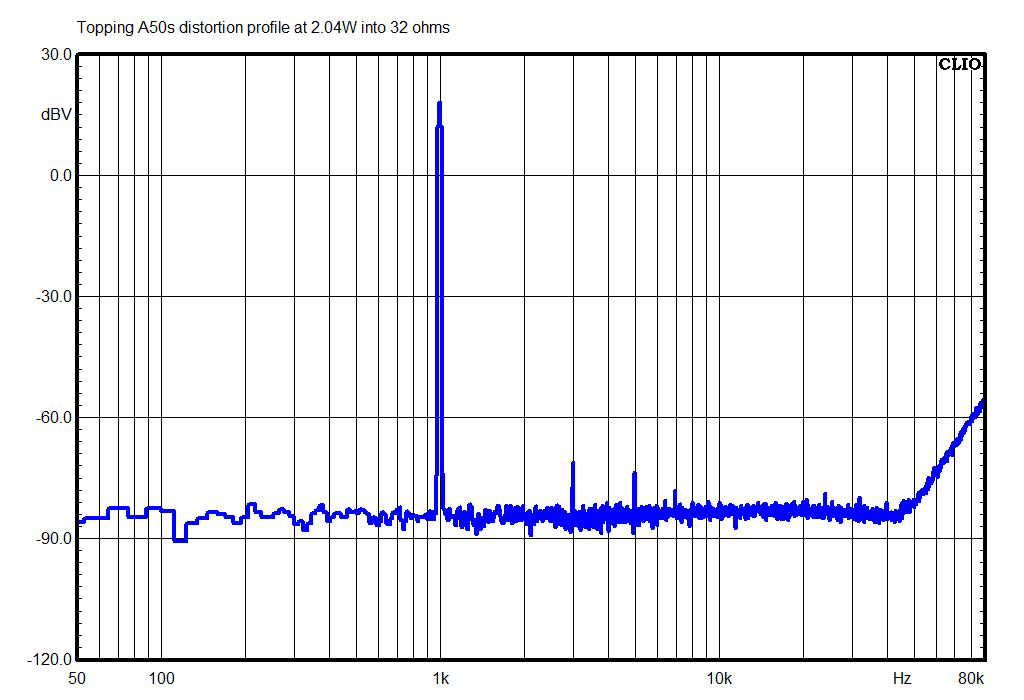 Here you can see the harmonic distortion spectrum and noise floor of the A50s, with a 1kHz tone at 2.04W into a 32-ohm load. Because the amp’s design prevents it from operating with significant amounts of distortion (or as I speculate it might be more accurate to say, shuts it down before the output devices get too hot), I wasn’t able to get it to produce significant amounts of distortion harmonics for long enough to grab a measurement. The upshot is, if you’re hearing distortion when using this amp, it’s coming from the headphones or the source device, not the amp.

Bottom line: The A50s has truly outstanding frequency-response measurements, suggesting that some very talented engineers worked very hard on this amp. While its maximum output is apparently limited by design, and did not, in my tests, reach its rated power, the A50s does produce ample power for all but the most extreme listening situations, and the design of the amp prevents audible distortion.