Link: reviewed by Roger Kanno on SoundStage! Hi-Fi on December 15, 2020

The EX-M1+ uses a digitally controlled, analog-domain volume control, implemented with an integrated circuit (IC) from Muses. The volume can be adjusted from 0 to 100 in 1dB increments, though maximum volume is reached at position 90 – varying the volume from 90 to 100 does not further increase signal amplitude.

We attempted to optimize the volume position to achieve the best signal-to-noise ratio (SNR) and THD+N measurements at the speaker-level outputs (8-ohm loading). Typically, volume set to unity gain is a good starting point. In the case of the EM-X1+, we found better THD+N values with the volume set to 69 as opposed to 86. Most primary measurements and graph data are collected with 10W output into an 8-ohm load. For these measurements, unless otherwise specified, the volume control was set to 69. At this position, 2.1Vrms was required at the balanced input to achieve 10W into 8 ohms.

The EX-M1+ offers one set of balanced (XLR) and three sets of unbalanced (RCA) inputs. Unless otherwise specified, balanced input connections were used for all measurements. With the exception of gain, no significant differences were seen between unbalanced and balanced inputs. There are two toggle switches on the back panel of the EX-M1+, one to lift the signal ground from chassis ground (left on “link” position), the other to engage DC filtering (left on). Neither switch had any effect on THD+N results.

The table below summarizes our primary measurements performed on the EX-M1+. Here we can compare directly against Kinki Studio’s own published specifications for the EX-M1+, which are stated as follows:

Our unweighted THD+N measurement of <0.017% corroborates Kinki Studio’s value of 0.0232%; however, the 0.006% A-weighted value provided by the manufacturer was not substantiated by our measurement of 0.017%. When A-weighted THD+N values are very similar to those measured at full bandwidth (in our case 10Hz to 90kHz), it is an indication that the noise component is low, and the THD component dominates. This is illustrated in our THD measurements, which are just below our THD+N measurements.

Kinki Studio’s signal-to-noise ratio (SNR) claim of >103dB was corroborated by our 103.2dB/102.1dB (L/R) A-weighted SNR measurements. In terms of maximum power output, we measured 208W (1% THD+N unweighted) into 8 ohms (both channels driven) and 290W into 4 ohms, which is slightly below the company’s 8-ohm specification (215Wpc) and well above their 4-ohm specification of equal value. For this test, the line AC voltage never dipped below 123VAC. When we performed this same test on another day, we did manage to squeeze out 216W into 8 ohms (both channels driven) from the EX-M1+; however, during the test, the AC line voltage never dipped below 126VAC, which was 3V higher than the first time.

The 208W (8 ohms) measurement yields a clipping headroom result of -0.14dB (8 ohms). Nonetheless, the EX-M1+ was able to sustain 208W using an 80Hz tone into 8 ohms for 500ms, alternating with the same signal at -20dB of the peak (2.08W) for five seconds, for five continuous minutes without inducing a fault or the initiation of a protective circuit. This test is meant to simulate sporadic dynamic bass peaks in music and movies.

Kinki Studio’s maximum output voltage claim of 55VAC is difficult to decipher. It is likely a measure of the output voltage, measured with no load, when 1% THD+N is reached. Under these conditions, we measured close to the claimed value at 51Vrms (VAC and Vrms are synonyms).

For the gain and input impedance/sensitivity specs, our measurements were all quite different than what the manufacturer provided; however, our measured results are not problematic. We measured 32.9dB of gain in the amplifier (HT bypass input) compared to the claimed 26dB, with an input sensitivity of 870mVrms compared to the claimed 2.25 to 3.6Vrms. Our input impedance measurement (balanced input) came in at 190k ohms, well above Kinki Studio’s 50k ohms. 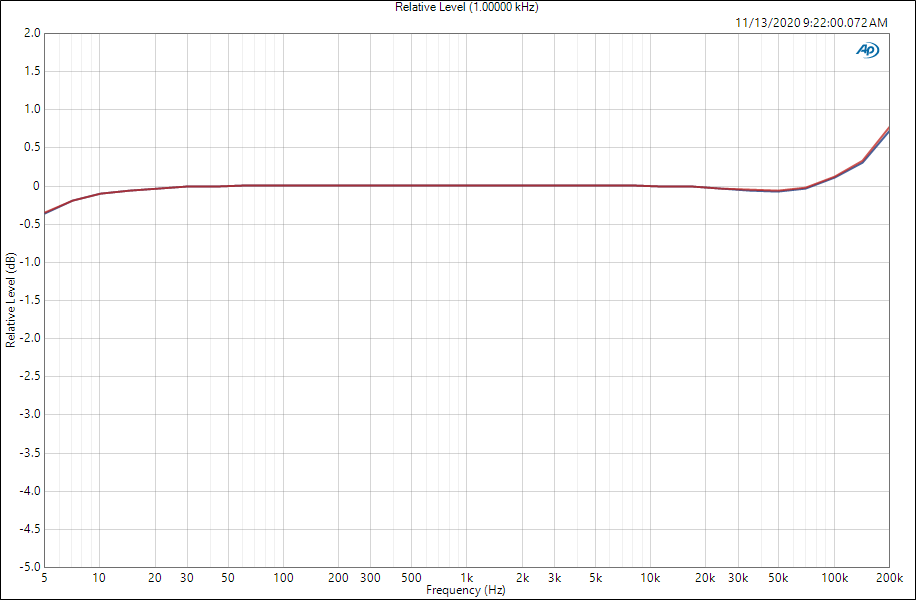 In our measured frequency response plot above, the EX-M1+ is essentially perfectly flat within the audio band (20Hz to 20kHz). Therefore, Kinki Studio’s claim of +/-3dB from 10Hz to 150kHz is corroborated by our measurement. The EX-M1+ is at about -0.1dB at 10Hz and no worse than +0.3dB at 150kHz. As a result, the EX-M1+ can be considered a high-bandwidth audio device. In the graph above and most of the graphs below, only a single trace may be visible, which is because the left channel (blue or purple trace) is performing identically to the right channel (red or green trace), and so they perfectly overlap, indicating that the two channels are ideally matched. 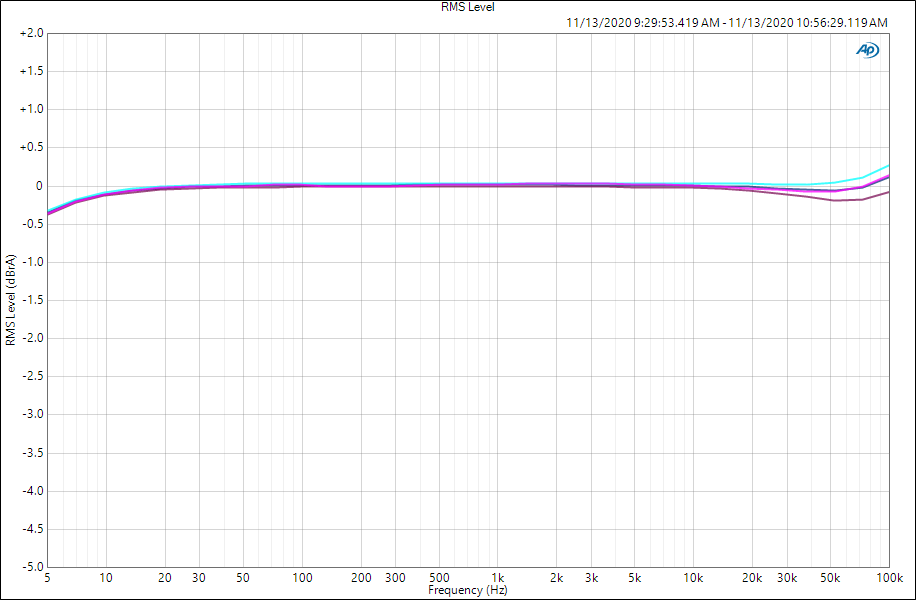 The chart above shows RMS level (relative to 0 dBrA, which is 1W into 8 ohms or 2.83Vrms) as a function of frequency, for the balanced input swept from 5Hz to 100kHz. The blue line is into an 8-ohm load, the purple line is into a 4-ohm load, the pink line is an actual speaker (Focal Chora 806, measurements can found here), and the cyan line is no load connected to the EX-M1+. The top graph shows that all four plots are tightly bunched together, only deviating above 30kHz. This is an indication of a high damping factor, with a correspondingly low output impedance. 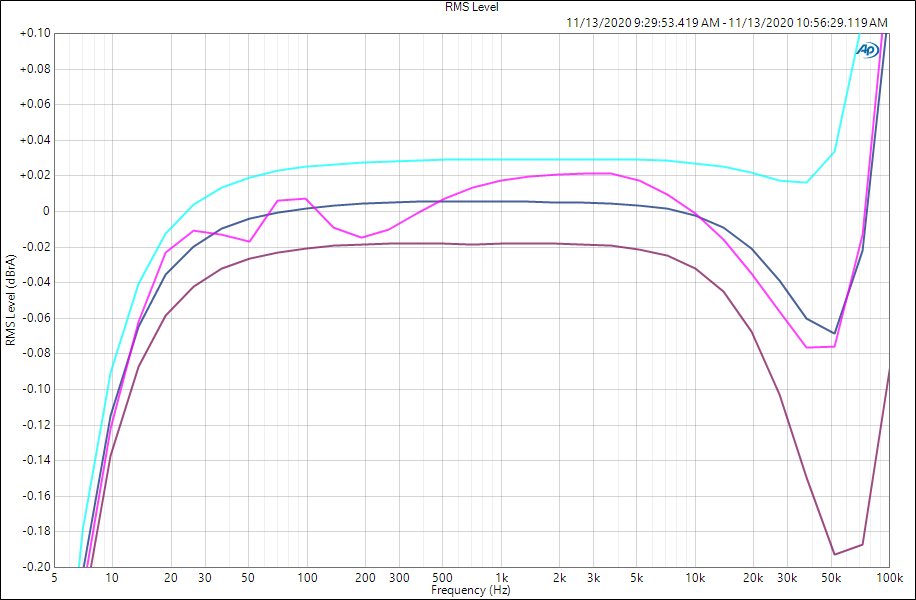 The chart above shows the same data, but with the vertical axis expanded to show differences. Here we find that there’s a total deviation of only 0.05dB in the flat portion of the curve between 4 ohms and no load. At the frequency extremes (20Hz and 20kHz), the spread is essentially the same at 20Hz compared to the flat portion of the curve, and about 0.09dB at 20kHz. The maximum variation in RMS level when a real speaker was used as a load is very small, deviating by less than 0.04 dB within almost the entire audio band (-0.06dB at 20kHz relative to 2kHz). The lowest RMS level, which would correspond to the lowest impedance point for the load, was exhibited at around 50Hz and 200Hz, and the highest RMS level, which would correspond to the highest impedance point for the load, was seen between 2 and 4kHz. 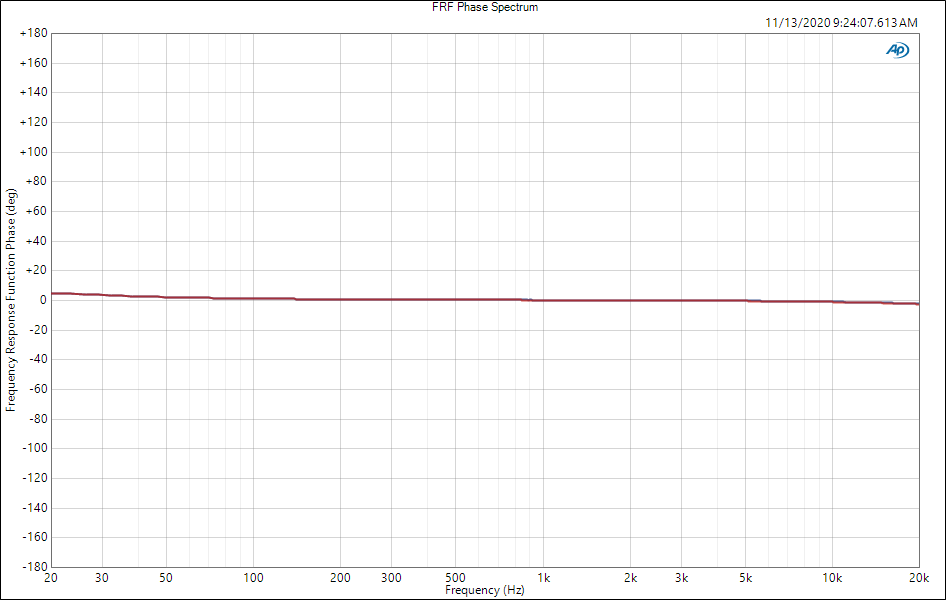 Above is the phase response plot for the EX-M1+, from 20Hz to 20kHz. The EX-M1+ does not invert polarity, and there is virtually no phase shift throughout the audio band, with a worst case of under +5 degrees at 20Hz. 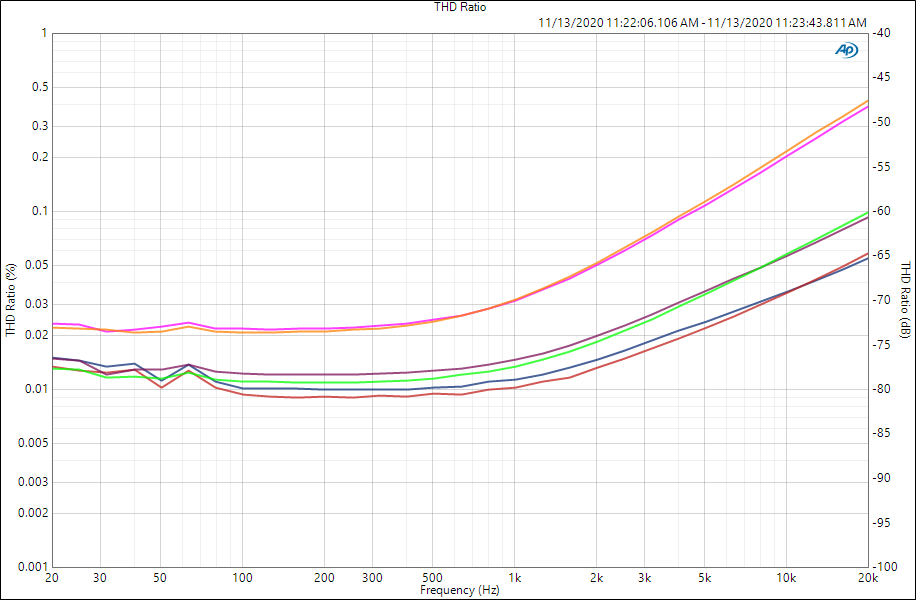 The chart above shows THD ratios with 8-ohm loading as a function of frequency (20Hz to 20kHz) for a sinewave stimulus at the line level input. The blue and red lines are for left and right channels at 1W output, purple/green at 10W, and pink/orange at 143W (all into 8 ohms). The power was varied using the EX-M1+’s volume control. At 1W and 10W, the THD values are quite close, with the 1W figures slightly outperforming the 10W figures by a few dB at 1kHz and below, and by as much as 10dB at 20kHz. The general trend of the lowest THD figures appearing at lower frequencies (between 0.01% and 0.02%), with higher figures at high frequencies (0.05% to 0.1% at 20kHz), was consistent for both the 1W and 10W data. The 143W data showed higher THD values, with the same general trend as the lower-output power data, but ranging in values from 0.02% (20Hz to 300Hz) to 0.4% at 20kHz. 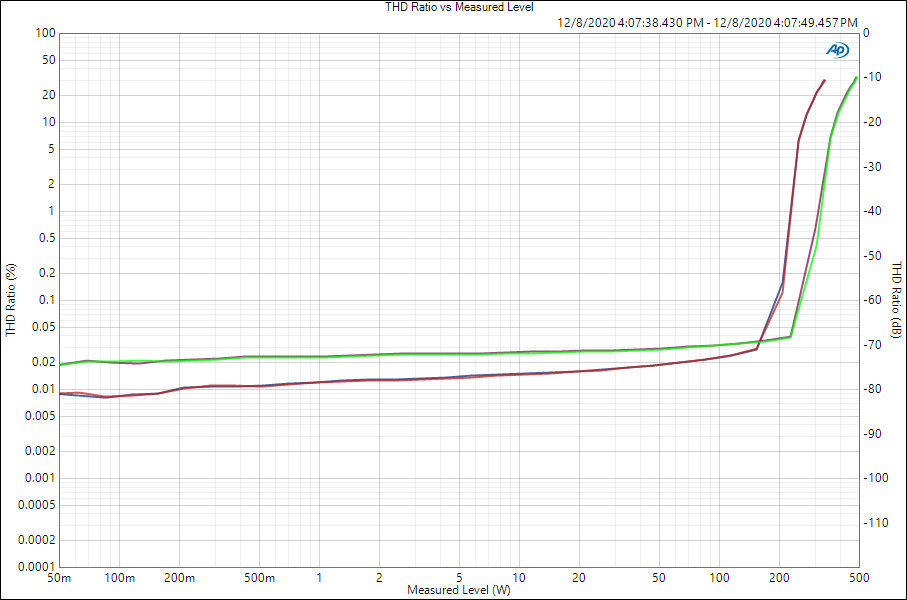 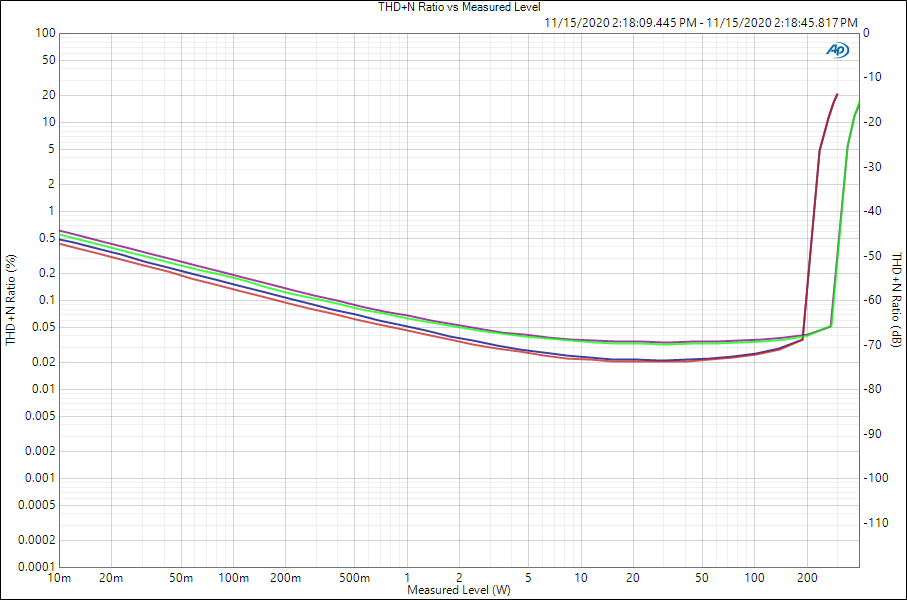 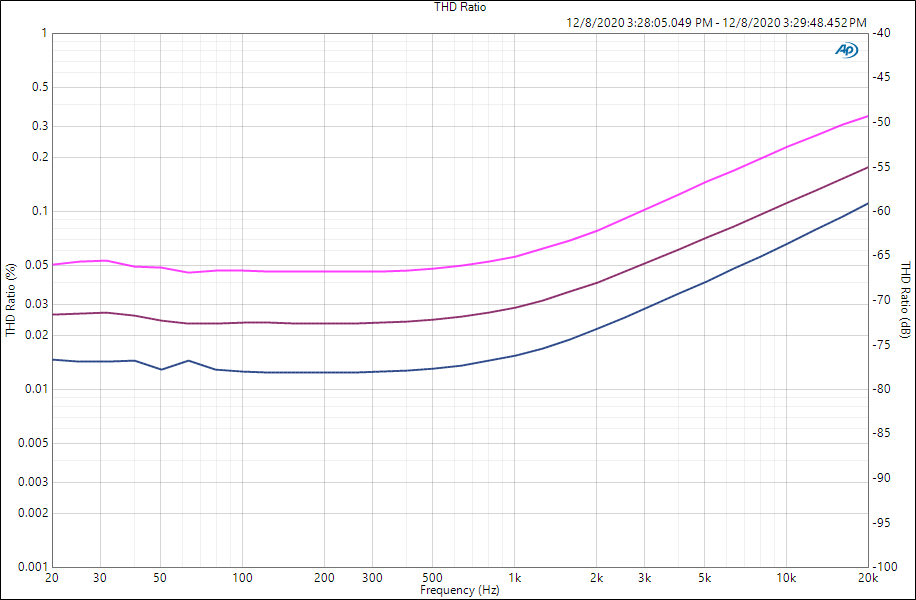 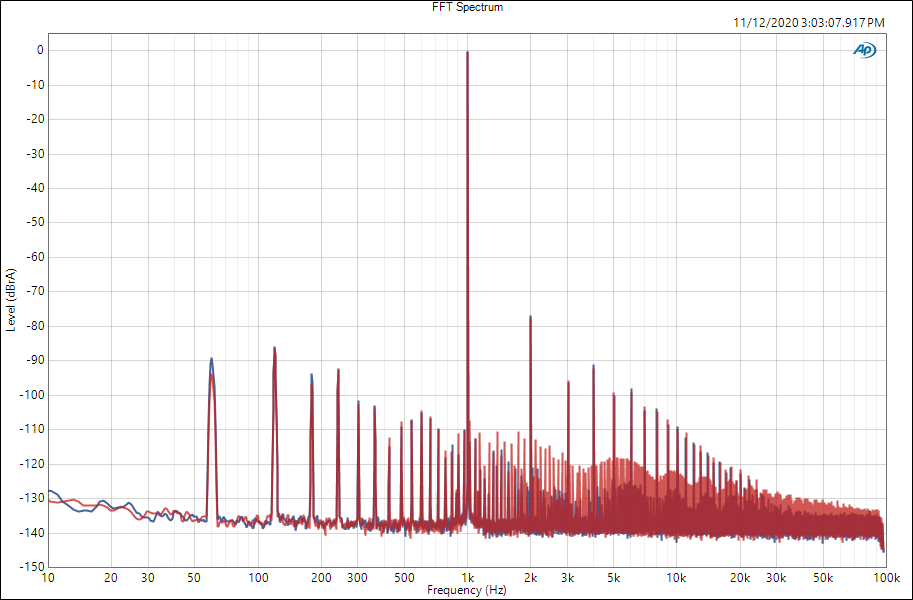 Shown above is the fast Fourier transform (FFT) for a 1kHz input sinewave stimulus, measured at the output across an 8-ohm load at 10W. We see that the second harmonic, at 2kHz, is just above -80dBrA (relative to the reference 0dB signal), while the third harmonic, at 3kHz, is at about -95dBrA. The even-order harmonics are higher in amplitude than the odd order, with the fourth harmonic at 4kHz sitting just below -90 dBRa, but higher than the 3kHz distortion product. Below 1kHz, we see noise artifacts, with the 60Hz peak due to power supply noise at around -90dBrA, and the 120Hz peak just exceeding the 60Hz peak at -85dBrA. The third- and fourth-order harmonics from the power-supply noise at 180 and 240Hz are both at around -95dBrA. 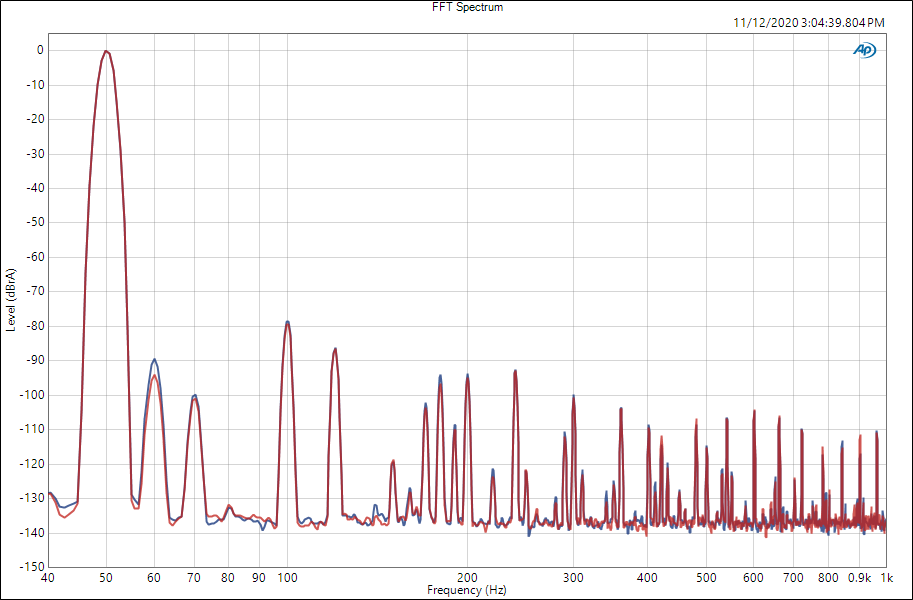 Shown above is the FFT for a 50Hz input sinewave stimulus measured at the output across an 8-ohm load at 10W. The X axis is zoomed in from 40Hz to 1KHz so that peaks from noise artifacts can be directly compared against peaks from the harmonics of the signal. The second harmonic of the 50Hz signal (100Hz) dominates at -80dBrA with the second-highest distortion artifact resulting from the 60Hz power-supply noise second harmonic at 120Hz at around -85dBrA. The 180Hz peak (third harmonic due to noise), 200Hz peak (fourth harmonic from signal), and 240Hz peak (fourth harmonic from noise) are all residing around -95dBrA. 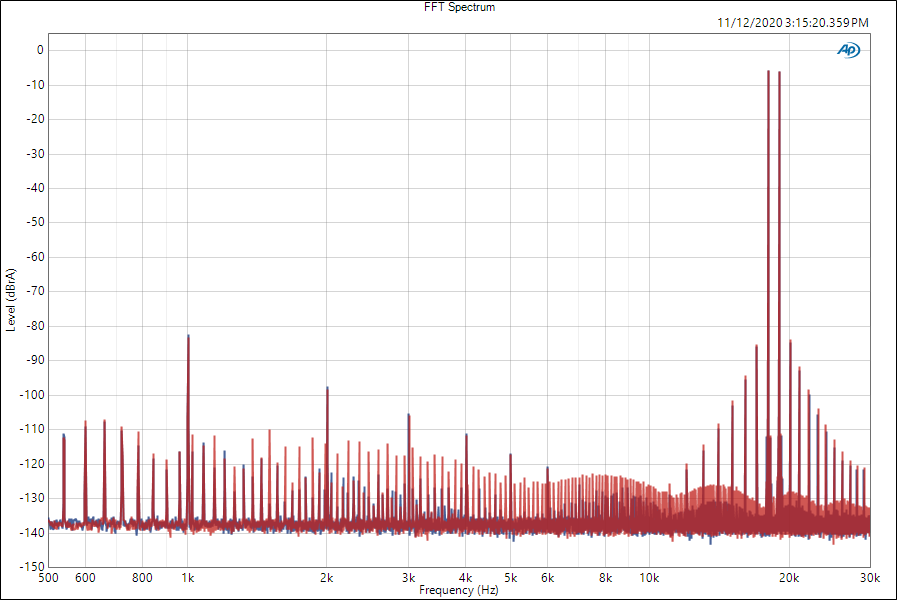 Shown above is the FFT of the intermodulation (IMD) products for an 18kHz + 19kHz summed sinewave stimulus tone at the balanced input. The input RMS values are set at -6.02dBrA so that, if summed for a mean frequency of 18.5kHz, would yield 10W (0dBrA) into 8 ohms at the output. We find that the second-order modulation product (i.e., the difference signal of 1kHz) is approaching -80dBrA, while the third-order modulation products, at 17kHz and 20kHz are almost as high, at around -85dBrA. 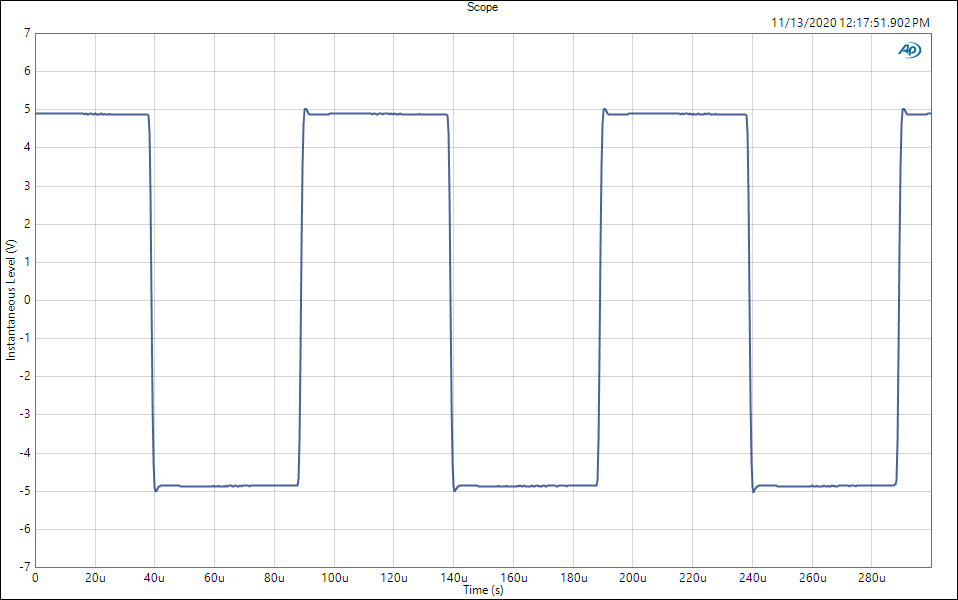 Above is the 10kHz squarewave response of the EX-M1+ using the balanced input, at 10W into 8 ohms. Due to limitations inherent to the Audio Precision APx555 B Series analyzer, this graph should not be used to infer or extrapolate the EX-M1+’s slew-rate performance. Rather, it should be seen as a qualitative representation of the EX-M1+’s extended bandwidth. An ideal square wave can be represented as the sum of a sinewave and an infinite series of its odd-order harmonics (e.g., 10kHz + 30kHz + 50kHz + 70kHz . . .). A limited bandwidth will show only the sum of the lower-order harmonics, which may result in noticeable undershoot and/or overshoot, and softening of the wave’s edges. The Kinki Studio’s reproduction of the 10kHz squarewave is very clean, with sharp edges, with minimal overshoot in the corners. 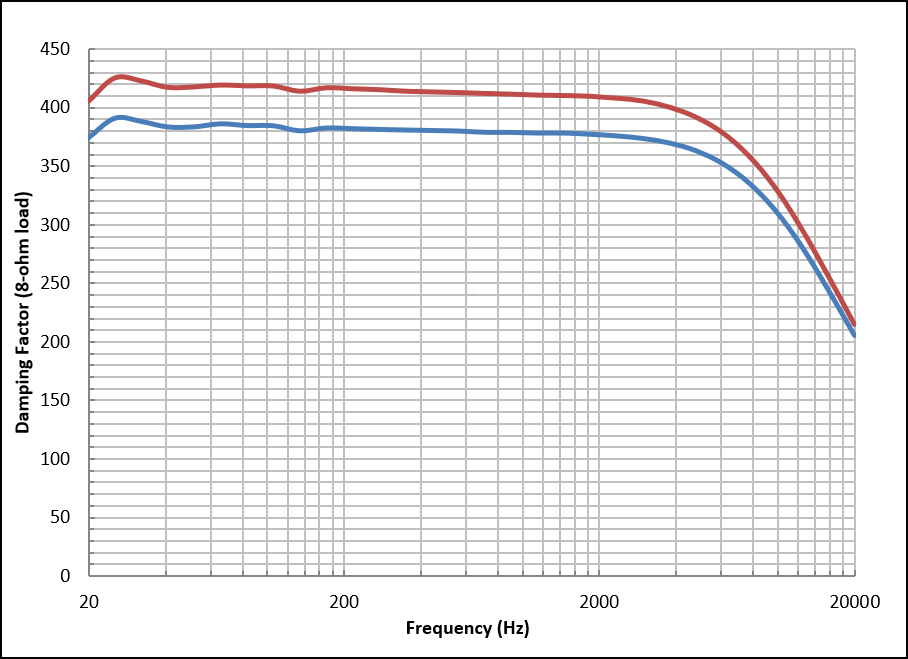