I measured the DB12 AAAMP using a Clio 10 FW audio analyzer. Note that my focus with these tests is on measurements that confirm these devices’ basic functionality. 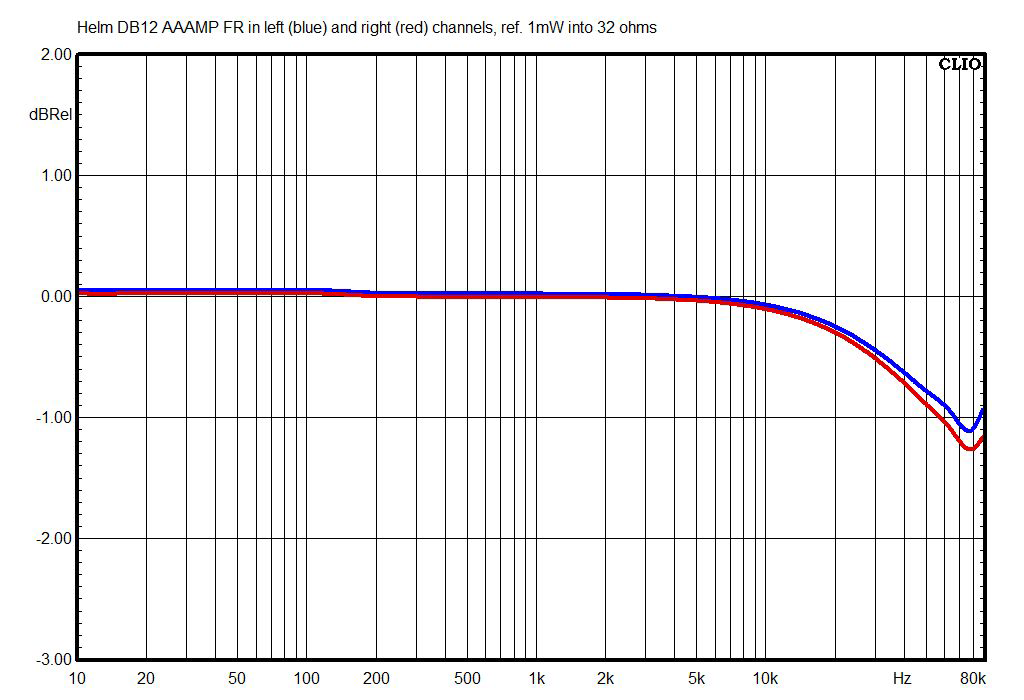 This chart shows the frequency response of the left and right channels at 1mW into a 32-ohm load, referenced to 1kHz. Channel matching is excellent, with the left just 0.012dB below the right at 1kHz. Response is dead flat down to 10Hz, -0.31dB at 20kHz, and -0.72dB at 40kHz. 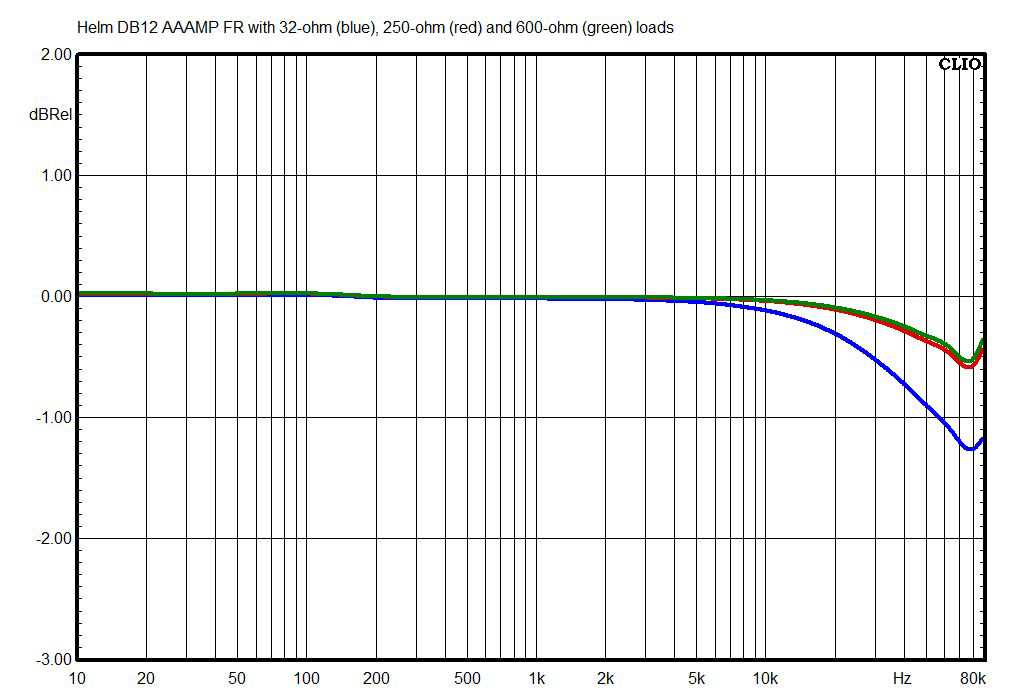 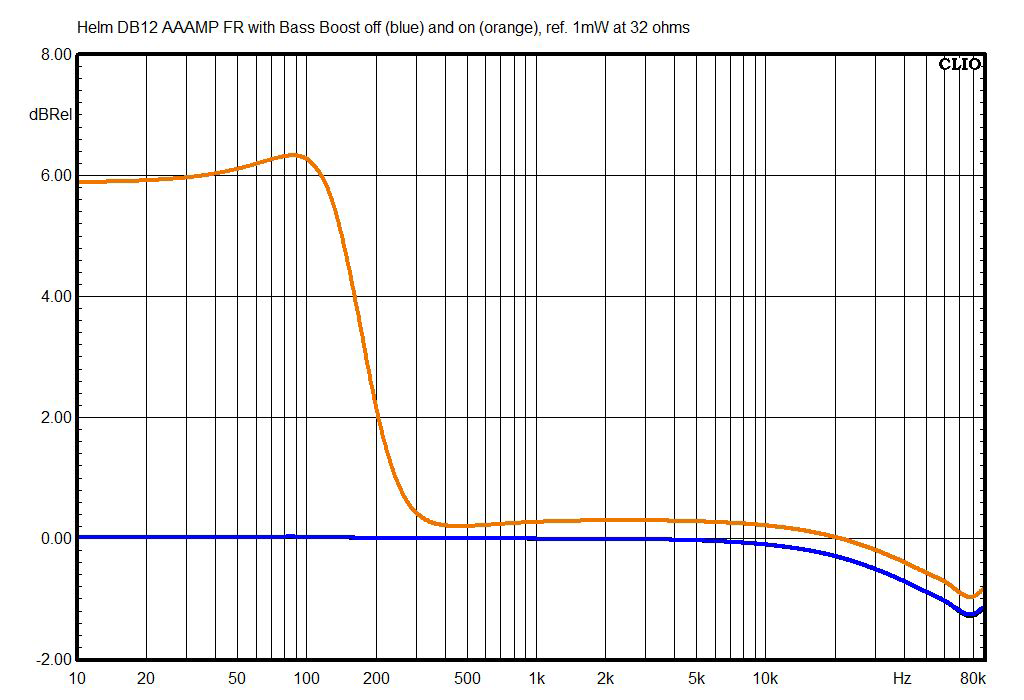 This chart shows the effect of the Bass Boost mode, measured with a 32-ohm load. This mode raises the volume slightly, by +0.27dB at 1kHz. With the volume normalized at 1kHz, the boost is +3dB at 176Hz and +6dB at 87Hz. Note that this is a shelving-type control; the boost has a slight resonant peak centered at 87Hz, but it more or less levels off below that. It also has no effect at frequencies above 300Hz, so it shouldn’t produce the upper-bass muddiness that many bass-boost functions exhibit. It’s obvious that whoever designed the Bass Boost mode put some thought and knowledge into it. 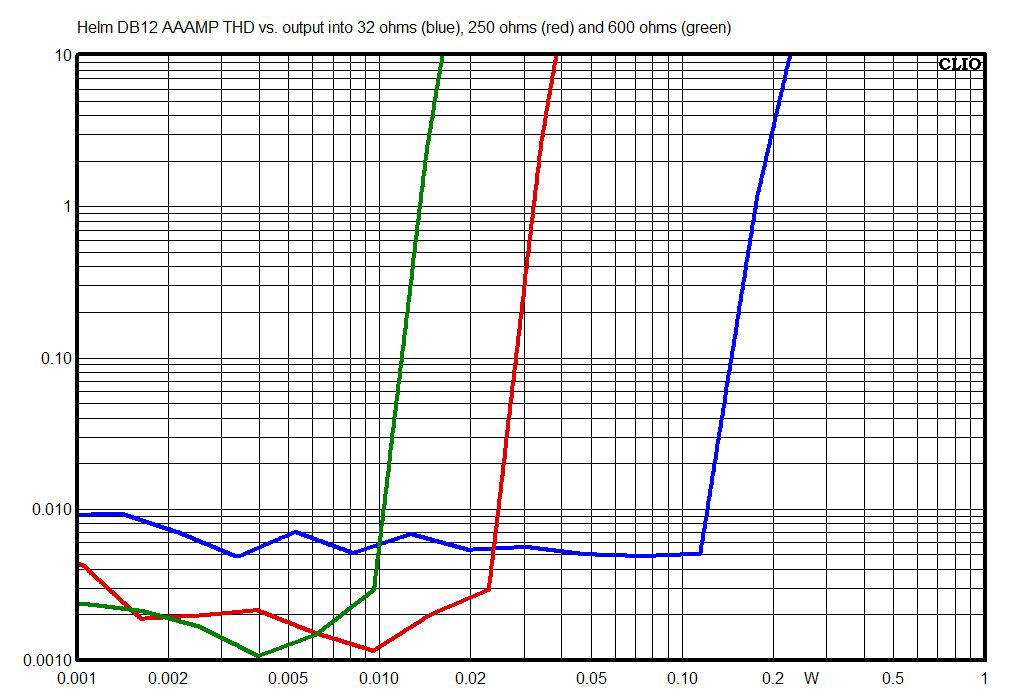 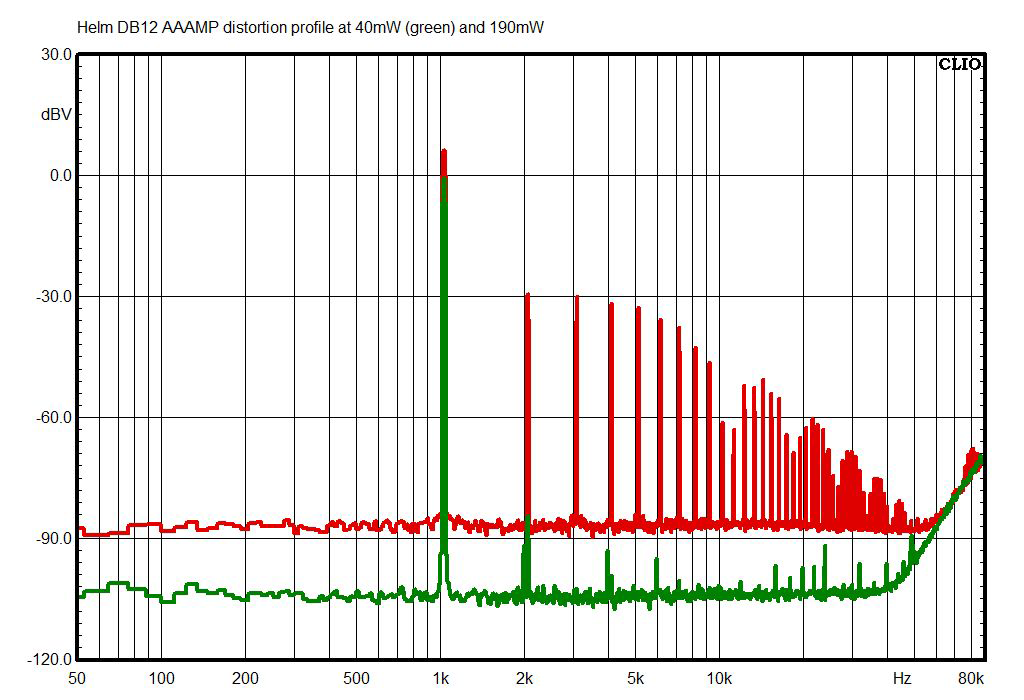 Here you can see the harmonic distortion spectrum and noise floor of the DB12 AAAMP. I’m showing two measurements because the profile at moderate power levels (such as the 40mW level shown in green) is interesting -- the amp seems to show a fairly consistent level of even-order (2nd harmonic, 4th harmonic, etc.) harmonic distortion. This is something we typically see in single-ended tube amps, and one reason that’s commonly given as to why audiophiles like them. Because the distortion occurs in even-numbered octaves above the fundamental, at moderate levels it can be heard as increasing the depth and density of the sound, rather than as a harsh distortion. That said, the loudest harmonic (the 2nd) is at -83.8dB relative to the fundamental, so you’d never hear it, but it does show something interesting is going on inside this amp. At full clipping (190mW, red trace), the odd- and even-numbered harmonics balance out, which is a more typical result.

Output impedance is rated at 0.3 ohms, frequency unspecified. At 1kHz, I measured 0.4 ohms. Thus, the DB12 AAAMP’s output impedance will have no audible effect on the response of your headphones or earphones. This little amp measures extremely well overall, as good as or better than specified.