So there I was, kneeling uncomfortably behind my audio rack, replacing one set of interconnect cables with another for what must have been the 50th time, when a truly evil thought crossed my mind. If I were the devil, and a very naughty audiophile (a "naughtiophile"?) were sent down to me for torment, I could think of few tortures more exquisite than damning that unfortunate soul to an eternity of cable swapping. Crawl behind rack, pull off cables, hook up cables, crawl out from behind rack, listen to reference tracks, repeat. I now understand, with that keen insight that inevitably develops following the seemingly endless repetition of this ritual, why certain leading magazines don't run wire reviews much anymore. The writers at SoundStage!, however, are more than willing to get down and dirty if it means bringing you the reader the information you need about a truly outstanding set of interconnect cables.

Kimber Kable has just launched its "Hero" line audio interconnects. Consisting of the Standard Hero and the upscale Hero-108 (a Hero-Balanced is also available), this new line, while not exactly cheap, is priced well within the budget of the average high-end consumer. Both single-ended Hero models share the same conductor, differing only in the model of connector: The Hero-108 features high quality, precision-machined, WBT-0108 RCA type connectors with a cold-welded connection while the standard Hero uses the less-fancy, soldered WBT-0144 model. These gold-plated, adjustable-barrel connectors are a particularly nice feature, allowing the user to attain super-tight connections without Herculean installation and removal efforts. As an added bonus, the cable between the connectors is quite flexible and should easily manage the twists and turns of most any audio setup. The Hero-108 retails at $170/1m pair while the standard Hero checks in at just $110. 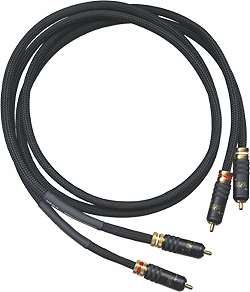 In "Kimber Speak," the Heroes are assembled using Varistrand® conductor geometry, GyroQuadratic field geometry, and Teflon®-based dielectics. Translated to plain English, the Heroes consist of four Teflon® coated copper wires of varying gauge braided in a particular geometric configuration. According to Kimber, the construction of this cable is designed to reduce signal and return/earth interaction as well as offering heightened immunity from RF and other types of EMI. Those hungry for additional technical details or interested in seeing phrases such as "field relational format possibilities," "interleaved polarity," "summed flux density," and "periodic ratios," used in actual sentences can click over to the Q & A portion of the Kimber Homepage [www.kimber.com] for further exploration of cable design theory.

As there is no universally recognized method of measuring the sonic performance of an interconnect or speaker wire, the cable review, perhaps more so than with any other system component, is necessarily a subjective event. Second, the sound of a given cable can vary to a greater or lesser degree from system to system, and a cable that sounds subjectively "good" with certain components can sound shaky with others. Third, the source materials can also dictate the sonic performance of the cables. If the recording suffers from a messy soundstage, treble hardness, or bloated bass, a pair of wires doing their job will pass these annoying characteristics on through to the preamp or amplifier. Keeping these factors in mind, I auditioned the Heroes with as many component combinations as practicable, using a host of source materials of varying quality ranging from rock to classical to jazz to reggae.

The people at Kimber suggest a 72 hour burn in period for the Hero before engaging in any critical listening, strongly encouraging the use of a tuner for this purpose as opposed to the various commercially available burn-in CD's. Following their advice, I set up my tuner to KCRW, an eclectic public radio station broadcasting out of Santa Monica, and "cooked" the Heroes for a good week. Due to some significant changes in my turntable setup during the review period, I did most of my critical listening with compact disks. Kimber sent me two 1-meter runs of the Hero-108's, which I installed between CD player and preamp as well as between preamp and amplifier. I did not mix and match interconnects from varying manufacturers, as I wanted to get a full, undiluted dose of the Hero effect.

So what was this Hero effect? Well, somewhat paradoxically, it wound up being both huge and virtually non-existent. The effect was huge in the sense that with the Heroes in the system, it sounded like much more sonic information passed from my CD player to my speakers. In addition to the macro details that even the cheapest interconnects can pass on more or less intact, the Heroes excelled at presenting the delicate micro details that distinguish the truly excellent systems from the merely adequate ones. With the Heroes, for example, I could pick out individual voices in the Danish National Radio Choir's absolutely mesmerizing recording of Henryk Gorecki's Miserere [Chandos 9523] much more easily than with other, lesser interconnects. The Heroes also excelled at conveying the sense of size of the venue or studio in which the recording was made as well as the sonic differences between those recording environments. Not surprisingly, a fuller presentation of this micro detail resulted in more convincing re-creations of the original sonic events.

The effect of the Heroes on my system was also virtually non-existent in the sense that these new Kimbers, more so than most sub-$500.00 cables I've come across, don't seem to impart much of any sonic signature on the signal passing through them. The Heroes offer a natural, neutral presentation, sounding full, open, and extended without glaring colorations to sweeten up or sharpen up the sound. As such, the rest of the components in the audio chain should be up to snuff because the Heroes will not mask sonic deficiencies in recordings or equipment. Those looking to, say, tame the digitized nasties from a lesser CD player might be better off looking elsewhere. Weak components have no place to hide with the Heroes in the house.

With high quality audio components in the playback chain, however, the Heroes demonstrate their true capabilities. Unexpectedly nimble given the detailed presentation, music played through these new Kimbers always maintained a lively sense of rhythm and pace. Bass sounded tight and tuneful, though in absolute terms, one could ask for a bit more heft and palpability through the lower registers and midrange. Dynamic contracts were handled deftly, lateral imaging was stable and widely spaced, and depth of image was more than adequate. Beyond that, it is hard to comment on the Heroes other than to say that they do an excellent job of not getting involved in "making" the music.

If it sounds like I'm raving a bit, I began to question myself as well after enjoying an uninterrupted month of the Heroes in my system. Were the cables really that good? As a reality check, I embarked upon the aforementioned cable-swapping program. Just for fun, and as a control test to see how much difference good interconnects can make in a system, I purchased two 1 meter pairs of Radio Shack shielded "Audio Patch Cables" [catalog # 42-2351], which cost me a whopping $3.99/pair. Working with the Radio Shack patch cables, the Kimber Heroes, and my reference Cardas Microtwins, I spent the next month of the review process substituting various cables in and out of the system, listening with a more restricted diet of source materials. Further narrowing the variables, while I had rotated three power amps in the system during the Hero-only phase, during my multi-cable experiments, I relied exclusively on the McCormack DNA 0.5, which was best at revealing the comparatively minute (but occasionally not so minute) differences between interconnects.

I began the cable comparisons with one of my current favorite reference disks, Dead Can Dance's Spiritchaser [4AD]. In order to establish some sort of sonic benchmark, I plugged in the Radio Shack patch cables, punched up with track # 8, entitled "Devorzhum," and settled into my standard listening position. Somewhat to my surprise, the sounds emanating from my speakers still sounded like music, albeit music conveyed in a noticeably different manner than I was used to. What initially seemed to be a clear, uncluttered presentation soon revealed itself to be cleanliness at the expense of detail and frequency extension. Music through the Radio Shack cables has a bleached, two-dimensional quality to it, like a color photograph left out in the sun for a week or two.

With the Cardas Cables in place, the essence of the music lacking with the Radio Shack cables became immediately apparent. Intellectually difficult though it may be to accept, switching from one set of wires to another absolutely affected the playback performance, and in this case very much for the better. The harmonic thinness present when the patch cables were in the system disappeared when I replaced them with the Cardas interconnects. The music, though matched in sound level, now featured higher highs, lower lows, and a richer, full bodied midrange.

The differences between the Microtwins and the Heroes, on the other hand, were a good deal more subtle. The Microtwins, while offering a more lush, liquid sonic presentation, tended to achieve this result at the expense of sonic detail. The Heroes, on the other hand, sounded altogether cleaner, tighter and more detailed, if not quite as smooth and liquid as the Cardas wire. As might be expected, transients had a good deal more "snap" with the Heroes than with the Cardas and Radioshack wire. They also sounded considerably more extended at both frequency extremes than the Radio Shack wire and slightly more so than the Cardas cables.

These general observations seemed to hold true no matter what disk I played. On Radiohead's "Paranoid Android," a marvelous track on their stunning OK Computer [Parlophone], the sound of someone whacking two wooden sticks together periodically emerges through the left channel. With the Radio Shack patch cables, the sticks are barely distinguishable in the mix and the bass degenerates into mushy, indistinct lumps of sound. After inserting the Microtwins, the bass tightened up considerably. Though the sticks were still somewhat obscured with the Cardas interconnects, singer Thom Yorke's voice, brittle through the Radioshack interconnect, now sounded noticeably smoother. With the Heroes, the sticks were more clearly distinguishable, the bass tightened up even further, and Yorke's voice developed a fragile, ethereal quality perfectly in keeping with the spirit of the song.

One ordinarily thinks of a "hero" as someone who overcomes terrible odds to achieve an overall good. In that context, I think that this latest line of interconnects from Kimber more than lives up to its lofty name. It cannot be easy to offer the level of detail and refinement presented by the Heroes at such a comparatively low price, but the folks at Kimber Kable have somehow managed to pull off this impressive feat.

Ultimately, as with all cabling decisions, the brand and model of cable chosen should ultimately depend on the present and anticipated future state of the prospective buyer's audio system. The Heroes strike me as an excellent choice for someone not interested in the "cable of the month club" mentality prevalent in certain quarters of the high end and/or not interested in spending considerable sums of money for subtle improvements in cable performance. I suspect that owners of Kimber Heroes will likely go through several source and amplification component upgrades before feeling a burning desire to upgrade their interconnects.

The Heroes are not the "be all and end all" of audio interconnects, and those with sufficient funds can certainly buy interconnects offering "more" of whatever tickles their particular audio fancies. What the Kimbers do offer, however, is a remarkably well balanced, neutral sound at a price that the audio everyman can afford. I will not presume to tell you what kind of interconnect cables to buy, but I will tell you what to audition. Provided that the rest of your components are ready to be revealed for what they truly are, the Heroes deserve a place on your interconnect audition short list.