"Be still Grasshopper, and you will learn"

Over the years I have used Mod Squad Tiptoes, German Acoustics Cones, Michael Green AudioPoints, Simply Physics Tone Cones, AudioQuest Sorbothane pucks, Audio Alchemy pucks and Larry Kass Ebony Pyramids under various pieces of equipment. While not going to the extent (extreme?) of my friend Doug Blackburn, I, obviously, believe that vibration control is essential to extracting everything a component has to offer. So, when Ron Hedrich of Marigo Labs asked if I wanted to review some of his Bear Feet isolation devices I said "I’m your guy, send ‘em over!." A couple of weeks later a rather sizable box, containing 5 sets of the Marigo Labs Bear Feet showed up. Even though my conversation with Ron had led me to believe that the Bear Feet were different than the standard cone, point or puck, what I was expecting and what I got were two completely different things. The Bear Feet look like nothing so much as a stack of those throwing stars the old TV show "Kung Fu" made popular. When a friend saw them he agreed with me and we quickly dubbed them the "Shuriken" feet. 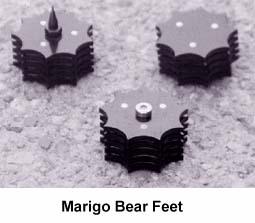 As you can see from the picture, these are unusual devices. Each Bear Foot is circular, with nine evenly spaced points around its circumference. At 2.5 inches across and 1 inch high they are larger than the standard cone or point as well. On one side the Foot is smooth while the other side has a hole drilled in the center of it, with a flat headed steel screw filling the hole and protruding about an eighth of an inch. The Foot is designed to be used with the screw in place when placed under components. For use under speakers, on carpeted surfaces, the screw can be removed and a spike put in its place. However, Ron says that for use under speakers on a wood floor or other solid surface you should forgo the spike and use the screw. Since my speakers rest on carpet I used the spikes. The final odd thing about the surface of the Feet are the three tiny brass cylinders, which run through the Feet.

Looking at a Bear Foot from the side only continues the unusualness. Each Foot is made up of alternating layers of two types of composite material. The first layer seems to be made of stiffer stuff than the second, but when I tried to compress the Feet by hand I was unable to do so. However, if you try to twist the Foot (I am not sure why you would want to, but as a dedicated and thorough reviewer I thought I had better give it a try) it rotates ever so slightly. All in all, quite unusual in appearance.

The Bear Feet are also unusual in execution. The instruction manual suggests that you use three Feet per component, with one Foot under the transformer and the other two distributed in the best locations to balance the component. While this is not abnormal, the manual also encourages you to experiment with "sides," suggesting that the best sound will be found when one of the Feet is inverted, relative to the others. Since there is no real top to the Feet, this means that the best sound will be found with either 1 or 2 of the steel screws pointing down, necessitating a great deal of experimentation. In addition, the manual suggests that rotating the individual feet can have a beneficial effect as well. Very unusual. Of course the real test is not what the manual says, but how they sound.

In my system, the sensitivity to footers is in the following order, most to least.

I have heard other systems where the source components are the most sensitive, but at here at Casa de Musica it almost always seems to run the other direction. As for the footers in use at the start of this review, the Dunlavy SC-III's were on top of German Acoustics cones. The Warner amp was resting on Michael Green AudioPoints, as was the Audible Illusions pre-amp. The Audio Alchemy DDE 3.0 was sitting on Larry Kass Ebony Pyramids, the JVC XL-Z1050 (used as a transport) on AudioQuest Sorbothane pucks and the DTI-Pro was perched on Simply Physics Tone Cones.

Rather than replacing 5 sets of footers at once, I eased the Bear Feet into the system, keeping all the existing feet in place, and using only one set of Bear Feet at a time. This helped to isolate the sound of the Bear Feet, since no other changes were made to the system.

Under both the DTI and JVC I found the effects of the Feet were slight, which is consistent with my previous experience using other cones, etc. Under the DAC things began to change a bit more. With the DDE 3.0 on Bear Feet there was a noticeable deepening and widening of the stage and a slight increase in instrumental texture and harmonic richness. I've got to admit to being surprised by this, since the Ebony Pyramids had been placed under the DAC because they excel at exactly those things.

Moving to the pre-amp, the Bear Feet once again bettered the performance of the existing cones. This time, besides slightly better spatial information, I heard a slight increase in dynamics as well. Under the Warner, the results were consistent with what I had heard under the pre-amp, as well as under the DAC. I noticed an increase in spatial information, harmonic bloom, macro dynamics, and an increase in micro-dynamics as well. These differences were not of the caliber of a component upgrade, but they were noticeable nonetheless. In fact, on occasion I run a small, in-house stereo test using my wife as the subject. To test the Bear Feet under the amp, I asked her to listen to an album she likes a lot, Sarah McLachlan's "Fumbling Towards Ecstasy." After about 15 minutes I arranged for her to leave the room. I then replaced the Marigo Bear Feet with the old cones. Even though she did not know anything had changed, when she came back she commented on a difference in sound quality. While she could not fully articulate what had changed, she clearly indicated that it was not for the better.

Moving on to the speakers, under the Dunlavy SC-III the Marigo Feet brought all their strengths to bear (sorry). John Dunlavy does not recommend points or cones under his speakers, and while I usually find myself agreeing with what John says, this time I must disagree. The Marigo Bear Feet were a superb match for the SC-III's. The bass took on an even higher degree of resolution and drive. Staging was both deeper and wider. Harmonic texture and resolution went from 7th Heaven to Cloud 9 or beyond. Even the dynamic shadings of this superb speaker were augmented.

"Everybody was Kung Fu fighting"

After I had run a single set of the Bear Feet through the system I placed a set under each of the speakers, a set under the amp, the pre-amp and a final set under the DAC to see what a fully Marigo'ed system would sound like. As you can guess, it was wonderful. Stage width seemed to increase by 10% or more, and depth by an equal amount. Bass was tauter and deeper, and more harmonically rich as well. Treble was slightly smoother, with more of an analog feel. I found that music had a more relaxed and involving sound that made long listening sessions enjoyable. In short, a very nice improvement.

Okay, here’s the hard part. The Bear Feet, while effective, are not cheap. In fact, at $300 a set, 5 sets will ding you for $1500. Was the improvement worth that much? Put another way, should I spend my next $1500 on feet, or would that money be better used on a new transport? In my case, $1500 might be better used on a new transport. But under the SC-III’s the Bear Feet were a perfect match, clearly bettering any other feet I have tried. So, were the gains under the SC-III's worth $600? Without a doubt! These really are exceptional, if expensive devices. My advice to you is find a set or two of Bear Feet and try them under each of your components. After you have, you'll know exactly how many sets you'll need.