First things first: the name Joule Electra may sound peculiar or exotic, but it has sensible origins. A joule is a unit of electrical energy, and Electra is the middle name of Joule Electra's vice president, Marianne Barber. Joule Electra's president (and the vice president's husband), Jud Barber, began designing and building audio gear in the early 50s, when tubes were the only game in town. With the introduction of the transistor, Barber stopped designing tube-based equipment to concentrate on creating solid-state designs, the simplest of which measured magnitudes better than his most sophisticated tube designs. You can probably imagine the rest of the story. After a number of years, Barber, as well as much of the audio world, turned back to tubes, discovering that stellar measurements did not help create the illusion of live music.

Nowadays Joule Electra's entire line uses tubes--but not just any tubes. With most equipment, NOS tubes are an after-market purchase, but Joule Electra uses them to begin with because, according to Barber, they just sound better than the 100 or so currently produced dual-triodes that he's tried from 15 different manufacturers. Barber is a committed tubeoholic, and when he finds a tube whose sound he loves, he tracks down stocks of them to use in his products. While some manufacturers of tube equipment stay away from NOS tubes because of the naturally limited supply, Joule Electra believes in using what's best and not leaving the experimentation to customers. 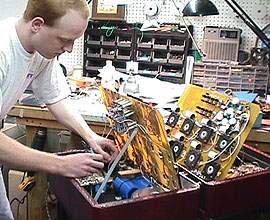 Barber makes no pretense about his design philosophy: he creates by ear, choosing internal parts based on how they sound in the circuit at hand and not on cost or pedigree. Regarding circuits, Barber believes--as most designers do--that simple is best, and so his designs adhere to a few straightforward rules. He eschews the use of solder traces in favor of point-to-point wiring--even in his preamplifier and phonostage with their many small resistors, capacitors and other components. All of Barber's circuits are inverted, again for the sake of sonic simplicity, and his amplifiers are all single-ended triode OTL designs. This may make them more complex for the human mind to comprehend, but they're simpler in the electrical world of signal transfer.

Joule Electra's product line is quite robust. The LA-100 Mk III is a full-function remote-controlled preamp ($4895) that can be ordered without the standard Gold Aero phono board and remote for less money ($3295) or with gold knobs, 14-caret gold lettering and a different model designation--LA-200 Mk III--for more money ($5595). With either model, the buyer gets to choose the internal hookup wire used, either Cardas six-nines copper or Purist silver, and this makes wonderful sense given that the units are hard-wired anyway. The VZN-100 Mk III ($8895 per pair) and VZN-160 Mk III ($11,000 per pair) monoblocks both use the now-vogue 6C33 output tubes, as does the VZN-80 Mk III ($6595) stereo amplifier. Barber's latest creation is the OPS-2 ($3495), an outboard phonostage with separate power supply that's Barber's assault on the state of the art.

The LA-100 Mk III linestage looks simple--a piano-black face plate adding a touch of elegance. Inside, though, it's a different story: dual Noble potentiometers, MIT caps, Holco resistors, point-to-point wiring, and, of course, NOS tubes. The LA-100 Mk III's circuit topology is called a Mu follower (insert bovine joke here), which according to Barber is so old it's new again, having first been developed over 40 years ago. However, even with the Mu follower's considerable heritage, the original LA-100 was the first commercial product to use this topology. The system board is mounted on Joule Electra's proprietary Tri-Flex suspension system, which uses state-of-the-art materials like EAR vibration bushings and Iso-damp sheets, to protect the board from micro-vibration and feedback and thus improve the sound. A novel battery-powered adjustable bias circuit ensures that pure DC is on the signal grids of the gain stage, and this is responsible for a good amount of the LA-100 Mk III's particular sound. The linestage version of the LA-100 Mk III has four sets of direct inputs--the input selector being the only switch in the signal path--and two sets of outputs, all sturdy Cardas RCA jacks. 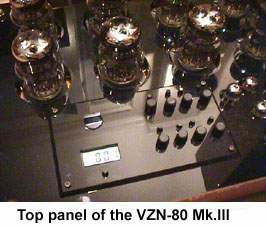 The VZN-80 Mk III is a unique amplifier--for a number of reasons. Unlike essentially all other pieces of audio equipment, the VZN-80 Mk III has a chassis that's made from highly polished acrylic and MDF, not aluminum or steel. I'm sure this has some sonic advantages, but the most apparent characteristic is the stunning reflective top plate, which is especially lovely when the eight tri-nippled 6C33 tubes are fired up. In addition, it is the only amplifier I know of that comes with its own variac. Essentially an outboard power supply for the amplifier, the variac controls line voltage, allowing the user to keep it stable at around 86 volts, the optimal figure for the amplifier. Like the LA-100 Mk III, the VZN-80 Mk III utilizes the Mu follower topology, this time in the driver stage. The circuit is biased in full class A, delivering 80 and 50 watts into 8-ohm and 4-ohm loads respectively. The amplifier draws over 500 watts at idle, and with all of those large tubes--the 6C33s are shaped like pint-sized mason jars--the VZN-80 Mk III can provide considerable heat. Unlike OTL amps of yore, the VZN-80 Mk III is fully fuse-protected, so if any of its tubes throws a tantrum, your speakers won't get paddled for it. You can order the VZN-80 Mk III, or any of the other Joule Electra amplifiers, in a wide array of colors, not just the standard black or silver.

DC bias, point-to-point wiring, single-ended triode, OTL, class A: Joule Electra's gear is a veritable glossary of sexy audio terminology. But what's just as impressive to me is the hand-built nature of the equipment. This is certainly due to the amount of care that Jud and Marianne put into their work as well as the nature of the products themselves. One glance at the underside of a Joule Electra circuit board will tell you that there's no chance that this gear can be mass produced. There's also a homespun element to Joule Electra equipment, from the hand-cut pieces of foam used for packing to the names of the most popular colors for the amplifiers: forest green and wineberry. And talking with Jud and Marianne is like talking to your neighbors. I can just imagine the tenor of the conversation I'd have with them over the back fence: the weather, home-grown tomatoes, and NOS tubes.

I'll be spreading the sonic gossip of Joule Electra's equipment in the coming weeks. Y'all come back now, hear?