No SoundStage! review that I've written has generated as much email response as my review of the Merlin VSM loudspeakers. As I've come to discover, there are quite a few vocal owners of the VSMs who wanted to send me words of agreement with my very positive assessment of the speakers. There are also a number of people who've heard the VSMs at a high-end audio show, where Merlin is famous for providing great sound, and so were interested in finding out more about the speakers. This review will be of interest to both groups because it discusses the new Special Edition version of the VSMs and the innovations that Merlin has developed to further refine the sound of their already-well-received top-of the-line speakers.

The VSM-SEs cost $5950, or $1450 more than the standard VSMs, but they don't differ physically from their less-expensive relatives, using the same high-quality drivers, binding posts, internal wiring and the like. The SEs, however, add a resistance circuit wired in series in the high-frequency network of the speakers as well as new inductors developed by Hovland, who manufactures high-quality internal parts used in many high-end products. The new inductors--which Merlin's Bobby Palkovic reports are as big as sausages and very costly to produce--exhibit qualities that make them ideal for use in the crossover networks of the VSM-SEs. They have very low ESR (equivalent series resistance) and high power handling, and they're extremely linear in operation. Electrically, the new inductors help the VSM-SEs achieve vastly lower distortion with less phase shift, and the resistance circuit minimizes ringing in the high-frequency network -- both notable improvements for any high-end speaker design. 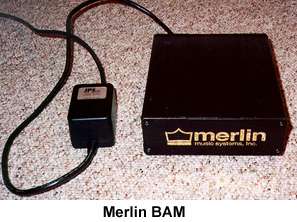 In addition to the resistance circuit and new inductors, the VSM-SEs include the Merlin BAM outboard bass-alignment module. A joint effort, the BAM was developed by Merlin along with cable manufacturer JPS Labs, whose Golden Flutes have been augmenting the bass of many speaker models for nearly 10 years. The BAM reportedly extends the usable low-frequency response of the VSMs by 10 Hz, lowering their -4 dB point from 37 Hz to 30 Hz with no alteration to the rest of the speaker's frequency response or musical characteristics. Perhaps more important, however, is the BAM's ability to remove subsonic hash from the signal, and this, according to Palkovic, cleans up the bass of the speakers, making it as well as the frequencies above sound "more organic." The BAM has the same level of exceptional internal parts found in the VSM-SEs themselves, further ensuring that the qualities of the speakers will not be adversely affected. The BAM is inserted in the signal path between preamp and power amp or in any suitable tape loop. (You'll need an extra pair of interconnects to hook up the BAM in either configuration.) Although the BAM is an outboard device and can be purchased separately for $850, it's provided as standard equipment for the VSM-SEs.

Of course, these changes wouldn't be deemed improvements if the VSM-SEs weren't better than their cheaper relatives or if the SEs were hurt sonically in any way, but neither of these is the case. The VSM-SEs are very special indeed. The smooth treble extension of the standard VSMs--their real achievement in my opinion--is presented through the SEs with greater presence and verisimilitude. Images have greater roundness and fullness because the treble is even more natural. In comparison only, the treble of the standard VSMs sounds a tad wispy--which it's not in any absolute way. It just sounds this way next to lilting highs of the SEs. In my review of the VSMs, I shed light on Diana Krall's wonderful All For You, and through the VSM-SEs, this CD is pure magic. Krall's voice is sweet throughout, slightly breathy in strategic spots, languid, lithe, and real. I love this CD, especially with the lights off, and the VSM-SEs just nail it all, making All For You an audio experience of the highest order. (The music's great too.)

The soundstage of the SEs is even deeper than that of the standard VSMs--if that's possible--and every nook and cranny is populated with musically significant detail. This is certainly due to the first-rate base design of the speakers as well as their ability to melt into the music they re-create. I love the way my Timbre TT-1 DAC can hunt down and expose the most minuscule bits of detail and present them naturally, and with the VSM-SEs the Timbre has met its match in this regard. Joshua Judges Ruth is my favorite Lyle Lovett CD--and this says a lot because all of his work is supremely interesting. Through the VSM-SEs, the choral arrangements of "Church" filled the back half of my room--distinct voices everywhere--and near the beginning of "North Dakota," the individual notes of the piano decay for multiple seconds, even as the next note begins. Credit the Timbre for digging up the minutiae, but VSM-SEs are responsible for bringin' it on home.

There are noticeable gains in the bass, which is now more competitive with that of larger speakers. The BAM's influence makes for an increase in weight and punch. Suzanne Vega's Nine Objects of Desire has been living in my transport since I bought it, and its bass is prominent through the VSM-SEs--as it should be. I also had some sublime fun playing my Telarc CDs of Bach's organ works through the SEs, and the growl from the 32-foot pipes was audible and tactile. Although the bass of the SEs still doesn't compete with that of my reference ProAc Response 4s, which should come as no great surprise, it's more meaty than that of the VSMs, making the whole package even stiffer competition for mega-buck offerings from other companies.

So the SEs have made some strides forward in important areas. However, in the end the most remarkable aspect of the SEs' new whizbang innovations is the way the speakers retain all of the best characteristics of the standard VSMs (which Merlin will still offer). They have the VSMs' wonderfully balanced treble, world-class midrange transparency, and ability to disappear into the music. And of course the VSM-SEs don't require megawattage to drive them because of their 90 dB efficiency--and they love tubes! What more could a self-respecting audiophile ask for -- and expect to get -- in a sub-$6000 package?

Thus I hereby declare the Merlin VSM-SEs to be an unqualified success -- all gain and no pain. In an industry where nearly imperceptible increases in performance can cost big bucks, the VSM-SEs, at a 25% premium over the standard VSMs, offer a level of improvement that's easily commensurate with the added cost. In fact, Merlin reports that dealers who have both speakers on hand have noted even greater amounts of improvement than I mention here, so maybe my aural memory leaves something to be desired (or some dealers are prone to hyperbole--naaaahhhh). In any case, the VSM-SEs make a strong argument for the design paradigm of refining known principles--and for not spending more than their price for state-of-the-art speakers.