As recently as a few years ago, I was a skeptic. Line conditioners made sense to me, but add-on power cords didn't. If the wiring in your house is not of audiophile grade, if the wiring all the way back to the power plant isn't, how can that last few feet make a difference? I can't quote chapter and verse from the electrical engineer's bible, but I can speculate that the power cord can not only carry the electricity but also block those things that rob reproduced music of its realness. A power cord filters right before the juice is squeezed into the component, straining out all of the seeds and most of the pulp. (You gotta have a little pulp in your juice, or it's not juice. Am I right or am I wrong?)

Here's a test that you can do at home--one that changed my mind: replace your stock power cords with ones made specifically for high-end audio gear--perhaps cords you've read about in SoundStage! or elsewhere--and then listen. I did, and I haven't gone back since, although I'm not ready to proclaim that any add-on power cord will improve the sound of your system. In fact, I've heard an expensive cord or two that made little or no difference. I believe, but I'm willing to trust my ears more than exotic claims and high prices.

To ease the suspense, the API Power Link power cords that I've been using for the past few months definitely do not fall into the category of expensive audio fakes--both because they're not all that expensive ($159 per six-foot cord) and because they make clearly audible improvements. And they're made by the people who should know how to design a power cord, the gang at Audio Power Industries, makers of the illustrious and sensible Power Wedge line of line conditioners. 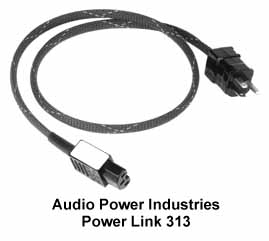 According to API guy Les Edelberg, the primary goal of all API products, from Power Wedge to Power Link, is to lower the noise floor of the system in which they're used. In API's world view, the very small and subtle signals present in recordings contribute greatly to such large-scale effects as soundstage width and depth as well as the realistic definition of musical detail. When the noise floor masks such signals, the three-dimensional illusion is reduced and the soundstage collapses <gasp>.

Where does this noise come from? Some is generated by external sources--electric motors, dimmer switches and the like--but a good deal of it comes from your components themselves. Line conditioners like the Power Wedge can filter the power before the outside noise hits your system as well as deal with the goop floating around among your components. However, because the ground leg is essentially the common link that all components share, addressing any noise in it is vitally important, and this is what the Power Link cords do. What API has developed is a way of minimizing "coupling" noise that's generated because of the close proximity of the hot, neutral and ground wires in a power cord. This is done through design, construction and materials (none of which API wants to divulge completely), ultimately reducing the amount of noise that your entire system shares.

Both models of the API Power Link cords--one for standard 15-amp use, and another for special 20-amp applications--use Hubbell plugs and Oheil IEC connectors. Both of these make serious contact with the wall or component, nearly as good as that of the Marigo RMX Reference Ultra cords I reviewed a few months ago. The Power Links are constructed of mil-spec silver-plated copper conductors that are insulated with Teflon and then covered with a UL-approved mesh outer jacket for added protection and good looks. One nice byproduct of the cords' construction is their thickness--or lack thereof. They can easily be snaked behind your components and routed away from your interconnects and other power cords.

I used the API Power Link cords with a wide array of components--both as part of my base reference system and as I moved other review products in and out. Thus they were used along with ProAc Response 4 speakers, Quicksilver M135 and Clayton M70 amps, CAT SL-1 Signature linestage, Timbre TT-1 DAC, Wadia 20 transport, JPS Labs speaker cables and interconnects, Merlin VSM Gen. 3 R/C speakers, Marigo digital cable and power cords, Lamm M1.1 monoblocks, Mesa Baron amplifier, Audio Magic Illusion cables and Tubed Interconnect, and anything else I may have forgotten. I plugged the power cords at various times into either a Chang ISO 9600 line conditioner or a Marigo RMX Reference AC Distribution Center. The CAT linestage and Timbre DAC were always plugged directly into the wall.

The Sound of Silence

In almost every instance where we--reviewers and consumers--evaluate the sonic merits of a component, we rely on listening impressions, subjective evaluations of the sound we hear, to help us form our opinions. After all, there's no test for midrange bloom, no ruler to measure soundstage width and depth. In terms of the API cords, however, there is a test that can produce somewhat quantifiable results. With your current complement of power cords in place and your system on, put your ear up to the tweeter of your speaker and note the loudness and character of the hiss and buzz you hear. Do the same thing at the woofer to determine if any 60-Hz hum is present. Then replace your cords with the API Power Links and take the same informal measurements. Do you hear a difference?

I've done this experiment at least a half-dozen times since the API cords arrived--mostly because I couldn't believe that the noise would actually decrease, but it did. The hiss from the tweeter was softer with the API cords in use and of a higher pitch; and the hum--which was slight to begin with--was gone, even though I hadn't floated the ground on any component. I will concede that my system with the CAT Signature and its uncommonly high gain makes this an easy exercise to perform. But I wouldn't be surprised if you were surprised by the decrease in your system's noise too.

This is not just an academic exercise, though. What this decrease in noise translates into is a blacker background--the instruments emerging with a more natural kind of clarity, quickly and with impact. There were slight but perceptible increases in speed and transparency, but more noteworthy was a greater sense of placidity--sort of what my system sounds like after it's been cooking all night for an early-morning listening session. Very cool.

This overall increase in calmness and silence was present with every recording, but I'll spotlight a few just because they sounded especially delightful. James Carter's Conversin' with the Elders is musically diverse and sonically wonderful--Carter's sax being sweet and real in each of the musical backdrops. I also enjoyed Shack-man by Medeski, Martin and Wood, a recording that has a wonderful combination of low-end weight and tonal ease--and quirky tuneage, dudes. Both of these are good fun, and both made me lose track of the equipment, and time, while the API Power Links were in my system.

Another specialty of the Power Links is increased delicacy and ease. My system, packed with tubes as it is, doesn't sound intrinsically harsh in any way, but the API cords added another level of sonic good humor. Questionable and downright poor recordings didn't have the same edge to them. Stuff like Smashing Pumpkins' Mellon Collie and the Infinite Sadness and Wayne Kramer's The Hard Stuff (I'm sure you have your own list of discs that need a lot of tough love) were simply more listenable, and this is never a liability when your collection is like mine--populated with poor recordings that you just can't live without. I can imagine certain systems in which the special qualities of the API Power Links would be required to gracefully tame unruly treble or push back a bit of creeping forwardness.

More Power to You

Let me blatantly state the obvious: high-end audio equipment is expensive, and if you believe everything we reviewers report, you just can't live with the simplest of systems. You have to accessorize with special cables and stands and other goodies that will increase your sonic pleasure--and send you to the poor house. In absolute terms, the Marigo Ultra cords that I reviewed a few months ago are more airy and dynamic than the API Power Link cords. But our systems are not built on absolutes, and thus I can imagine that some listeners will prefer the API cords' version of the musical truth--one that stresses delicacy and quietude. And if you factor price into the equation, the Power Links are especially attractive.

It's nearly impossible to get every listener to agree upon the virtue of a particular product, but the API Power Links have to come darn close. They do wonderful things for your system, and they're cheap enough that you won't feel stupid for spending "how much?" on power cords. I bought five Power Links to outfit my whole system, so I guess this review is also testimonial. Give 'em a try, eh?