Two Months with Marigo, Part I: The Hunger for Power

What's your reputation? Hopefully it has nothing to do with the amount of money you spent on your "stereo." The reputation of Marigo Audio Labs is one built on the definitive strength of their products--a few in particular. The VTS tuning dots are one of Marigo's best-known products, and although I haven't tried them, a couple of audiophiles in whose ears I trust think they're standard equipment for any true high-end system. In addition, the Marigo digital cables and power cords are reputed to be among the very best available regardless of price--not bad at all for the ol' reputation.

Marigo power cords come in three flavors: RMX Gen. 3, RMX Reference C Prime, and RMX Reference Ultra. As you may have guessed, the Ultra ($575 for a six-foot length) is the king of the hill--the cord that pushes the envelope (10"x12.5", no clasp) for design, materials, sonics, and unfortunately price. The Reference C Prime and RMX Gen. 3 cords include design elements and materials found in their more expensive relative, but they cost less, $349 and $195 per six-foot length respectively. Because the Ultra is Marigo's all-out attempt at making the best power cord available, I offered to review it (OK, I begged) along with Marigo's Apparition Reference Series 3 digital cable. This month, the power cords take center (Sound)stage, while next month I'll spill some pixels on the digital cable, eh? 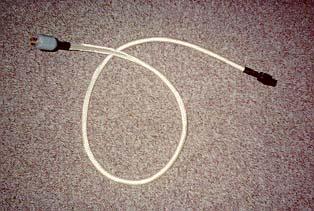 What's involved in developing and then manufacturing a high-end power cord? Judging by what Ron Hedrich, Marigo's Grand Pubah, told me, a lot more than you might think. First and foremost is the goal, which in the case of the RMX Reference Ultra is lofty to say the least. Hedrich wanted to create a power cord that would do what the Marigo line conditioners do but without the electronics--the caps, coils and other sundry components. This means that the cords should not only filter out audio bad boys RFI and EMI as the power comes in, but also perform broad-band filtering of the power-line hash that all equipment spews back into the line, contaminating the other components. Digital equipment is public enemy number one in this regard, but Hedrich believes that all other equipment throws around its dirty laundry as well. So Hedrich wanted to create a power cord that would work both ways--coming and going, surf and turf.

The materials used in the RMX Ultra are impressive. The conductors are of solid-core OFHC copper, each surrounded by a PVC dielectric of specific diameter to provide a precise level of damping to the conductors. Around the conductors is a PVC sheath that's impregnated with graphite in a proprietary process. Its purpose is to help absorb power-line and airborne hash-- ward off marauding, music-hating invaders. Then come the nuts and cherry (and sprinkles if you want): a heavy-gauge OFHC braided silver shield followed by an outer PVC braided jacket to further deflect stray electrical garbage. Both the pins on the IEC connector and the plug itself are gold-plated, although in the IEC's case, they're also silver-plated under the gold. As you might guess, the Ultras are substantial--thick and very heavy--and do they make a connection with the socket!

The Marigo RMX Ultras were used in my regular old reference setup: ProAc Response 4 speakers driven by either Quicksilver M135 or Clayton Audio M70 mono amps. A CAT SL-1 Signature linestage catches the fastballs of a Timbre TT-1 DAC, which gets its signs from a Wadia 20 transport. Cables throughout are the wonderful JPS Labs Superconductors.

I used Tara Labs Affinity power cords with upgraded Marinco copper plugs on the CAT and Timbre DAC, both of these going straight into 20-amp dedicated outlets per their designers' explicit instructions, which, as you'll read, we reviewers always follow (as a starting point at least). I used an Audioquest AC-12 power cord on the transport and a pair of the Marigo RMX Ultras on my amps. The transport and amps were then plugged into a Lightspeed CLS9600 ISO line conditioner. Unfortunately, there were not enough outlets to try everything directly into the wall, but fortunately the Lightspeed is exceedingly neutral and never leaves a soapy sonic residue.

Power cords are especially tricky to evaluate. After all, they don't carry signal and you get one with every piece of equipment you buy, so why spend more money on something you already have? Because you're an audiophile, and you want better sound of course--which a change from the stock cords that came with your gear will deliver.

What kind of improvements can you expect? For the most part, none as profound as those you'd get by replacing a piece of equipment--and this is a good thing. At the point where you're considering replacement power cords, you've already bought your equipment and you just want to further enhance its intrinsic capabilities. And you're in luck because this is exactly what good power cords will do. It's your equipment, only better: purer tones, less of a mechanical tinge to the music, less grunge--or more grunge if that's your musical thing. Like ferrite cores at the downstream ends of your digital cables (you have tried these, haven't you?), power cords do their work right before the juice enters your nice clean amp or preamp. They're sort of like an audiophile doormat on which de dirty feet are viped, no?

The Marigo RMX Ultra cords, which I used exclusively on my Quicksilver M135 and Clayton M70 monoblocks, are splendid--or I should say that the amps are even more musically satisfying with the Marigo cords feeding them. The music has more clarity and impact--not HUGE leaps in either case, but gains that are distinctly audible. I also find that the background is blacker, the instruments emerging from silence with a more natural sense of speed, like they do in life. Listen to Keb' Mo's first CD: he has the quintessential voice for a bluesman, suave and expressive with a hint of raspiness--character. The perfectness of his voice is even more apparent with the Marigo cords in place, although it's not something you'll readily pick up on if it's not already there to some degree without them. Sorry.

For a short time I was able to compare directly the Marigo RMX Ultras to a pair of Synergistic Research A/C Master Coupler power cords--another substantial artery of audio lifeblood. The Master Couplers had an ever-so-slight softening effect, adding a smidgen of warm fuzziness to my amps. I preferred the Ultras, but the Master Couplers are by no means slouches. In fact, there are abundant similarities in the sound that both cords helped produce, and this makes me wonder, given the small but apparent sonic difference, which cord is delivering purer power. As always, vote with your dollars.

So, did you catch it, the flaw in my reviewing methodology? If the Marigo RMX Ultras were designed as substitutes for a line conditioner, and I used them only on my amps which were always plugged into a Lightspeed CLS9600 ISO, would I fully appreciate what the cords can do? I sent Ron Hedrich a pre-publication copy of this review--essentially everything you've read up to this point with a slightly different conclusion--and he caught my error in a nanosecond. He politely suggested that I move the cords from the amps to other pieces of equipment that were bypassing the line conditioner. He further recommended that I use the two RMX Ultra cords I had on hand with my DAC and transport--the vitally important source components. So, after I thought I had already finished the review, a good old-fashioned cord swappin' ensued. I put the Tara Affinity cords on the amps, the Audioquest AC-12 on the CAT, and the RMX Ultras on the Timbre and Wadia. Let this be a remi! nder t hat reviewing audio equipment is not always fun.

"I'm the pickiest audiophile I know," Hedrich said to me at one point during our regrouping conversation. And it's a good thing because his recommendations increased the easy resolution of my system even more. After I moved the power cords, the music had a greater sense of being unleashed from its recorded limitations, everything from Cyrus Chesnut's Earth Stories to The Presidents of the United States of America sounding more airy and alive. It also seemed--and I know there's no logical foundation for this--that my system was more powerful, dynamics being nearly unrestricted. I know these impressions couldn't be measured, and I'm still dumbfounded as to why they weren't present to the same wonderful degree when the cords were coming out of the line conditioner, but there was no mistaking the overall effect: the music was even closer to the real thing.

A few of the recordings I listened to during the re-review period were especially noteworthy. Danilo Perez's graceful piano on his CD Panamonk had a luster that was captivating. The individual notes just hung in the air and then decayed naturally, without constriction or bluntness. As equally impressive--but for different reasons--was Greg Brown's Further In, a CD you can enjoy because it will increase your emotional literacy (gulp!) and make your system sound great. Brown has a voice that's warm and languid--a combination that can make a tube-heavy system like mine sound too relaxed. Even though they were used the second time around on solid-state gear, the RMX Ultras helped bring all of Brown's phrasing and nuance through and even assisted with his stage lighting. Used as their designer intended, the Marigo RMX Ultras are easily the finest power cords I've had in my system.

Yes, I'm happy that Ron Hedrich set me straight, and when he offered to send me three more RMX Ultras and an Apparition Reference A/C Power Center (with its own integral RMX Ultra power cord) so that I could really hear what his cords can do, I just couldn't refuse--in the name of better reviewing, of course. Look for a follow-up on a screen near you.

One of the many great things about the Internet is the way that subjects can be quickly volleyed about by a number of participants. A recent thread on RAO (rec.audio.opinion) asked the eternal question, "Are $500 power cords worth it?" My answer? Yes, if you have the money and care to spend it on something that will further squeeze performance out of your system. Well, the Marigo RMX Ultras are almost $600 each, and in my opinion they're worth their lofty price. They made music reproduced with my system more enjoyable--more real--and given their materials and build, their price seems positively sane, especially in comparison to the prices of other statement high-end products.

If you own a system that you're not completely at ease with, for whatever musical reason, you'd be unwise to spend a substantial amount of money on power cords. Upgrade your equipment first, and then optimize it. If, on the other hand, you have just what you want, give the Marigo RMX Ultra power cords a listen. Your time, and probably your money, will be well spent.