Reviewing audio equipment is never a chore, but reviewing interconnects and speaker cables comes dangerously close to being dull. Why? No knobs or lights, cosmetics are essentially non-existent, and above all, the best cables have no character of their own--zero, zip, zilch. I know some audiophiles use their cables for passive equalization, but what you and I really want from our wire of choice is nothing. Poor cables do their work indiscriminately, snipping a little here, adding a touch there--mortal sins in my book. Inspirational audio thought of the day: Let your equipment do the work.

Which brings me to this month's subject: cables from JPS Labs. Who? Where have I heard that name? For over a half-dozen years, JPS Labs has been designing and manufacturing bass alignment filters for various speakers, most notably the venerable B&W 801s, and quietly advertising their wares in the back of Stereophile, amongst the used-equipment ads. These filters, called Golden Flutes, are nifty: utterly neutral, made of the finest components, and housed in handsome and electronically significant brass casings--hence the name. What do they do? Extend and tighten bass, align it properly with the rest of the frequency spectrum. I mention the Golden Flutes to give you an idea of the pedigree of the JPS Labs interconnects, speaker cables, and digital cables--all given the princely moniker Superconductor. They're the products of a company with a reputation for doing nothing--that is, to the signal itself. 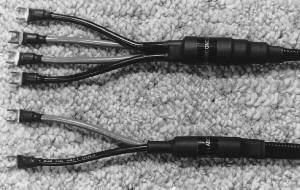 The JPS Labs cables are unique in a number of ways, and the most noteworthy of these is the conductor itself: not silver, not copper (although it factors into the mix) but rather aluminum coated heavily with high-purity copper. This conductor cocktail is then shielded fully by a high-purity corrugated copper tube, which functions as the return leg. Around all of this is a black vinyl casing of unknown properties--and thus, refreshingly, no audiophile claims will be made for it.

The conductor is approximately 14 gauge, and the same wire is used for both the interconnects and speaker cables, the latter of which uses two twisted runs. The digital cable has the same geometry, but it employs a smaller conductor, approximately 18 gauge. So when you wire up with JPS Labs Superconductor cables, you're really using the same wire throughout your system. 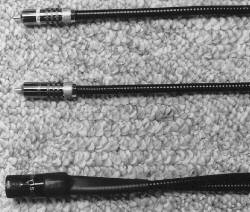 JPS Labs cables use high-quality peripheral parts, like locking WBT-style RCAs and heavy gold-plated spades (which were especially welcome because they fit easily over the thicker-than-normal binding posts on the Clayton Audio M-70 monoblocks). Taken as a set and viewed with aesthetics and value in mind, the JPS Labs cables are top-shelf--well constructed (much better than some cables with more recognizable names), burned in before shipment, and packaged in silvery NASA-approved (at least I think they'd approve) anti-static bags that purportedly lock in freshness, electrically speaking.

What most impresses me about these cables is the soundness of the electrical data--their measurements. According to JPS Labs, all of their cables sport capacitance measurements in the hundred-billionth part, with equally impressive inductance and resistance figures. Huh? In short, cables that measure with so many zeros immediately behind the decimal point should pull a world-class disappearing act. Their price is impressive too: $229 per meter pair for the interconnects, $199 for a one-meter digital cable, and $900 for an eight-foot pair of speaker cables. Why are the speaker cables so much more? Two runs of the same wire, with bi-wire configuration and your choice of terminations adding, again, nothing to the cost.

And what of their sound? Poof!

If you're a regular reader of Soundstage!, you've probably noticed the steady increase in the number of reviews published each month. We've noticed a rapid increase in our monthly hit count--many thousands of new readers visit us monthly and we're constantly growing--and of course we see a connection between the two. It's good to be the only game in cyberspace, and when manufacturers of new or little-known products approach us, we're especially anxious to give their wares a once-over and hopefully spill the beans on a wonderful product or two--often before the print publications.

Such is the case with the JPS Labs Superconductor cables, which I've been gleefully using for the past few months. They're a real find--and not just because they sound exceedingly invisible. They're also dirt cheap given their level of performance and created by a man I've genuinely enjoyed conversing with, both for his insight and amiability, Joe Skubinski--the J and S (and I suspect P) of JPS Labs.

But it's the cables that deserve the praise here--lots of praise.

The JPS Labs cables--interconnects, bi-wire speaker cables and coax-to-BNC digital cable--lived for the review period in my reference setup: ProAc Response 4 speakers driven by Quicksilver M135 and Clayton M70 mono amps (not at the same time, silly). Preamplification is courtesy of the suave CAT SL-1 Signature (not a Mark II model, which I've heard and found to be nearly identical to my unit, new tubes being the greatest source of difference). Digital? What else? The mah-vel-ous Timbre TT-1 DAC and Wadia 20 transport combo. The Timbre and CAT go strait into 20-amp hospital-grade outlets, dedicated that is, while the amps and transport plug into a Lightspeed 9600ISO conditioner, which goes into another 20-amp job. Power cords were my reference Tara Affinity, with a pair of Marigo RMX Reference cords arriving right before Thanksgiving.

Although Joe does a yeoman's job burning in his cables, I found them to need a good 50 hours of play to really begin to deliver. Before this it all sounded a bit tizzy--although the digital cable was a gem right out of its cool anti-static ziplock baggie, which all of the cables come in.

And clarity: at once you'll hear greater clarity after you install the JPS Labs cables. Many metaphors and much audio terminology apply, but none of this is as effective as putting on a favorite disc and hearing it reproduced faithfully by the equipment you thought long and hard about buying. With the JPS Labs cables, it takes much less effort to hear the delicate, characteristic tick of drum stick on cymbal. Electrified music benefits especially--guitars sounding more alive, and the subtle changes in a singer's breathing being very noticeable.

I wrote this part of the review late one night as I listened to Joshua Redman's Spirit of the Moment: Live at the Village Vanguard, and believe me, it was tough going. Redman's sax on "My One and Only Love" floated effortlessly between the big ProAcs and waaaaaaay back (I bet my neighbors couldn't sleep through the glorious noise out in the yard). Now I'm not going to say that the cabling was the sole cause of this audio chill, but I know I've never experienced such an elemental reaction to as much music as I have since the JPS Labs cables were installed. They just appear to disappear--letting, in my case, the grace and beauty of all those tubes shine through. A more right-minded recommendation I can't give.

For a long period of time before the JPS Labs wire arrived I had been using Tara Labs RSC Master generation II (say that II times fast) interconnects and speaker cables--darlings of the audio press and audio buyers that they are. In comparison to the JPS Labs cables, the fine Tara wire sounded a bit colored--adding purr to bass lines and generally enhancing presence. If you're dissatisfied with your system in these areas, by all means look into the Tara RSC cables. With my equipment--and this includes both the Quicksilver and Clayton amps--I preferred the supreme invisibility of the JPS Labs cables hands down.

You just had to know that audio-guy Grant would rear his head in this review--I believe in spreading the wealth around. In addition to his definitive command of the species amplifierous solid-staticus, Grant knows his wire--having had many, many sets of cable through his system. Grant's reference was the FMS Microwave line--terrific cables I discovered after using them while Grant borrowed the JPS Labs review set, which I never got back. That's right--Grant still has them, although I have the set he subsequently bought. It being so close to Christmas, I didn't have the heart to take them from him. You just had to see the smile on his face....

Grant's assessment? He finds the smoothness to be the most endearing quality--although I would argue that it's his equipment that's so smooth. The cables just wave it on through. We both agree, however, that no cable either of us has tried (pick a name, any name) can supply as much detail and nuance as the JPS Labs cables--and not in some phoney, exaggerated way.

My feelings are clear, no? These JPS Labs cables are the real deal. They're far more transparent than any other cable I've tried and are able to deliver all the music your equipment has to offer. If you're about to buy something else and haven't listened to the JPS Labs stuff, you're potentially throwing your money away. What's more, the JPS Labs cables put a huge wrench into the price-performance ratio. They killed my almost-double-the-price Tara RSC Master rig, and Grant dumped his very expensive FMS cable for the JPS. I'm still wondering how Joe does it. His cables offer nothing, and in this give you everything you'll ever want.