This is sort of a "lite" month for me--audio-wise. I'm about to move into a new dedicated listening room (notice how completely I identify with my system), so this isn't the ideal time to take delivery of a pair of monoblock amps for review. But hey, I'm tough and can improvise. So this month--no music, no opinions, just a pre-review preview.

The CES and Stereophile shows are not just where the big boys of the audio world show off. They're also the industry's coming-out parties, where new companies present themselves and their wares, often to a buzz of fanfare. Clayton Audio is just such a company. Their amplifiers (stereo and monoblocks) were shown and heard for the first time at the most recent Stereophile show--and now we at Soundstage! are proud to be the first publication to review the top-of-the-line M70 monoblocks and report on their sound to the music-lovin' world.

Clayton Audio is the creation of retired engineer and company President Wilson Shen, formerly of IBM, and John Nye, Associate Professor of Economics at Washington University in St. Louis and company spokesman, marketing director, and Veep. The two met via their wives, introduced as "stereo-crazy types" ("In numbers comes acceptance"--Ancient audio proverb). Both loved music, and Shen had dabbled in hi-fi design since his days as a student. Over the years, Shen built various amplifiers, including one that was water (!) cooled. Shen took early retirement and then decided to turn his love of music into his retirement pastime--and went into the audio business.

From the beginning, Shen wanted to focus on class-A designs, believing that they yield inherently superior sound. He also believed that high power output was not as important as high current--and the number of speaker designs that present sub 8-ohm loads makes this a necessity. Thus, both Clayton models run in pure class A, and the stereo amp can theoretically produce 100-amp peaks--the monos 200-amp peaks. Welding anyone?

Both Shen and Nye believe in voicing equipment with classical music. This, in their opinion, is the best source material for determining the real sound of instruments in space. The Clayton amps were developed with a wide range of ancillary electronics, both tube and solid state, and with speakers from Martin-Logan to Thiel. The Clayton sound, as expressed by Nye, is smooth and effortless, with plenty of natural detail and power. To quote: "Refinement and expressiveness are essential to us." Amen, brother.

The M70 monoblocks are handsome--all black and shoe-box shaped. Thus they are easy to place, as together they take up little more room than a single stereo amp. The heat sinks run along the top and help the amps run relatively cool, even with their class-A biasing. In the neat-features department, the M70s include a high/low bias switch that allows you to leave the amps on and save some money on your power bill. The Claytons utilize high-grade parts, like WBT binding posts and RCA jacks, internal wire by Straightwire and DH Labs, and new Motorola bipolar transistors that are chiefly responsible for the amps', uh, amps. The M70s list at $4800 a pair, while the S40’s list is $2800. You can call Clayton Audio at (314) 862-6017 for further information on the amps as well as factory-direct pricing with 30-day return privileges. Overall fit and finish are commensurate with other products at this price point--very good.

The sound? Well, in a nutshell...you'll have to wait until next month. Trust me: I’m anxious too.

Marc Mickelson's full review on the Clayton M-70 Amplifiers will be on-line next month! 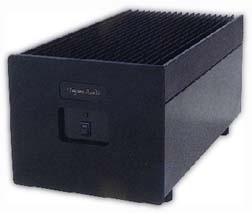 To recap our saga thus far: in early July I took delivery of a pair of Clayton Audio M70 mono amplifiers--even though I had no speakers or room in which to house my audio menagerie. I explained this to John Nye, the Clayton Audio jack-of-all-trades, and suggested I lend the amps to an audiophile friend of mine for break in and initial evaluation until I was up and running. He agreed.

This was the second act of bravery that Clayton Audio had displayed; the first was sending a pair of their solid state amps to me, a card-carrying tube dude. Nye was unshaken. "We know you'll like them," he said. We'll see, I thought, and sent them with my friend Grant, who was glad to do the dirty work.

Grant is a keen-eared music lover, and an expert on solid state amps. He's heard them all: the best from Krell, Levinson, Classe (the big names) as well as many others. He owns a pair of Symphonic Line RG 4 monos (the BEST bass I've ever heard) and at the time the Claytons arrived, he was contemplating the purchase of a pair of Essence Emerald monoblocks with cases made of Corian, a marble-like material used primarily for kitchen countertops. I value Grant's opinions greatly, especially because he's very critical--almost impossible to please.

Grant called immediately after he had the Claytons hooked up. "Edgy, hard, very unmusical," was his estimation, not surprising given that the amps hadn't been run in at the factory. Then, after a day's use, "much better" and "at least listenable." Then, after two days of constant running, "Wow, very liquid, not a trace of grain or edge. Highly musical, better than anything except for the Essence monos" (which cost more than double).

I figured this would be it--sub-$5000 monoblocks that justify their price. But then Grant called again.

"I have to talk with John Nye."
"Why?" I asked. I figured the amps had blown up and taken Grant's Aerial 10Ts with them.
"These amps are incredible."
"Better than the Essence monos?"
"Different. In some ways much better."

Waiting for the Sun

So I now have the Claytons in my new listening room and hooked up to a pair of ProAc Response 4s, which are of absolute reference quality. I'll certainly have more to say about these speakers as they break in, but they're wonderful right out of their sizable crates and way beautiful--my pair's in yew with at least 20 knots and a cool crab-like grain pattern on their sides. The rest of the equipment lineup is the same as it ever was: Timbre TT-1 DAC, Wadia 20 transport, and CAT Signature preamp.

I won't use more space to recap the Claytons' cosmetics or build--take a look at last month's column for details. I have much to say about the Claytons' sound however. They've made me believe that solid state can sing.

The Clayton M70 monoblocks embody the highest of audio virtues: they readily make you forget about them. They excel at recreating the heart of the music and thus make talk of their sound unimportant. This does not mean that the standard audio lexicon doesn't apply. The Claytons have extended treble and bass, are detailed but not etched, are wonderfully accurate components. What they are not is sterile--the term I would use to describe most of the solid state amps I've had in my system. The Claytons let you hear it all, but they always serve the music, not some oscilloscope's idea of what music should sound like.

The Claytons are not amps that cater to certain kinds of music. John Nye told me that all of the Clayton amps were voiced with classical music, but the M70s do their thing with rock, jazz, blues, grundge--anything. In succession one afternoon and evening I played, and greatly enjoyed, The Rollins Band's Weight, Emmy Lou Harris's Wrecking Ball, Guy Clark's Boats to Build, Chris Whitley's Din of Esctasy, and Paula Cole's Harbinger. If all of these CDs don't ring a bell, trust me when I say that this is a diverse group, and only the Guy Clark CD is worthy of audiophile status. I'm used to feeling irritated by solid state amps--no exceptions--but the Claytons just had me wanting to put on more and more music. This is due to their treble, which is world-class, lacking in grain and glare, but not the least bit veiled. I hear it all, but nothing is forced at me.

This is no small point. I believe there is a valid criticism to the way digital reproduces treble--sometimes hard, often fatiguing. The best components cure this disease but never obscure information and thus get in the way of the music. Most tube amps do the deed--and so do the Claytons. They also give you deeper, tighter bass than any tube amp I've heard and will never make you think you're missing something.

But what about those tubes? The logical comparison for the Claytons is the Quicksilver M135 monos--logical because they're the only other amps I've had on hand (manufacturers: wink wink, nudge nudge). I love the M135s' supreme liquidity and presence, but these come at the expense of ultimate realism. I wouldn't have known this, however, if it weren't for the Claytons, which in comparison are more resolving. The Quicksilvers are impressionistic, the Claytons, uh, more Kodak-istic. I'd love to own them both, and I will miss the Claytons when (if) they go. In fact, I'd love to hear what two pairs do to my ProAcs (John Nye: wink wink, nudge nudge).

Who won't like the Claytons? The Accuracy crowd (capitalization theirs, ahem) expresses a distaste for classic tube sound, but then these same people seem to feel the need to evangelize at every turn, as if to convince themselves that their systems, no matter how unpleasant they sound, are right. Tubeophiles, on the other hand, talk of musicality but secretly wonder if they're hearing it all (or so I'm told). The Claytons will charm both camps, and not because they embody the best of solid state and tubes. They go beyond such simplicity--to make the music sound right. The ultimate test for a component: put on a poorly recorded CD or LP of music you like (Todd Snider's Songs for the Daily Planet, Wanderlust's Prize, the soundtrack from Mo' Better Blues), the stuff you reserve for play in your boombox or car. If you turn it off quickly, move on. If you play it through, the component in question has passed. The Claytons passed on their first ! try--and are still looking for real challenges.

Glowingly positive reviews are problematic for reviewers. Write too many and you risk losing your credibility--after all, everything can't be the best. This said, the Clayton M70 monos, like the Timbre TT-1 DAC, are magnificent. They pair smoothness and punch, and deliver the heart of the music along with its visceral impact. They are incredibly balanced, exaggerating no part of the audio spectrum, and above all make you forget that they exist. Clayton is just now creating a dealer network, so you may have some problems in the short run obtaining audition samples. Be patient, or call Clayton to order a pair factory direct. You'll have 30-day return privileges and get a pair of amps that sound far better than they should at their price (or double)--music to anyone's ears.