It's nice to be able to review a product this special. Special because it reinforces my belief that the British make the best stereo equipment in the world. Don't get me wrong - I'm not saying that other countries don't make good, even great "audio" gear, but for long term satisfaction, nothing says music like something from England. And the Exposure gear I've been listening to lately is certainly special. A big part of what makes it special is the way it shares the musical qualities normally associated with Brit labels like Linn and Naim, while delivering sonic attributes they don't.

I'm not trying to put Linn and Naim down. Far from it. These two brands seem to be the ones frustrated audiophiles retire on and take to their graves. In fact, one thing I hoped to find by reviewing Exposure was this kind of closure myself, so I could retire (somewhat) from this quixotic quest and concentrate on other details, like planning a family or something like that.

My quest to find retirement electronics started a while back when I couldn't for the life of me understand what this whole musicality thing was all about. I just couldn't get a handle on musicality versus accuracy. Apparently this difference is something you realize only when it hits you like a ton of bricks. No one can explain it to you, even if you are surrounded by it (Does this sound familiar?). Eventually the day came when I "got it." I suddenly realized what everyone was talking about when describing musicality. What had made it difficult for me to grasp was that everyone had been describing it in the two-dimensional terms we use to describe sonics. But, musicality is like a third dimension which can't be described using visual or aural references. That said, I still believe sonics play a more important role in the sense of musicality than many others do.

Take Linn. An easy target for sure. I can think of no other brand that has such a love it or hate it reputation in the high-end world. Linn sure doesn't make my short list when its dealers blindly proclaim in unison "The soundstage is artificial anyway, and if the speakers ain't setup balls to the wall it ain't makin' music." (That is, until you enter the adjacent room with the Levinson/Wilson setup.) In retrospect though, Linn setups have always allowed me to hear a lot of subtlety and contrast in the music that only top flight tube setups seem capable of. They have a very tight and clean upper bass too. Otherwise, they come across as clinical and lifeless to the point of being boring. For me, no emotion means no music. And good luck matching Linn pieces with other component brands.

Naim is pretty new to me, in fact, I've yet to set foot in a Naim dealership. My main experience with Naim is listening to fellow SoundStage! contributor Craig Schilling's system, which includes Naim separates and a Naim CD player. After hearing several speaker models come and go at Craig's place, I can say he has narrowed his search for an optimum speaker match rather quickly. He is getting more out of his recently acquired Epos ES-12's than I thought they were capable of. Much of the credit goes to the Naim electronics. Lifeless they are not. The Naim/Epos combo has a tight sound with a clear and articulate midrange and a surprisingly smooth bass. Naim doesn't seem to be as clean or detailed as Linn overall, but all the emotion is intact. Maybe a good contrast would be that Naim is music, while Linn is musicianship. I'd go with Naim. (DAS adds...I have never seen any people swear more by their equipment than Naim owners. As a matter of fact, they make me jealous! Most Naim owners claim that it simply does not get any better, musically, than a complete rig. Isn't that the result we are all after?) 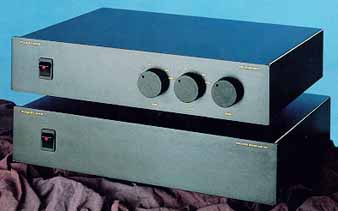 The last of the big three Brit lines is Exposure. For this review, I had the 18 Super amplifier and 19 preamp. Each is 17.25 inches wide, by 3.5 high and 12 inches deep. The on/off switch is a large rocker on the left side of the faceplate. The pre-amp has 3 control knobs on the right, a volume control, a source select (6 line level choices) and a tape select. Basic black is the color of choice. The 18 Super is rated at 75 watts per channel into 8 ohms and their literature claims that they will "drive all but the most insensitive speakers available regardless of their impedance."

Exposure believes that XLR's are better connectors than RCA's and so the pre has an XLR output and the amp an XLR input in addition to the standard RCA jacks. Keep in mind that neither component is balanced, but that Exposure just feels the XLR is a better connector. As for amp to speaker connections, the 18 Super has 2 sets of banana only outputs per channel. This allows for easy bi-wiring, at least if you have banana equipped wire.

The Exposure sound shares many common traits with Naim. In fact, I was able to insert both Exposure components in Craig's system for a few days to make some quick comparisons. I thought both sounded nearly identical, except for some extra warmth in the upper bass from the Exposures that affected the lower mids (the kind of problem that a better cable match could fix). Craig was surprised by the similarities and said he'd be happy with Exposures in his system.

Back at my place, I discovered that my Proac Response 1S loudspeakers don't do exceptionally well with the Exposures. No big surprise, since all my experiences with Proacs show they virtually cry out for tube amps. Nevertheless, the Exposures invoked their personalities and took control of the Proac 1S. The bass became detailed and smooth, the mids cleared up significantly allowing vocals to become more articulate. Everything got tightened up. And there was an actual soundstage, with good separation of the instruments within it, although the rear corners collapsed compared to using the Proacs with my Golden Tube SE-40 amp. Images weren't as fleshed out as I was used to, and the overall image size was slightly smaller than before. Still, a pretty good visual soundstage presentation.

I was able to borrow Craig's Epos ES-11's, which was the previous speaker Craig had been using. And then things came to life. With the Epos's, the 18 and 19 are simply music making machines. There was this seamless coherency from the mid bass through the lower highs that allowed everything to come through as clear as a bell. I don't think I could ask for much more. In this area the Exposure/Epos combo really embarrassed the Proac/Golden Tube setup, even though the Proac/Golden tube combo had a more palpable midrange. The Exposure/Epos sound was very dynamic, both of the macro and micro variety. I had a much more spacious sound than I heard in Craig's place, more due to a difference in speaker placement in our respective rooms. (Craig recently repositioned his ES-12s for a much wider spread, so things aren't so different now.) Compared to the Exposure/Proac combo, the soundstage presentation was slightly more transparent into the rear of the stage and the corners widened up again, even though the depth of the soundstage was shallower.

The Epos/Exposure combo was obviously an excellent match. On the down side, the highs weren't as detailed and effortless as with the Proacs, and the bass on the ES-11s was a bit flat sounding. I could just imagine how much better the ES-12s would have sounded.

This leads me to explaining why I won't be purchasing any Exposure components -- just yet. I, personally, would need to do some serious research on matching speakers with the 18 Super amplifier. My Proacs don't work well, and the Epos is a good choice, but I'd like to try some more brands out before committing to anything. Since Exposure hasn't been a widely reviewed brand and since there are not a large number of dealers in the U.S., I wouldn't expect too many preconceived ideas on brands to try out. I know Todd Warnke has the Exposures in-house now and will no doubt try to match them with the Platinum Studio 1's he reviewed in May. Now THAT could be an ass-kicking combination.

Another problem is with the limitations of speaker cables one can use with the 18 Super amplifier. Apparently the design of all Exposure amps require cables that have both a high capacitance and high inductance. Exposure supplied their own cables for the review, but neither the interconnect nor the speaker cable were to my liking in my system. Anticipating any problems like this, I borrowed a bi-wire set of Kimber 8TC. The Kimber worked better than the Exposure cable, but I think I could still do a lot better if I had more time. And to make things worse, the speaker terminals on the Model 18 accept only banana pins. No one in England is making this easy for me, that's for sure. Maybe Todd will have better luck.

So, while I haven't found my retirement system yet, this experience has still taught me a lot and has helped me narrow my focus towards that end. It's possible this mythical (?) "system" will include some Exposure components, perhaps even the new Exposure CD player that SoundStage! is expecting in for review soon. The good news is there may actually be an end in sight to this after all these years. I can't afford to let it go on forever.