Silver, some say, is the best conductor to use in audio cables. They base this on the fact that silver has superior electrical conductivity to copper. Others dismiss this notion by saying that the conductivity differences are negligible, particularly in the audio range. And then there are others who feel that while the conductor material is obviously important, the geometry, construction, and other factors have significant effects as well.

Compared to copper, silver is more expensive and finds its way into some (but not all) of the most expensive cables on the market. Stager Silver Solid interconnects are made of pure silver, but can be bought, in audiophile terms, at the bargain price of $100 per meter terminated. The company behind the interconnects is Stager Sound Systems, based in New York City. Marc Stager, who runs the company, sells direct to the consumer and uses word of mouth and the Internet as his primary marketing vehicles. No doubt, this helps him keep the prices very reasonable and the quality of construction and components high.

I consider myself lucky these days because I get a lot of cables coming in and out of my door to do comparisons with. They usually stick around for a number of months, which allows popping them in and out of my system at will. As a result, I have learned a considerable amount about cable differences - real, supposed, and otherwise When people ask me about cables I have a common piece of advice that I like to pass on to them. I tell them to round up some of the best, and preferably the most expensive, cables that they can beg, borrow and just short of steal. Make sure to get at least three sets. Then I tell them to listen to them all for as long as they can. I recommend at least a week or so but try for longer if at all possible. Once the best cable has been determined from this group, take it an compare it to the LEAST expensive, well-regarded cable that can be found. See if it is STILL as impressive.

I have found that spending mucho dollars on cables does not guarantee superior performance. The characteristics of the components that the cable is connecting have an enormous effect on the sonic result of using that cable. In other words, standard results are not guaranteed. As well, the differences between cables, despite the marketing hype and ravings, are sometimes not as large as some would have you believe. There are differences at times, but I rarely find them to be night and day as is often described.

When a new speaker or interconnect cable comes into my house, regardless of price, they first get compared to the DH Labs Silver Sonic BL-1 interconnect and T-14 speaker cable. DH Labs makes high performing cables at bargain prices. They are my budget reference. Their construction is stranded copper with silver plating on each strand. The BL-1 interconnect is $99 per meter; the T-14 speaker cable is $104 per 8 foot pair terminated in spades. If the cable I am assessing does not outperform the DH Labs cables, then that is where the comparison stops (unless there is some sort of component interaction problem).

Next, I put those cables under audition up against the Nirvana Audio SL-1 interconnect (at $695 per meter) and the SL-1 speaker wire ($1295 per 8 foot pair). These are a Litz design using high-purity copper conductors. I find the performance of the Nirvana cables to be outstanding and use them as my personal cost-no-object reference. Other cables have entered my system and produced splendid results, however, no other cable has entered my system and bettered the overall performance of the Nirvana wire. To my ears, it just doesn't get much better than this in wire-world..

Further comparisons are normally done with other cables that happen to be lying around the house. Depending on what is laying on the floor, it can usually vary widely in price. It is from these tests that I have learned that price is not always indicative of performance. Cables are more about synergy between components. It can also be a bit of a crapshoot, frankly, which requires some patience in matching the proper cables to components. 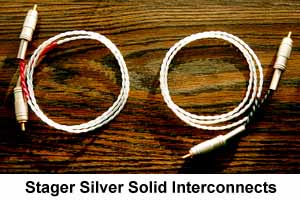 The Stager Silver Solids have no fancy jackets, mystery boxes, or otherworldly devices attached. Everything is visible to the naked eye. You can also read the sheet that Stager supplies to find out that each of the Stager Silver Solids interconnects are based on a twisted pair of high purity, solid core, 20 gauge silver wire. Each wire is wrapped in Teflon insulation. The terminations are Canare F9 RCA connectors.

Another high-end cable manufacturer visiting my house to drop off some of his wares picked up the Stager interconnects, examined them closely, and then asked the price. "A hundred bucks Ew-Ess," I replied. "Hmmm," he said as his head nodded forward, "at this price, this is the best way to go. They should beat a lot of cables." I was intrigued!

One thing to keep in mind when considering interconnects is shielding. The Stager is an unshielded cable. Some feel that having no shield can yield better sonic performance. In fact, there are cables on the market that are available in shielded and unshielded versions and in many cases the unshielded version is deemed superior. However, unshielded cables are susceptible to noise which depends largely on the environment they are being used in. I have not experienced this problem in my system with any unshielded cable I have tried, but it is worth noting and it is another reason why one should try before you buy.

My system is comprised of a Theta Data Basic transport linked by the Nirvana Audio Transmission Digital cable to a Theta Prime II DAC. I use a Blue Circle BC-3 preamp and a Classe Fifteen amplifier. Speakers during this time included the Merlin TSM, B&W 803 Series 2, and Coincident Speaker Technology Conquest. The wire length from the DAC to the preamp is one meter. Three-meter lengths are run from the preamp to the amplifier.

One very attractive feature of the Stager interconnects is that they are thin, light, and flexible. Unlike some of the unwieldy cables that act as if they have a life of their own, installing the Stagers is a snap.

In comparison to the DH Labs BL-1 interconnect, the Stager Silver Solids have a more lively sound in my system. Contributing to this is an impression of greater high-frequency extension. Extended highs (and sometimes bright highs) are trademarks of many silver designs. The Stager interconnects were not bright, there simply seemed to be more energy up top than with the DH Labs. If a system tended toward brightness this may exaggerate it, however, I did not find brightness to be a problem in my system. On the contrary, I favored the Stagers in this regard and found them to be airier as a result.

The midrange through the Stagers was very clean and with a fuller sound than the DH Labs. This was one aspect to the Stager interconnects that I really enjoyed. Vocalists were rendered with excellent clarity and definition. The BL-1 also has excellent detail, however, not quite the see-through transparency and the weight of the Stager wire. The full, natural, and clean sounding midrange is a strong point of the Stager cable that I will elaborate on more in a bit..

Bass performance favored the DH Labs. Each cable provided deep and full-sounding bass, however, the Stager sounded slightly looser with less detail, particularly in the upper bass region. It was a little more bloated sounding, whereas the DH Labs seemed to show more refinement and detail. At this point, however, I want to stress that the differences I am describing are very subtle and took a lot of time and patience swapping the cables back and forth to get a handle on. Through casual listening the differences were not that apparent (although the high frequency extension was easy to identify right off). All in all, each cable is a strong performer with subtle differences that warrants audition of each.

Next came the Nirvana comparisons. The midrange through the Stager again proved excellent and gave the Nirvana a run for the money. This is saying a lot! Midrange performance is a Nirvana strong-point that endeared me to this wire. The fact that the Stagers were so close speaks highly for the Silver Solid interconnects. In the end I favored the Nirvana midrange, but only slightly. If it were a contest it would be closer to a tossup. In any event, Jewel, Sarah, and Margo never sounded so good than with either of these wires.

In the high-frequency area I gave the nod to the Nirvana. The Stager interconnects were again showing excellent extension, but sounded slightly forward in comparison. The Nirvana sounded a notch cleaner and more defined. The bass performance through the Nirvana cable was also decidedly superior to both the Stager and the DH Labs interconnect by displaying greater detail and control. Furthermore, there is also an improved sense of coherence and remarkable sense of ease that the Nirvana imparts that I find few cables can duplicate.

All too often I have read and heard about enormous differences between cables. Frankly, I rarely hear what I will call major differences. Instead, I hear subtle and meaningful differences that can justify the cost of some high priced cables in a good system. Keep in mind, however, what one normally finds with much higher priced products is better performance that succumbs to the Law of Diminishing Returns.

So is it necessary to spend the amount on cables that some people do? That depends on quite a few things such as how much better it really sounds in your system, how much weight you give to the improvement, and in the end, how much money you can afford to pay. And that is really the point here. The Stager interconnects sound simply fantastic and come very close to their much higher priced counterparts in many aspects of their performance than many would probably like you to believe. Furthermore, they are a fraction of the price! Mix, match, and most importantly, listen for yourself is the best piece of advice I can give.

The Stager Silver Solids stuck around the house for quite some time before I shipped them off to John Stafford. They are that good so I wanted the true budget-man's point of view (followup review by John will be upcoming in SoundStage! ). What the Stager cables deliver for $100 is, in audiophile terms, outstanding value, and a must audition for anyone looking at either bargain or higher priced cables. Like the DH Labs cables, the Stager Silver Solids are a benchmark of performance in this price range. Stager even sells half-meter lengths for $70. If your components are nestled closely together and you can get away with it, then this option will allow you to save a little more money.

The performance is excellent, the price is attractive, and Marc Stager also offers a 30-day money back guarantee. I have no doubt that they will outperform, or at least perform as well as, many other higher priced interconnects. You may just save yourself a whole lot of money to spend on -- music! What have you got to lose?

In the upcoming months I will be comparing and evaluating two other pure silver interconnects I have received from Audio Marginal who are based in Montreal, Quebec, Canada. These are unshielded, twisted pair designs that use pure silver (sound familiar?). Their interconnects are priced at $200 per meter and $300 per meter, respectively. The lower priced model uses 22 gauge solid silver conductors in a Teflon insulation while the other uses 22 and 32 gauge silver in Teflon. To add fuel to this fire, I hear that Audio Magic and Kimber has some new bargain interconnects hitting the market. Times are good for bargain hunting audiophile!