Last month Doug Blackburn broke the news on a new, budget-type amplifier from designer Dave Belles. Products such as these are always of great interest to me since I feel that these sanely priced products are of far greater interest and importance to most of us than the wild, the exotic, and the unbelievably expensive that many reviewers insist on dwelling on.

Dave Belles' name appeared on his own brand of amplifiers that were produced through the 1980s. Belles' last stint was as the main designer of the highly regarded OCM series of high-end amplifiers and preamplifiers (now a wholly-owned subsidiary of Magnum Dynalab Ltd.). Belles has since struck out with his own company called Power Modules, Inc., once again producing amplifiers with the Belles moniker on their faceplates. His goal is to produce serious high-end amplifiers, at budget prices. Real bang for the buck type stuff. The $1,195 150A will soon see a companion line-stage preamp that will retail at an estimated $995. 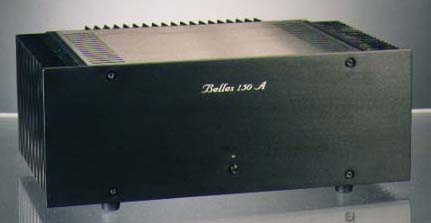 The 150A is low-key in appearance. It sports a traditional, sturdy black chassis with heat sinks flanking each side. It is well built, although the appearance is rather utilitarian. Forgoing the sparkle and pizzazz obviously helps keep the costs down. The appearance and designs goals behind the150A are reminiscent of the Forte series of amplifiers designed a number of years back by Nelson Pass. Although I always liked the 50 wpc class A Forte Model 1A, I ultimately owned the 200 wpc class A/B Model 3. Regardless, both amplifiers were exceptional for the price, rivaling and sometimes bettering much more expensive amplifiers. Like the Forte amps, the 150A is a no frills design that avoids unnecessary cosmetics and expensive metal work in order to deliver its high performance in a cost effective package.

With its ability to deliver 100 wpc into 8 ohms and 175 watts into 4 ohms the 150A should be sufficient power to form the heart of most audio systems. When I reviewed the Newform Research R8-1-30 loudspeakers I indicated that there are many reasonably priced, yet powerful, amplifiers on the market that would likely match well with the speaker. The 150A is exactly the type of amplifier I was thinking of. As I heard for myself, the 150A easily drove Doug Blackburn's Vandersteen 3As to high-volume ecstasy.

Power is only a few chapters of the story. How an amplifier delivers that power is what most audiophiles are concerned with. The musical finesse of the amplifier, if you will, is the key to the heart of most 'philes. Overall, the 150A shows extremely good refinement, detail, and frequency extension. Separation, and the ability to present a wide and deep soundstage, was also very impressive. Clarity, particularly through the midrange, is outstanding. The musical performance of the 150A is exceptional and brings true high-end down to real-world prices.

And just how well did the 150A hold up against some of the best? Doug also hand on hand the venerable Clayton M-70 monoblock amplifiers. The M-70s deliver 70 watts of pure Class A power into 8 ohms and can double that into 4 ohms. Marc Mickelson, Doug Blackburn, and I agree that the Claytons are some of the finest amps we have heard and their $5600 asking price makes them good value among the higher cost amplifier crowd.

Were the M-70s better than the 150A? Yes they were. And so they should be at that price. And exactly how were they better? Despite being slightly lower powered, the Clayton amps gave the impression of being somewhat more powerful with an increased level of control. There was a sense of weight and heft behind the Clayton presentation. In a nutshell, the Claytons had more presence. The Claytons were also a tad more refined sounding. They exhibit the finest in detail and pristine clarity; these characteristics set apart the great from the very good in an absolute sense. The performance characteristics I am describing are subtle -- underline subtle. You are almost squeaking in with amplifiers such as the Belles - but not quite. The type of improvement one finds when moving to higher priced amplifiers is one of refinement. It is that extra few percentages of performance that one has to pay so dearly for. Depending on your values, and mostly your pocketbook, it is up to you to decide how much having 'the best' means to you.

There are a number of amplifiers in the sub-$2000 range that can give you a clear window to high-end heaven and offer much of the performance of the finest amplifiers. Bryston, McCormack, Aragon, and Warner Imaging are a few that come to mind. These are amplifiers that deliver scads of great performance at comparatively bargain basement prices. Add Belles to that list. Even if you are shopping for a much more expensive amplifier, you owe it to yourself to check out the 150A. It really is that special.