Blue Circle's BC-3 preamp, with its stainless steel chassis and large wooden control knobs, looks just different enough to give it a distinctive visual elegance. Still, the BC-3 retains enough of a conventional design appearance so as not to stand too far out in the crowd. I own a BC-3 preamp and it looks and sounds outstanding. Its companion, the BC-2 monoblock amps, take the unusual Blue Circle design philosophy another rung up the ladder. Like the BC-3, the BC-2 is primarily the design of Blue Circle's own Gilbert Yeung.

A few months ago Gilbert made a personal guest appearance at my apartment to ensure proper setup of his gear. He was midstride uncrating these behemoths in my listening/living room when the phone rang. It was Elsa, co-habitator of my too-small apartment. She was out shopping at the time, but was anxious to learn how much more living space we were going to lose to another set of equipment review samples.

"So, what do they look like?" she chirped. Gilbert had just laid the second amplifier on the floor. The shiny, stainless steel frontplate caught a hint of sun and glistened at me.

"Uh, sorta like someone parked a Rolls Royce between my speakers!"

"They are big honey. REALLY big. And, yeah, they kind of look like the hood of….."

"Not a hood!" Gilbert suddenly interjected. 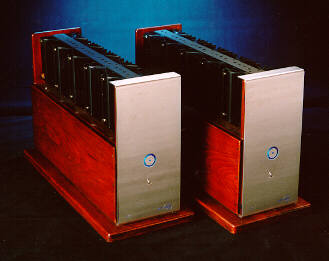 Yes, I had to agree. With their heat-sinks running the length of the amplifier top, they look like each five cylinder side of a V-10 engine. They are almost as big too!

Whatever your take, they are certainly unique in appearance. The BC-2 is long (25.5 inches) and fairly tall (16.2 inches), but not very wide (10.25 inches). The amplifier is a monoblock design, so you need two.

Although the front panel is stainless steel, the entire chassis is crafted from wood. Yes, wood! Gilbert had made a BC-2 in a metal chassis, but "it didn't sound as good," he said. Wood, on the other hand, had more appropriate resonant properties and that is why it was chosen. Available finishes for your amp? Black Oak is the standard finish. Optional finishes include Red Cherry, Golden Oak and Satin Black, as well as other finishes based on request. To my eyes, the Red Cherry finish is their finest and matches my Von Schweikert VR-3 speakers and Sound Rack equipment stand nicely. When Elsa arrived home that day she again gasped, but grinned and said, "those look great!"

The unique design extends to the heart of the amplifier matter. The BC-2 is a tube/transistor, single ended design. There may be other such hybrid designs, but it is the first I know of. The BC-2 uses a

single tube (per amplifier) for voltage gain. Transistors are used for the output stage which gives it superior drive capability. I would guess its closest relative would be the fine, solid state single-ended amplifiers from Pass Labs. Like some of the Pass Labs models, the BC-2 provides sufficient power to feed a wide variety of speakers. In the BC-2's case it pounds out 75 watts per channel. Gilbert Yeung even drives his own Martin Logan CLS's with a pair of BC-2's, a notoriously nasty load.

I had first heard the BC-2 amplifiers at Stu McCreary's place and read about them in the pages of Positive Feedback. Suffice it to say that Stu thinks very highly of the BC-2's. Hearing his system, I can only agree. Driving his VR-4.5's, the sound is rich, full bodied, wonderfully detailed, with a massive soundstage. Stu has one the most musically enjoyable systems I have ever heard.

I have since listened to the BC-2's under a variety of system and room conditions. In my own room I used the BC-2/BC-3 combination with my Theta digital front end, Von Schweikert VR-3 and Coincident Technology Troubador loudspeakers, and Nirvana wiring throughout. The more I listen to the BC-2, the more convinced I am that the Blue Circle Team has struck an ideal balance, incorporating most, if not all of the benefits of tube and solid state design. The BC-2 shows lightning fast response, awesome detail and the limitless frequency extension of the best solid state amps. At the same time there is a wonderful harmonic richness and tonal accuracy like the best modern tube amp designs. This is achieved without a hint of grain, tizziness, bloating, or excessive warmth. Depth of the soundstage is the best I have heard. Recorded detail, ambience, and the sense of air and space are awe-inspiring. The result is, as with the BC-3 preamp, that I cannot categorize the BC-2 as having either a tube or solid state character. Instead, it simply presents a wealth of musical information in a most natural and engaging manner.

Single ended designs do not sport reputations for being bass monsters. These deeds are normally left to the big-boy solid-state amps from the likes of Krell, Classe, Bryston, and Rowland to name a few. In summary, the BC-2 does not have the blast you to the back of the room power that the big solid state amps are capable of. But I was more than thrilled to find that the BC-2, driving the Von Schweikert VR-3 speakers, reached every bit as low in extension and had bass detail that equaled, if not surpassed, my Classe amp. What the BC-2 does not ultimately deliver is raw, unlimited power. My Classe Fifteen (175 wpc), for example, can produced drum tracks and the like with a heart-felt whallop, whereas the BC-2 does not pack quite the punch. If you want brute force solid state power, you may better the Blue Circle, but I'll wager that you will have a tough time approaching the finesse of the BC-2.

After all is said and done, and as good as the BC-2 amps are (and believe me, they are that good), I have learned that it takes a special type of audiophile to own a pair. First, the BC-2's are not only large, they are red hot! After an hour of listening the amps throw off a heatwave you can feel from 3 feet away. The only place I can imagine locating them would be on the floor, between or behind your speakers, with plenty of airspace around -- not tucked inconspicuously into a cabinet. Gilbert assured me that despite the large amount of heat, none of the components are being stressed to more than a fraction of their rated power. Next, there must be an appreciation for the design, construction and appearance. While some may balk at the use of wood for a chassis, it must be remembered that wood was chosen first for its specific sonic characteristics. As well, the BC-2 is a hand-made product inside and out. Each chassis is finished and assembled by hand. Internally, no circuit boards are used, it is point to point wired throughout. The result, I find, is the ultimate in audiophile elegance. Finally, at over $6000 USD per pair the perspective buyer must have a substantial disposable income. This is the only reason I do not own the BC-2 amps. Simply, I live within my means, these are beyond. But I envy those who can afford them. These people will be treated to state of the art, musical performance.

There is no doubt in my mind that the Blue Circle BC-2 amplifiers are of reference calibre. Are they the best amplifiers in the world? That, unfortunately, is a question that I do not think I will ever be able to answer. With wide varying loudspeaker designs, power requirements and personal sonic preferences I don't believe any amplifier will ever reign supreme. However, the BC-2s are among the best amplifiers I have heard and if I ever find myself holding an extra $6,000, I will own a pair.

On a final note:

At about $6000 USD the BC-2 amps are very expensive. For a product like this to warrant any kind of recommendation there has to be a customer commited company behind it. I am relieved to say that although Blue Circle may be a small company, they have taken a world class approach to designing, packaging and presenting their products. The day-in-day-out operation of the Blue Circle products was flawless. The BC-3 amps turn on with a 3 second soft start circuit and there is a 30-35 second delay until the speaker output engages. No thumps, bumps, or crackles whatsoever. Furthermore, Blue Circle has built in exhaustive protection circuitry for the amplifiers and the speakers they are driving. Finally, the products are packaged with good user documentation and well designed packaging to ward off the UPS scratch and dent team. Well done Blue Circle!